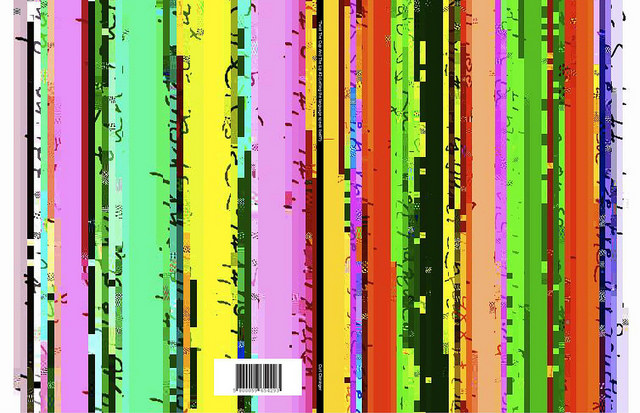 Curt Cloninger, “Twixt The Cup And The Lip #3 (Letting the language speak itself?),” 2011. On view in “glitChicago” at the UIMA.

A museum survey of Chicago’s innovative glitch art scene opening this month provides a good moment to revisit the city’s deep legacy of media arts. This is where contemporary art intertwines with emergent communications technologies—video, analog and digital computers, and repurposed commercial imaging technology—whatever artists could get their hands on. The local scene is today propelled by many do-it-yourself makers, but heavy academic support in decades past helped media arts flourish here. Some observers have noted that new media art evolved out of Chicago’s experimental music subculture. Curator of “glitChicago,” Paul Hertz says that glitch art, like hacking, is an artist’s answer to Big Media; the movement revives discarded electronics and advocates for open sharing of tools and content. “glitChicago” shows August 1 through September 28 at the Ukrainian Institute of Modern Art, 2320 West Chicago.

1936: Nathan Lerner, a student at the New Bauhaus in Chicago, stands in traffic medians to photograph the patterns of traffic lights. Lerner later invents the light box.

1947: “Vision in Motion,” Moholy-Nagy’s manifesto, is published in Chicago one year after his death. The book makes a case for the marriage of art and technology, and would inform art and design curriculums for decades at the School of the Art Institute and the Illinois Institute of Technology.

1968: Artists Bill McCabe and Robert Frontier put their penises on a copy machine, creating some of the first copy-machine art in Chicago. By 1970, these alternative printmaking machines become the basis for the Generative Systems program at the School of the Art Institute of Chicago, spearheaded by Sonia Landy Sheridan. 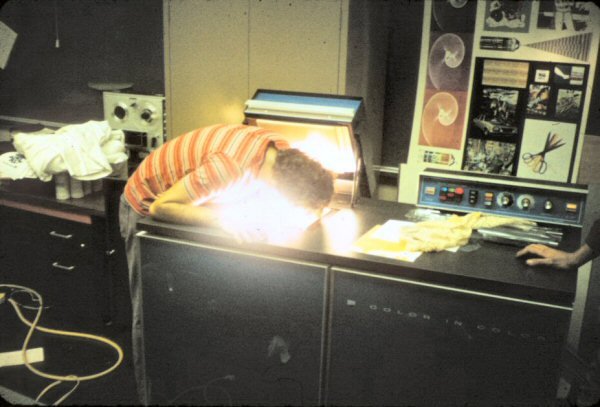 1973: Dan Sandin invents the Image Processor. Modeled on the Moog synthesizer, it is one of the first computer image processors, and created especially for artists to edit video art by manipulating color and wavelength patterns. It is also used during live video art performances. Many of these can be viewed at the Chicago-based media archive Media Burn.

1973: The Electronic Visualization Laboratory (EVL) is established at the University of Illinois at Chicago. It is a cradle of virtual reality and early computer graphics (with a free online archive of published research). Merging computer programming with visual art, the graduate program awards MS and PhD degrees in electronic visualization.

1983: “When I think of computer art I think of Chicago,” writes Gene Youngblood in “Computer Art as a Way of Life.”

1992: Artist JNO Cook creates “scary machines” such as his “Rottweiler Camcorder,” a video camera mounted to a dog to capture the world from the dog’s point of view. The art is shown at Beret International Gallery in Chicago.

1993: Thirty thousand people attend “Nature of the Machine,” an exhibition of kinetic and biokinetic art at the Chicago Cultural Center. 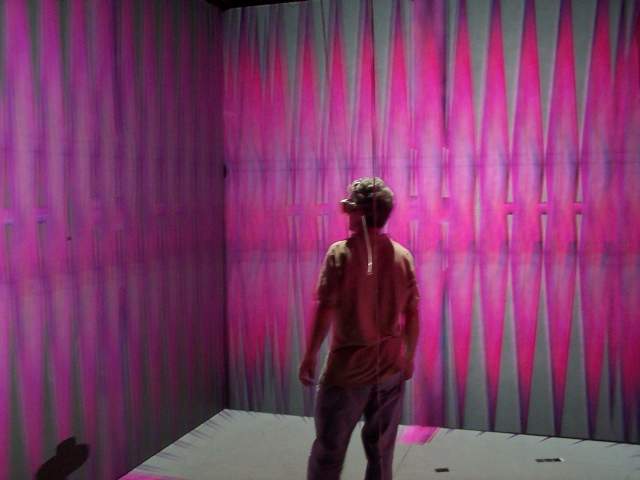 1995: Virtual reality is perfected in Chicago with the CAVE, and is exhibited at Gallery 400 at the University of Illinois at Chicago. CAVE is a room with computer and video projections on three walls and the floor, with audio accompaniment, immersing viewers in a simulated environment, such as a virtual torture chamber in Tom Coffin’s “Jaws of Death” and a rollercoaster in Jason Leigh’s “Vomit Mountain.”

1996: JonCates makes his first animated GIF art. Later, he opens an archive of internet GIFs, the Institvte for the Animated GIF.

2009: The Museum of Holography in the West Loop shutters.

2010: An exhibition of Second Life art shown at Antena in Pilsen.

2010: A summit for teenage girls advocates for greater exposure of women in the gaming scene. “Future of Girls, Gaming and Gender” is held at Columbia College Chicago.

2013: Hack Arts Lab at the University of Chicago opens. It provides open-access to digital art-making tools.

2014: Tom Burtonwood is artist-in-residence at the Art Institute of Chicago, and creates 3D-printed reproductions of the museum’s collections in the Modern Wing.

2014: Nick Briz leaves Facebook. He publishes a video tutorial “How To/Why Leave Facebook” as a piece of internet activism. Briz says he has used Facebook for as long as he has been a media artist.