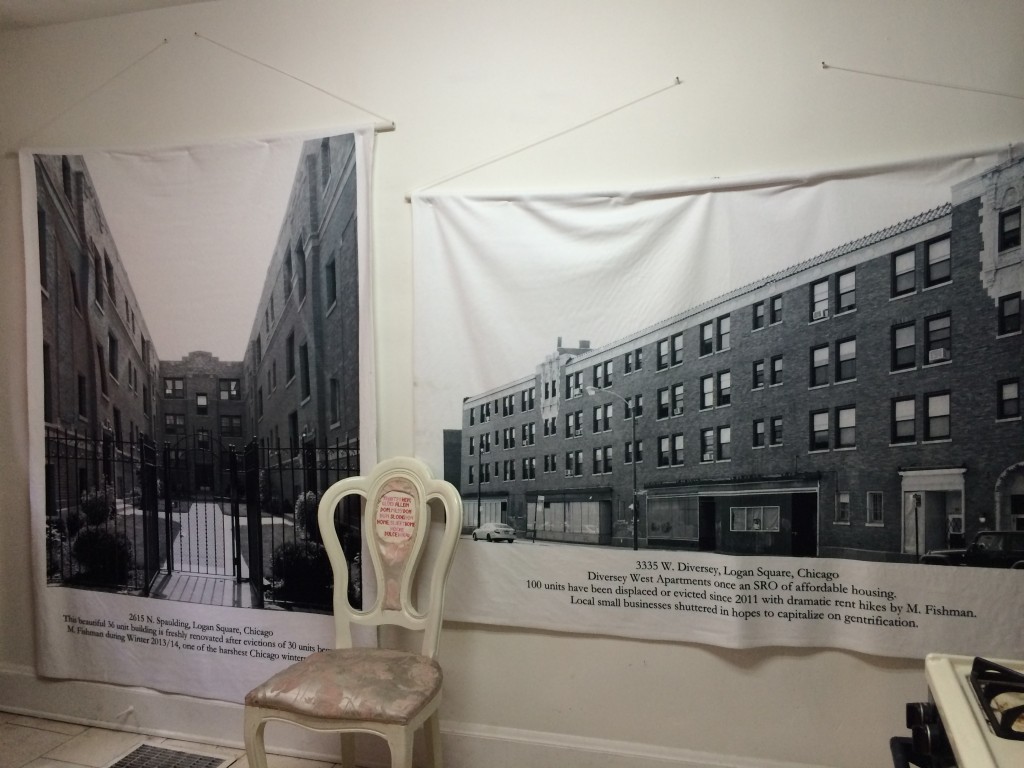 After Amie Sell’s photo installation “Home Sweet Home” was unceremoniously removed from the Milwaukee Avenue Arts Festival on June 27, she began to meet with other spaces and curators to find somewhere else to present the censored artworks. As Newcity reported at the time of the controversy, Sell’s works criticized gentrification in the Logan Square neighborhood, including real estate developer Mark Fishman, who is the owner of the building in which the works would have been exhibited.

When Traci Fowler and Trevor Schmutz heard about Sell’s work, they invited her to adapt the installation to be shown in Kitchen Space, their apartment gallery in Logan Square. On Sunday, August 3, the new installation of “Home Sweet Home” opened in the two artists’ home, where it will remain on view through August 24. On Sunday, August 17, Kitchen Space will host a lunchtime discussion (tentatively scheduled from 1pm to 3pm) about the issues of gentrification and affordable housing in Logan Square that Sell’s work has researched.

In follow-up emails after Sell’s opening, Schmutz writes: “We wanted this show because we felt that this is really important and even if only a few people end up seeing it, those people learn about issues relating to affordable housing and efforts to gentrify our neighborhood. This is a problem that has the potential to effect a large percentage of the Logan Square community and we saw this work and Amie’s efforts to get the information out there as a starting point for us and others to realize what is happening around us.”

The gallery was opened in April by Fowler, who is finishing up her BFA from Columbia College, and Schmutz, who graduated from the same program in May. After Sell’s exhibition closes, they will host a two-day screening of video art on August 30-31 from 11am to 11pm on both days that will be installed in the kitchen and throughout the rest of the bedrooms, living room and bathroom. Visit the gallery’s Facebook page for more information about their upcoming programming. (Matt Morris)