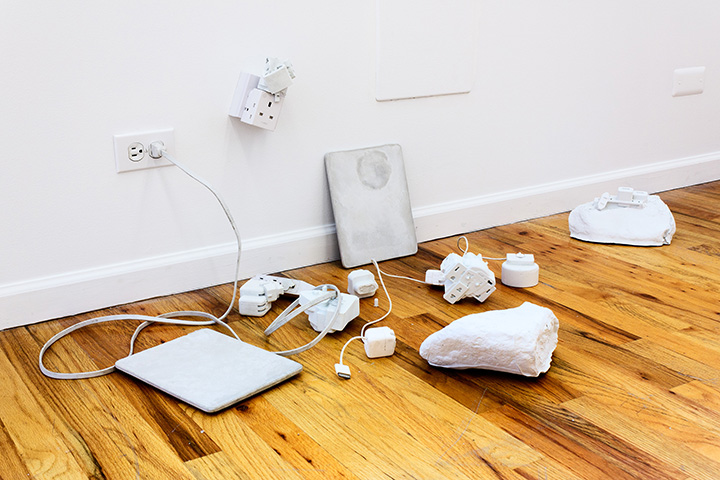 Regards’ inaugural exhibition “Murmurs” features clean, precise exercises in subtlety by eight different artists. The labored pieces featured speak to silent, meditative hours spent in the studio while the restrained execution of the show provokes consideration of the subtleties of interaction and communication. There is something slightly out of reach about most of the work, a whisper-like inaccessibility that intentionally frustrates the viewer. Christopher Aque obscures disquieting images of TSA pat-downs with thick layers of pigmented Vaseline. Lauren Spencer King’s silver leaf on glass panel “Moonlight” is unpredictable, reflecting the sunlight blindingly or disappearing into the gallery white walls entirely depending on the angle of observation.

Ethan Rose has included six sculptures from his “Movements–Multiples” series. The plywood planks each hold five music box mechanisms that have been individually modified. Tines are bent back and rendered useless or broken off altogether. The works beg to be touched; when wound up (even the enticing winding sound intoxicates) they play eerily altered versions of an identical composition. Each viewer creates their own unique experience by choosing which of the devices to activate; in this way Rose’s original score will never be complete and exists only as a suggestion. 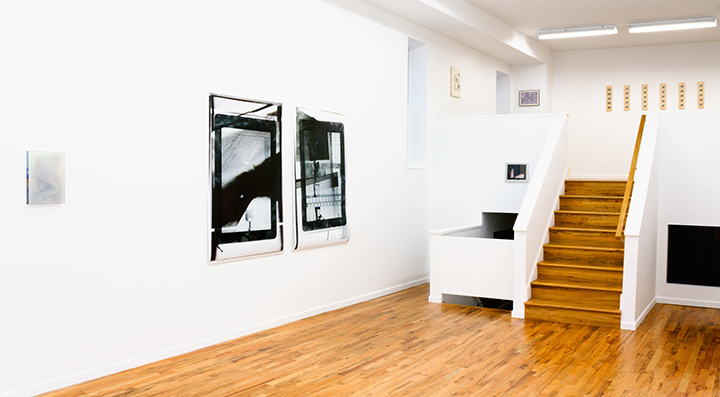 Installation view of “Murmurs” at Regards

Andrea Longacre-White’s prints and sculpture imply interaction by processing technological devices. Distressed black and white images of iPads are printed large from manipulated and degraded scans. These sheets are stapled directly to the wall and wear the scars of previous showings; this physical mark echoes the human hand inherent in her sculpture. Her quizzical floor-based assemblage consists of Apple iPad replicas, cast modular power sources and USB chargers. Plaster dummy versions of tablets are futilely plugged into the wall while additional cords coil throughout the tableau, connecting to 3D-printed sockets or nothing at all. By making the familiar unfamiliar and the functional redundant, Longacre-White’s works quietly question use-value and our increasingly fraught relationship with digital technology.

The discreet bodily presence demonstrated by Longacre-White’s work is consistent throughout the show. The works here are corporeal without being figurative; what good is an iPad without a hand to swipe it with? (Erin Toale)