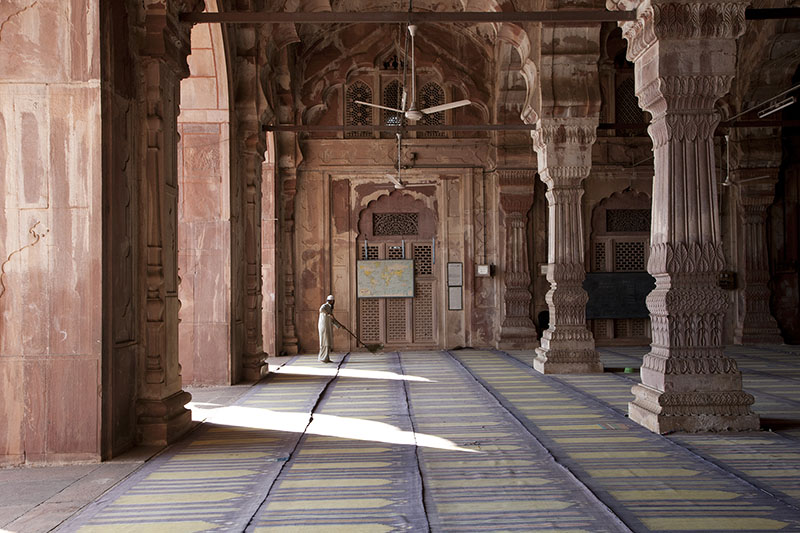 Taking clear and deceptively unassuming straight color images, globetrotting photographer Larry Snider has divided his most recent work between posed portraits of Tibetans in China and mainly depopulated interiors of old public buildings from the USA, Denmark, Cuba and India. The highlights of the show are the interiors, in which Snider has positioned his camera to capture intriguing designs composed of architectural details, displaying up-front a formalist side of his vision that he had previously subsumed under a concern with emotional content that characterizes his humanist portraits. Whereas in the past, it was important to know where Snider had shot his images since they function as documents of the life of a particular place, that is less significant now, because the interest of his interiors resides in the internal arrangement of photographic values (light, texture, line and shape, for example) rather than in their external references. In a particularly apt juxtaposition, a view of a distressed stone-walled room in India has been placed next to an equally distressed dance-practice studio in Cuba. Both interiors have been shot to emphasize rhythmic repetitive patterns along the walls that are enhanced by the textures and breaks provided by patches of decay and repairs. Through his use of depth perspective, Snider draws the viewer into the spaces, giving the feel of being inside them. Where the human figure does appear in Snider’s interiors, it becomes part of the composition, as in the strongest image in the show, in which we look down the long corridor of an Indian mosque and glimpse at the end of it a man sweeping the floor; his straight body and the rigid oblique broom form a perfect right-angle triangle, rooted in the floor, that has only the hint of human purpose to enliven it. (Michael Weinstein)