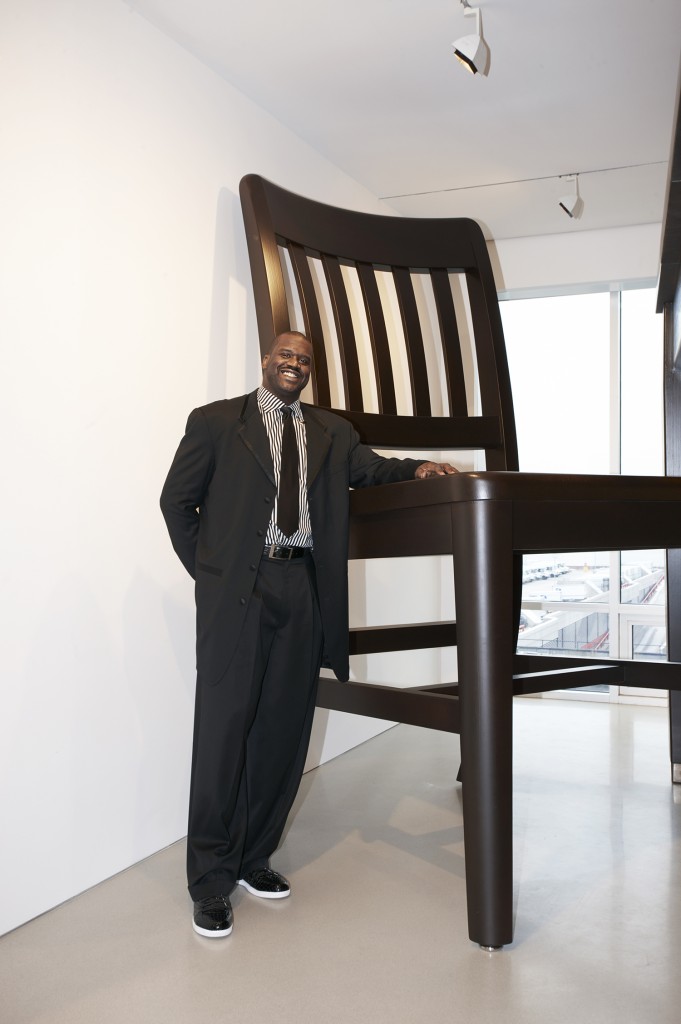 Shaquille O’Neal standing in “SIZE DOES MATTER,” an exhibition he curated for the FLAG Art Foundation in 2010

Yesterday EXPO Chicago announced that Shaquille O’Neal will be curating a booth for the FLAG Art Foundation in this fall’s iteration of the art fair. Entitled “SHAQ LOVES PEOPLE,” the project will consist of portraits produced by emerging and established artists of people across various races, cultures and ethnic backgrounds. This is the second curatorial project at FLAG by the fifteen-time NBA all-star turned entrepreneur whose other cultural work includes rap albums, reality television shows and film acting. In 2010 he curated “SIZE DOES MATTER” at FLAG’s gallery in Chelsea, which included artists such as Fred Wilson, Cathy de Monchaux, Kehinde Wiley, Lisa Yuskavage and Jeff Koons. This is FLAG’s first art fair project of any kind, and only its second exhibition outside of their New York City gallery space. It is one of more than twenty-five special exhibitions and projects by select regional and international museums, institutions, foundations and organizations that will complement the approximately 140 gallery booths in the 2014 iteration of the fair. In the press release, president and director of EXPO Tony Karman says, “Our Special Exhibitions and Projects programming adds an important facet to the exposition by deepening our global institutional partnerships and further enhancing the broad range of work for our arts patrons to experience.” Other special exhibitions are being organized by respected cultural institutions such as Whitechapel Gallery (London), Vox Populi (Philadephia) and Laumeier Sculpture Park (Saint Louis), along with Chicago-based organizations like Threewalls, Hyde Park Art Center, The Renaissance Society and the School of the Art Institute of Chicago. (Matt Morris)