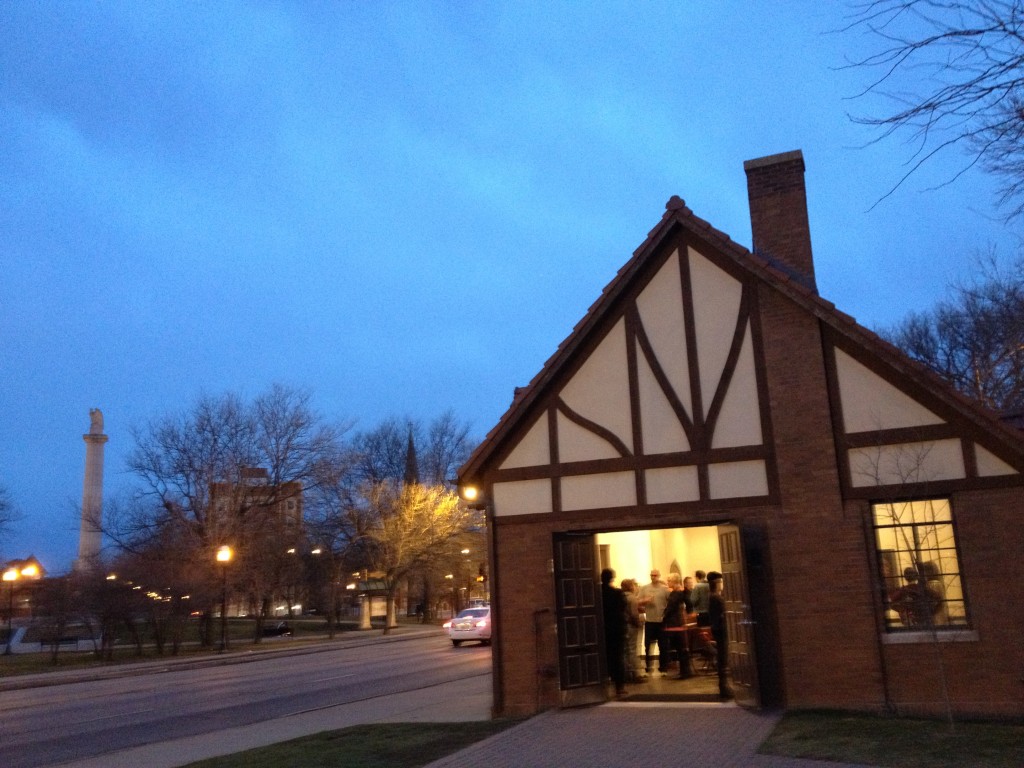 The Comfort Station in Logan Square

My first exposure to Comfort Station coincided with Matthew Hoffman’s 2013 exhibition “Independence.” A mysterious placard was erected in the shadow of the Illinois Centennial Monument. Like most of Hoffman’s work, it was aggressively present on social networks. In the background of some of the photos was a puzzling Tudor-style building that looked comically out of place in trendy Logan Square. The text read: “A motivational sign in a grassy field is nice and all, but it’s not going to do the hard work for you. That’s up to you.”

This wording resonates with the ethos and initiative of Comfort Station. It is a unique architectural landmark that places equal emphasis on both programming and exhibitions. In a recent conversation I had with both of the directors, Jordan Martins characterized their vision as such: “We identify as an ‘art space’ not just due to the exhibitions, but through all of our programs as a totality. The most important thing for us is the plurality, multiplicity and simultaneity of these events and programs and how they activate the space.”

The city-owned building was rented and restored in 2010 by the Logan Square Preservation Society. They hold the lease while a small team of volunteers operates the space. The organization is in the process of applying for 501(c)3 status and has received funding from the Propeller Fund and a Kickstarter campaign, as well as local businesses like Intelligentsia, Liberty Bank and Lula Café.

Founder and co-director David Keel stresses that they strive to produce programs that span the cultural spectrum, as community engagement was one of the founding principles of the space. In practice, this consists of hosting potlucks, screening movies by local filmmakers on the lawn in collaboration with The Logan Square International Film Series and staging art projects in the surrounding neighborhood. This broadly defined civic-mindedness is in keeping with the history of the building, as it was originally intended for public use as a safe, warm place to wait for the trolley (comfort station is an archaic term for bathroom).

The current show, “Picturing Logan Square, An Exhibition of Rare Images,” features black-and-white archival photographs which trace the historical trajectory of the neighborhood’s development. Some of the vintage, sign-laden images are innocuously nostalgic, whereas others are provocative on issues such as gentrification, sustainability and the area’s changing demographics. As Keel walked me through the exhibition, he oriented several of the photos by describing what presently exists in the space, leaving me with lingering questions about Logan Square’s future and what role the space will play in it.

Acknowledging the romance inherent in such an undertaking, Martins states, “It’s easy to have somewhat utopian ‘kumbaya’ thoughts about this. A lot of ideas we try out fail. That can be frustrating, but I also like how we can be a laboratory for those ideas, and cumulatively our programming grows around what gains traction.” In this way, Comfort Station is an apt title, as great possibility lies in experimenting without fear of failure. (Erin Toale)