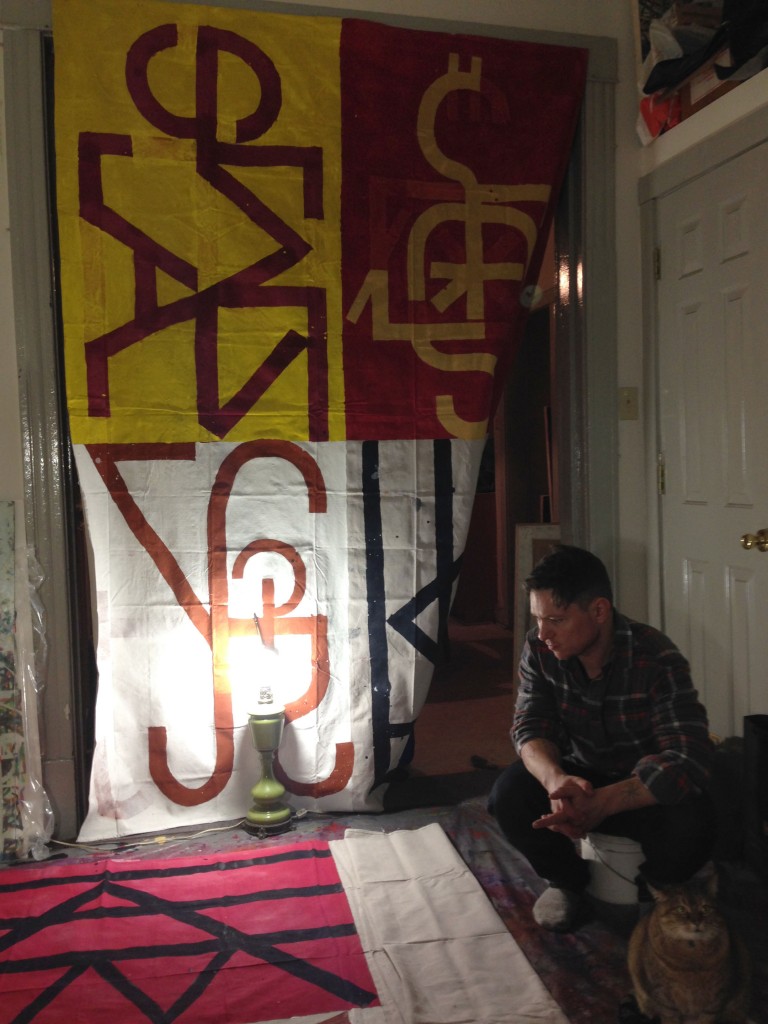 Elijah Burgher and his cat Monster in the artist’s studio/Photo: Ashley Dawson

I do not say that I believe in magic, just as I do not say that I believe in art. From a molar perspective, belief is only ever provisionally employed as a tool; otherwise, criticality is too easily short-circuited. I cannot separate the two—magic and art. One can speculate on their tangled roots, on the one hand; and verify in experience that they are two aspects of the same crucial faculty, imagination, on the other. I like Aleister Crowley’s definition of magic best: “the science and art of causing change to occur in conformity with will.” Will is the keyword here. Desire. Intention. 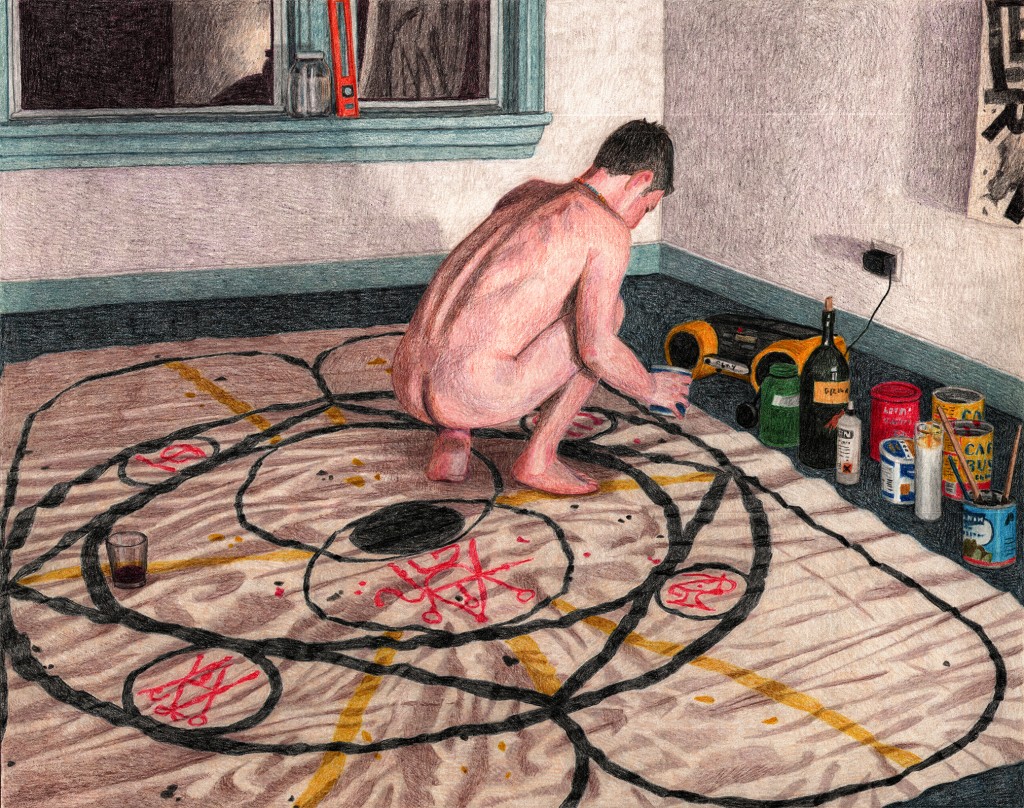 I was interested in magic and mythology from an early age, but it wasn’t until after graduate school that I began researching and playing with magic in a purposeful and consistent manner. The language of magic provided a more compelling and emotionally accurate way of describing and engaging reality. The thought experiment of ascribing magical efficacy to art helped me focus what I wanted to do with art and what I wanted from it. I regularly construct and charge sigils in the studio. Sigils are symbols for wishes and desires. I also regularly draw on practices from European ceremonial magic, such as drawing the ritual circle and banishing the four corners in conjunction with studio projects. I would not call these actions properly magical, however. Doing them in the studio brackets them in such a way as to be objects of reflection themselves. 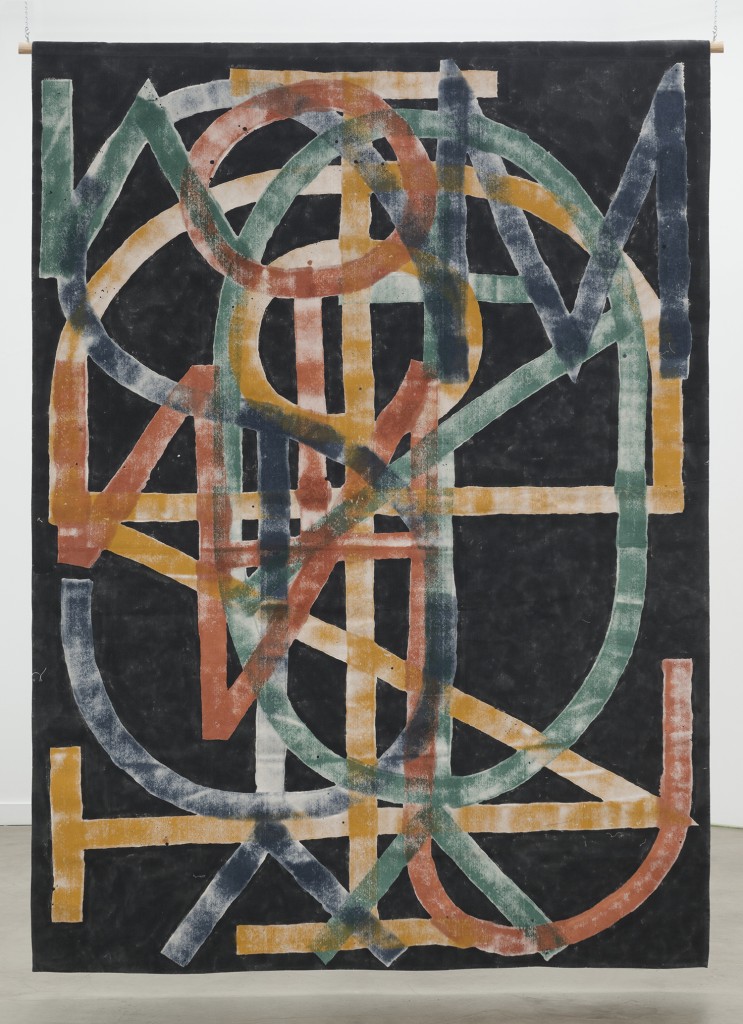 A lot of artists today are incorporating aspects of magic into their art. Much of it has to do with fashion but I think that there is something else at work in the upswell of interest—in ritual, in particular. My good friend, John Neff, suggested to me that this preoccupation with ritual reflects a desire for structures of daily life in a world where prior structures of the sort are quickly falling away. This is very much the case with many artists, juggling as they often do multiple part-time jobs, and making do with improvised live/work spaces, etc. Toggling amongst the many roles we play in daily life is a bit like “paradigm shifting,” a thought experiment advocated in Chaos Magick in which the practitioner adopts conflicting philosophical positions in rapid succession in order to loosen the yoke of any one belief system as well as make the Self more malleable. It almost constitutes a “daily ritual” in and of itself. That said, in order to access the richly free-associative state of mind required for acts of imagination involves certain rituals, usually negative ones akin to abstinence or fasting, in my case intentional avoidance of the Internet and devices of communication technology.

One of the research studios I regularly teach in the spring at the School of the Art Institute of Chicago is called “Atavistic Resurgence,” concentrating on how ideas and practices from magic, the occult and shamanism can be utilized to focus studio practice. So, for instance, we look at different divination systems and use them as lens to engage chance and accident in the studio. Incorporating rituals and other practices from magic and the occult may provide young artists with an alternative way of structuring their career aspirations by focusing the divide between art and life differently than we are currently accustomed. It is too easy to slip into an utterly cynical but functional attitude toward the art system, losing sight of art’s promise of being something, anything, other than a pure commodity. That said, money may be the most occult thing of all, if by money we mean a metonym for the mysteries of late capitalism.

(As told to Matt Morris)