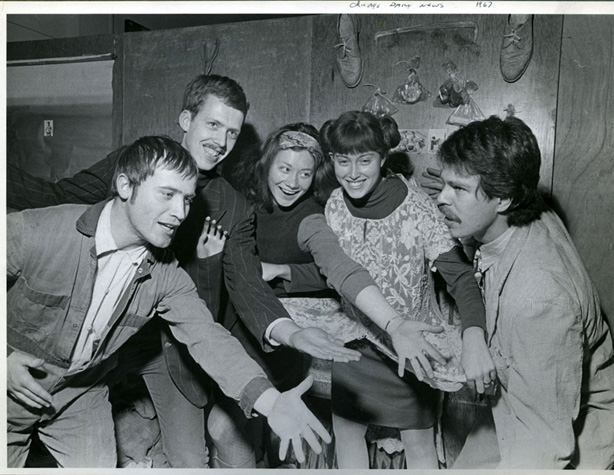 The Gene Siskel Film Center has announced that in the first week of October it will host a run of Leslie Buchbinder’s first feature-length film, “Hairy Who & the Chicago Imagists,” a documentary that introduces broader audiences to the lively Chicago-based art movement that contested the primacy of Pop Art in the 1960s with wacky and cleverly funny cartoon figurative painting. The documentary will screen daily from Friday, October 3 through Thursday October 9 (full schedule here). Friday’s screening on opening night will feature appearances from director Leslie Buchbinder, producer Brian Ashby and editor Ben Kolak. Then on Sunday, artists Jim Falconer, Art Green, Gladys Nilsson, Jim Nutt, Suellen Rocca and Karl Wirsum will be present at the 5:30pm screening. On the last evening of the run, Thursday, October 9, Ashby returns with screenwriter/music advisor John Corbett and sound designer/engineer Alex Inglizian.

The documentary is constructed from more than forty interviews with the Imagist artists, critics, curators, collectors and contemporary artists who cite these wily players among their biggest influences. The documentary tracks the now-legendary origins of the Imagists’ Hairy Who exhibitions at the Hyde Park Art Center beginning in 1966 and the ways that Imagist work entered into and faded from the collective contemporary art imagination. In particular, Buchbinder looks at the quality afforded women artists among this Chicago group, a progressive view of gender in the art world for that time. In the film’s promotional materials, these artists are described as “the most famous artists you never knew.”

Buchbinder, a multi-arts maven who was nominated to the Committee on Prints and Drawings at the Art Institute of Chicago in 2011, drew together a formidable crew in producing this buoyantly heartfelt paean to one of Chicago’s most important contributions to contemporary art history. Lilli Carré, a rising art star who is currently exhibiting “The Pleasure of Getting Lost,” a solo show at Western Exhibitions in the West Loop, worked as the film’s animator. In addition, John Corbett, one half of the gallerist team Corbett vs. Dempsey and author of numerous books on Imagist artists, served as a writer for the film.

In her director’s statement for the film, Buchbinder writes, “These artists have informed my life—and the lives of so many others—in ways that I never could fully apprehend until I had the great privilege of making this film. For several decades, Chicago was animated by a thrilling, art-provoked world of exhibitions, festive events, and camaraderie. Today, time seems to be bending yet again: the artists collective known as the Chicago Imagists are achieving ever-broader recognition among new generations of artists and art-lovers around the world.” (Matt Morris)

The Gene Siskel Film Center is located at 164 North State.