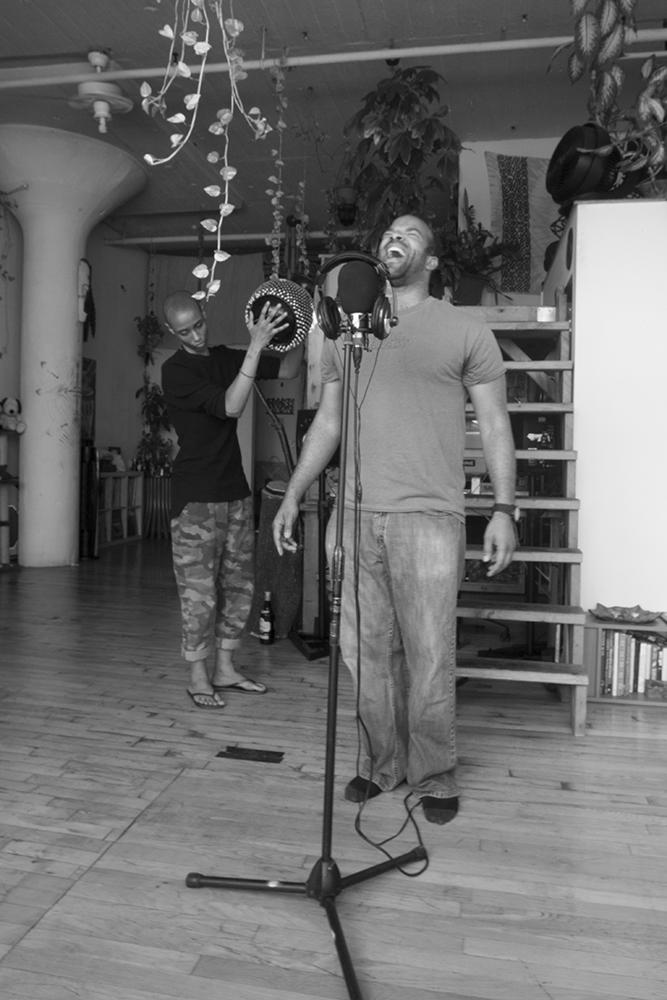 Val Jeanty and Douglas Kearney rehearsing “Freedom of Shadow: A Tribute to Terry Adkins” at Jeanty’s studio in Brooklyn/Photo: zkonqü.

This Saturday, September 20, the Poetry Foundation will present a performance of “Freedom of Shadow: A Tribute to Terry Adkins.” The oratorio is written for solo voice and digital turntables by Douglas Kearney and Val Jeanty. In conjunction with the performance, the foundation exhibits a site-responsive calligraphic wall painting titled “ulteriori ombre” by Drury Brennan. The performance begins at 6pm on Saturday and will run between thirty and forty-five minutes. It is free and open to the public.

Terry Adkins was a formidable contemporary art force who was known for his research-based sculptural objects that were designed to be activated during performance. Last year, the Block Museum of Art at Northwestern University presented a traveling survey of Adkins’ work that was punctuated by “Facets” a provocative performance of richly designed collaborations with NU music students and artists such as Clifford Owens and Tameka Norris. Adkins passed away in February 2014 on the eve of his inclusion in the 2014 Whitney Biennial.

“Freedom of Shadow: A Tribute to Terry Adkins” riffs on the title of a book project by Adkins entitled “Shadow of Freedom.” Begun as a grant-funded collaboration between Kearney and Adkins, the project continued to evolve after Adkins death. Poetry magazine published an essay by Kearney that offers compelling insight into the creative process by which this performance piece came about, in particular the way that the early stages of his work with Adkins became some of the primary material considered in the project. Kearney writes, “Freedom of Shadow records and transforms the material we actually managed to create in collaboration: our emails, conversations and discussions of each other’s work. It presents this discourse as antagonisms and accords, duets and theatrical environments.”

Both Kearney and Jeanty’s own creative practices move across disciplines as Adkins has done previously with projects that are simultaneously musical, dance and sculpture. Poet and performer Kearney has published two books of poetry including The Black Automaton from Fence Books in 2009 and teaches at CalArts. Haitian composer Jeanty has presented “Afroelectronica installations” internationally, includong New York’s Whitney Museum and MoMA. 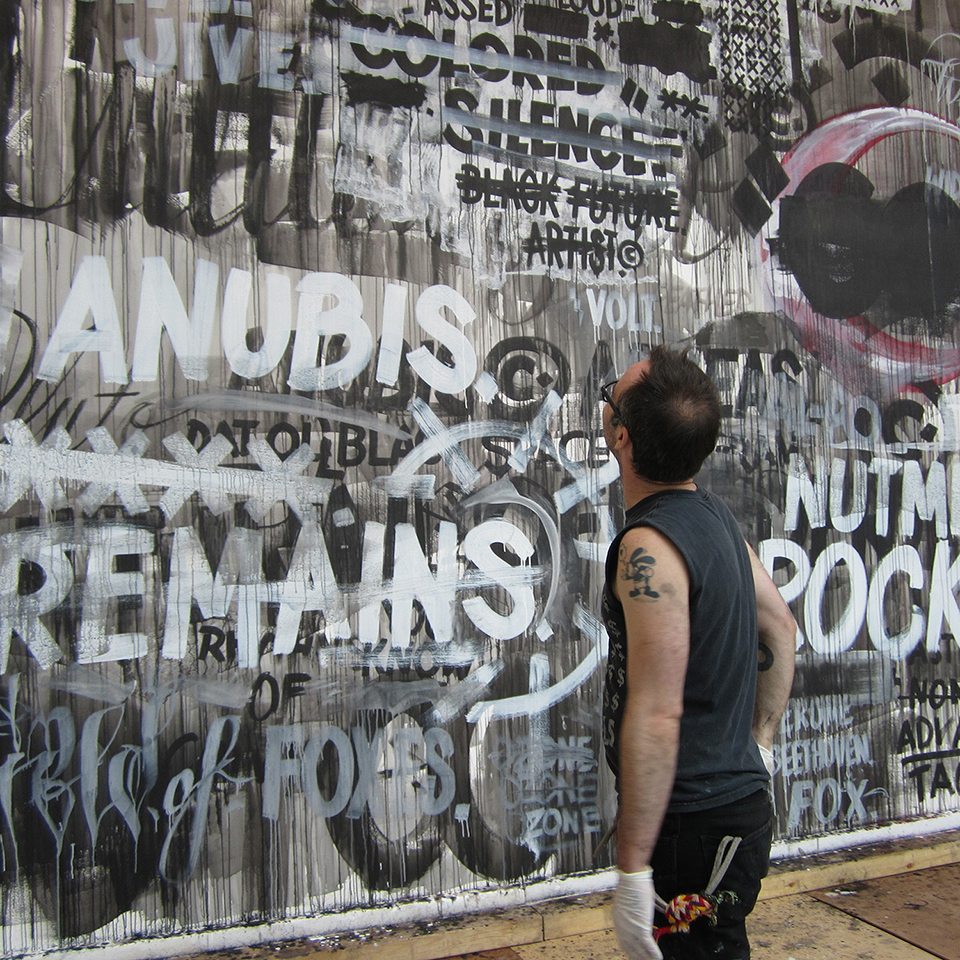 Kearney and Jeanty’s work will be in keeping with Adkins’ sensibilities for performances that don’t shy away from the confrontational. In an email to Newcity, Poetry Magazine Art Director Fred Sasaki writes, “The work will be hard. Hard language, hard sonics, hard conversation. And the libretto itself can be called ‘concrete’ (Kearney himself says ‘performative typography’). The work is intentionally framed as ‘a threat to modernism,’ a note Kearney penned early in his collaboration with Adkins. So one should expect a hard threat to convention.”

The hard language of the performance served as inspiration for the accompanying wall work by Brennan. Writes Sasaki, “Drury Brennan’s work is a calligraphic reaction to the libretto, in honor of Douglas Kearney, in tribute to Terry Adkins—in conversation with both. The work is in part a reverberation of Adkins’ and Kearney’s first one-on-one conversation about their collaboration, in particular the first note Douglas took, which served as mooring: ‘behavioral feeling of performed ethnicity.’” Brennan’s exhibition remains on view through October 24. (Matt Morris)