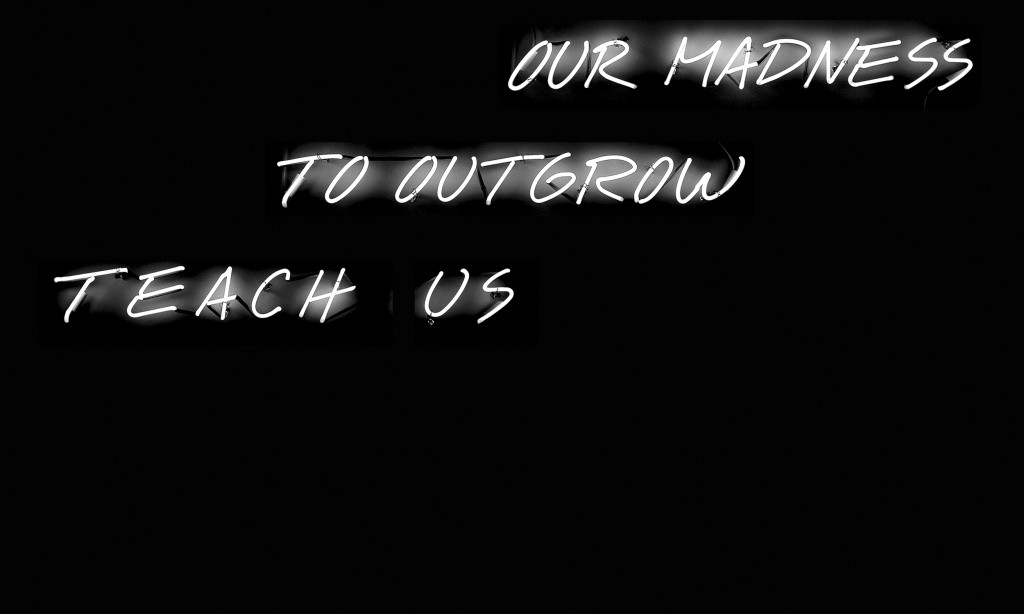 Visitors to this year’s Expo Chicago can expect to see an abundance of works outside commercial gallery booths that speak to ecological threats, the consequences of international conflict and similar socially motivated creative concerns. Human Rights Watch presents a large-scale neon installation by Alfredo Jaar, “Teach Us to Outgrow Our Madness,” working with text dealing with generational learning from Nobel laureate Kenzaburo Oe. The Laumeier Sculpture Park opens their World’s Fair archives to New-Delhi based RAQS Media Collective, who will invite visitors to participate in a project elucidating colonial ideologies.

“Expo has been completely committed to highlighting social justice issues that take the pathway through visual arts. It’s almost totally unique for a commercial art fair in the country to do something like this,” says Elizabeth Corr, manager of art partnerships and events at the National Resources Defense Council. Expo Chicago president/director Tony Karman asserts that collaborations with non-profit institutions enhance the experience of Expo’s patrons through innovative educational projects while expanding global partnerships. For the past three years the NRDC, an organization that supports the protection of natural habitats, has been one such organization invited to present work within the context of Chicago’s annual international art fair.

In response to the boisterous setting of 40,000 visitors, NRDC funded a project by its current resident artist, Chicago-based Jenny Kendler, who constructed an intimate dome space for their booth, “so that,” she says, “people would be able to encounter the work on their own terms and not be looked at and photographed, and have some privacy in the moment.” Inside “Tell It To The Birds,” a shelter lined with a psychedelic camouflage of lichen-printed fabric, visitors are invited to confess to the natural world, speaking into a microphone nested within its own protective dome of essential oil scented lichen. A recurring theme in Kendler’s work, lichen was chosen for its qualities as a cross-species collaboration (plant and fungus), as well as an air-quality indicator. Within a soundscape of softly twittering birds, the confessor’s voice will be translated sonically into its own avian equivalent, a Short Billed Dowager, the Lesser Prairie Chicken or perhaps the Rufa Red Knot. The hybrid voices point to the permeable boundaries between the human and animal worlds. The birds will also be represented in futuristic sculptures, whose sale will go partly toward the organization. Though a third of the world’s bird species are threatened, the artist chose eleven, taking into consideration the quality of their songs and advice from the NRDC’s team of scientists and policy makers.

“We can talk all day about policy and lawsuits, but those aren’t the things that generate emotive responses in people or make them want to connect to the environment,” says Corr. “Maybe it angers people or makes them feel like there’s nothing they can do [but an artwork] opens up a whole different avenue of connections with their work.”

Socially and politically engaged works that contemplate the future are also the focus of the site-specific installation series IN/SITU, both within the exhibition halls and along the lakefront. Curator Renaud Proch worked with DCASE and the Chicago Park District to choose work from gallery submissions that highlight Chicago’s history and character, as a “proud, rich, sprawling, political, extreme, contradictory, beautiful, [and] segregated” American city.” Although for sale through the galleries, many of the works will be on display to the public during and after the fair. 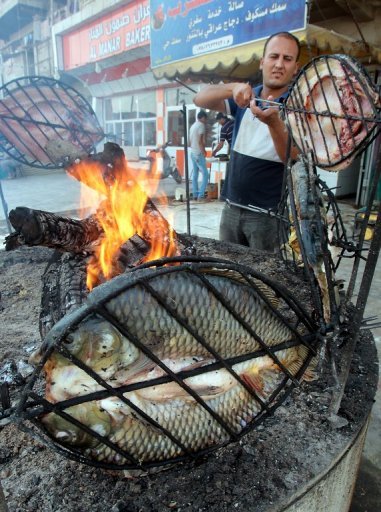 Traditional preparation of masgouf, the fish dish to be prepared as part of Michael Rakowitz’s “Every Weapon Is A Tool If You Hold It Right”

Chicago-based artist Michael Rakowitz’s “Every Weapon Is A Tool If You Hold It Right,” a project that transforms relics of destruction into an apparatus for forging new recipes, is planned to take place on Navy Pier. Asian carp, an invasive species, caught within Chicago-area waterways by Iraqi émigrés and US veterans of the Iraq War and currently stored in SAIC’s Sullivan Galleries as part of the “A Lived Practice” exhibit, will be prepared with knives made by Saddam Hussein’s personal sword maker, and cooked on stakes made from Iraqi and American Bayonets in a pier-side fire-pit. Public audiences will have the opportunity to taste the complex Iraqi national dish, masgouf. This project is presented and commissioned as part of “A Proximity of Consciousness: Art and Social Action,” on view at the Sullivan Galleries, School of the Art Institute of Chicago, September 20-December 20, 2014. On Sunday, September 21, weather permitting, Rakowitz’s cooking pit will be set up on Navy Pier from 12pm–4pm.

Visitors, artists and galleries have the opportunity to initiate and explore meaningful dialogues, such as in the moderated discussion “What Do Your Politics Get From Being In My Art?” with Jim Duignan, Michael Rakowitz, Abigail Satinsky and Duncan MacKenzie Saturday, September 20, 11:15am at the fair. Through the inclusion of non-profit organizations, public space, artists with Chicago ties and a curatorial commitment to works highlighting the human condition, Expo can offer participatory experiences beyond the purview of a traditional commercial art fair.