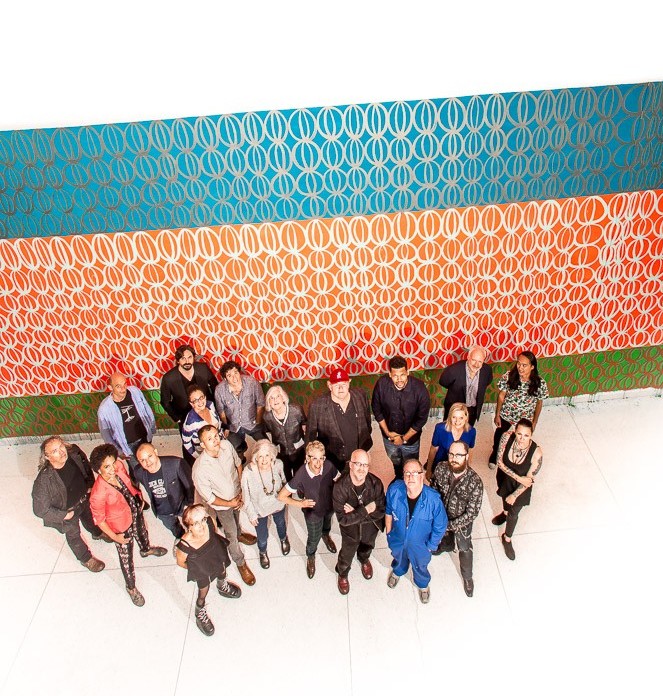 If you’ve spent any amount of time observing or participating in visual art in Chicago, you know it’s more community oriented and inclusive than competitive or exclusive. In Chicago, everybody’s in, and no one is out. That said, Newcity publishes this ranked list of influential artists every other year in order to celebrate the accomplishments of a few people who work hard and smart, and who happen to call Chicago their home. The Art 50 also serves as a primer for newcomers—know these names and their practices and you can start to understand Chicago art pretty quick. This year we rotated out a bunch of artists who made the pick in 2012. This doesn’t mean we don’t care for their artwork anymore; we just wanted to open up the list for more voices to be heard. (Jason Foumberg)

All photos by Joe Mazza/Brave Lux on location at the Smart Museum of Art, the University of Chicago. Top photo in front of Judy Ledgerwood’s “Chromatic Patterns.”

1
Theaster Gates
Few artists have promised as much as Theaster Gates, so expectations are continually high. Simultaneously occupying and moving between the ninety-nine percent and the one percent, Gates’ Rebuild Foundation has projects in St. Louis, Chicago and Omaha, and Gates himself has built an international profile with demand for his work reaching a high point in 2013 with a Pinault Collection commission. Locally, the Currency Exchange Café in Washington Park is now open, and major plans for the 95th Street CTA terminal and The Stony Island Arts Bank are underway. Skepticism of Gates may abound, but he’s changing the city more, and faster, than many other socially engaged artists have ever done.

2
Michelle Grabner
Michelle Grabner is an artist, writer, teacher and curator-at-large. She co-founded both the artist-run project space The Suburban and the idyllic nonprofit contemporary art venue Poor Farm, and admits that she prefers organizing exhibitions in these casual contexts over ones that are “properly institutional.” Like, for example, the 2014 Whitney Biennial, which she co-curated. The experience left her disillusioned about the state of art criticism (she called the practice a “blood sport” in the Huffington Post.) She writes via email, “It still troubles me that there was so much work that went unaddressed because critics and journalists instead kept their attention focused on the politics of the exhibition as if they were new problems. I understand that it is always easier and more inflammatory to wrestle with the structural problems of the biennial. But it really was troubling that more artwork wasn’t critically parsed.” She’s featured in the (so-hot-right-now) Soho House collection, will hang a solo exhibition at James Cohan Gallery (NYC) next month, and has another solo show at the Indianapolis Museum of Art in May 2015. When asked how she responds to the criticism that she wears too many hats, she deftly replies, “You learn quickly that that is the rant of jealousy or desire… Comments like those tell you more about the source than the quality of your contributions.”

3
Chris Ware
Graphic novelist, comic book artist and cartoonist Chris Ware (who found his humble beginnings within this very publication) works at the vanguard of visual storytelling, and is a hero of the commix resurgence. In 2012, he produced to great critical acclaim the ephemeral “Building Stories,” a non-book book. In a review of the work, the New York Times called Ware “remarkably deft at balancing the demands of fine art, where sentimentality is an error, and those of storytelling, where emotion is everything.” (When asked for comment, the famously self-deprecating Ware said he agreed with the observation but considers himself more daft then deft). He’s collaborated with Ira Glass on a multitude of projects including “This American Life.” His illustrations are frequently featured on the covers of national publications (such as his heartbreaking response to the Sandy Hook school shootings for the New Yorker) and, in 2002, became the first comic artist to be included in the Whitney Biennial. He’s about to launch a new strip, “The Last Saturday,” has three new book projects in the works, and will be featured in the upcoming exhibition “The Comic Art and Architecture of Chris Ware” at the Art Institute’s Ryerson and Burnham Libraries.

4
Kerry James Marshall
Internationally considered one of the foremost painters of his generation, Kerry James Marshall has depicted figurative, multi-layered scenes of the black experience in America throughout his three-decade career. In 2013 he became the sixth artist featured in the National Gallery’s Tower Galleries, joining the likes of Mel Bochner and Mark Rothko. His joining David Zwirner in London, with a solo exhibition opening October 2014, further testifies that Marshall is one of the “big boys” in the international circuit and continues to call Chicago home base.

5
Laurie Jo Reynolds
“Legislative artist” Laurie Jo Reynolds co-organized a group called Tamms Year Ten to successfully shutter the Tamms Correctional Center in southern Illinois, notable for its sensory deprivation technique for prisoners. Now she is working on Governor Pat Quinn’s reelection campaign and was just hired as the University of Illinois Chicago’s first ever Assistant Professor of Public Arts, Social Justice, and Culture, leading the way for activist art to take root in a major public education institution. Her work with Tamms Year Ten is on view this fall in “A Proximity of Consciousness” at SAIC and in “Citizen Culture: Artists and Architects Shape Policy” at the Santa Monica Museum of Art.

6
Jason Lazarus
Of his many occupations (artist, educator, writer) Jason Lazarus well deserves a moniker coined by the late Robert Heinecken—as a “paraphotographer,” one who asks questions associated with the cultural and material conditions of photography. Lazarus is co-founder and co-editor of Chicago Artist Writers, an online platform that encourages experimental journalism and off-the-beaten-path arts coverage for emerging artists and writers. Lazarus is celebrated for his involvement in the collaborative feature-length film “twohundredfiftysixcolors.” Premiered last year, this film made entirely of GIFs has enjoyed an international presence and continues to screen domestically. Lazarus is faculty in the department of photography at the School of The Art Institute, and is represented by Andrew Rafacz Gallery in Chicago.

7
Dawoud Bey
At the entrance of the top floor of the 2014 Whitney Biennial hung a portrait Dawoud Bey had photographed of Barack Obama in 2007 just as he rose to his presidency. But deeper in the exhibition, selections from Bey’s “Birmingham Project” represented some of the most human and urgent themes operating within the glut of work on view—all the more provocative, scary and pressing seen alongside the horrific racism that has incited Ferguson, Missouri, and the rest of the country this year. These works stem from research into the 1963 bombing of a church in Alabama and related acts of racial violence that resulted in the deaths of six young African Americans. For his photographs Bey pairs a young person who is the same age as one of the victims when they were killed with a grown person the age that young adult would be today were they still living. Other iterations of this project have been shown in 2014 at Chicago’s DePaul Art Museum and Mary Boone Gallery in New York. Bey’s wisdom that is well carried by this series is also invested in his community fostering, including teaching at Columbia College, chairing curatorial committees at Hyde Park Art Center and urgent art writing.

8
Jessica Stockholder
Chicago hasn’t seen so many conceptual-painting-found-object hybrid installations since Jessica Stockholder came to town in 2011 to chair the department of visual arts at the University of Chicago. In the coming months she has three exhibits in Italy, including the Milan Triennial, and debuts a new commission in San Francisco. That her work also displays a vibrant youthfulness, coupled with the renaissance of appropriation in post-internet art discourse, Stockholder is perfectly at home in the here and now. She is also (finally) represented locally with Kavi Gupta Gallery.

9
Temporary Services
Self-described as “non-commercial since 1998,” the artist-collective Temporary Services serves as a model for alternative cultural projects in Chicago and abroad. Now run by Brett Bloom and Marc Fischer— Salem Collo-Julin left earlier this year to focus on independent art projects—this fall the duo is focusing intently on beefing up the inventory of their imprint Half Letter Press, with fifteen new titles by Bonnie Fortune, Oscar Arriola and George Wietor of Issue Press, among others. Fischer’s own essay, “Against Competition,” remains a rallying cry for young artists making their way in the contemporary art world.

10
Jim Nutt
After inspiring generations of the liveliest explorations into figurative painting and drawing with his early Imagist cartoon grotesqueries, in 1990 Jim Nutt narrowed his focus to a studied ongoing project of rendering female heads in painted and drawn portraits. More than twenty years hence, Nutt’s career has proven capable of taking hold of more than one legacy: while the lurid biomorphic revelers of his early work persists in coaxing younger artists to abandon in much the manner a Dionysian friend at a party urges you into too many drinks and the spiraling debauchery that follows, Nutt’s alternately reductive approaches are appearing in a starkly different context. Last year Daniel Buchholz in Cologne contextualized black-and-white linear drawings by Nutt with artists like Tomma Abts and Vincent Fecteau, a younger generation who weren’t even born at the time of the first Hairy Who exhibition in Chicago. In so doing, Nutt is experiencing more than just renewed interest; it seems he’s coming to be appreciated at more breadth and depth than ever before.