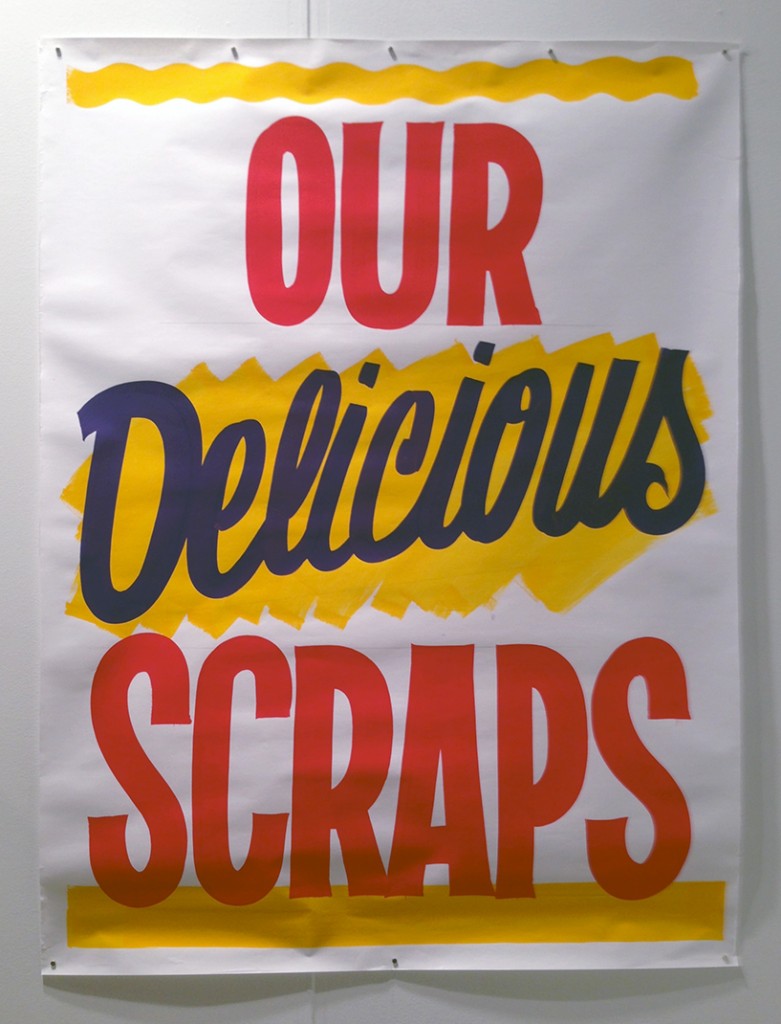 Bag of raw almonds for energy boost, false lashes stowed in my handbag for evening-wear eye-drama boost, press badge and a prayer for stamina: Expo Chicago’s press preview yesterday rolled directly into the Vernissage party that dispersed across town to a boat party, a disco dance and dishes of art world gossip: which gallery’s staff is jumping ship? who’s leaving their long-term gallery representation? who’s been exploring her ‘lesbian side’? who’s pregnant? and so on. Thursday’s kickoff to the fair was over-stimulating and today’s shaping up the same. I stopped for lunch and worked out some thoughts about patterns in the artworks exhibited, highlights and rare occasions for profundity for Expo visitors who are art lovers if not big-time collectors. 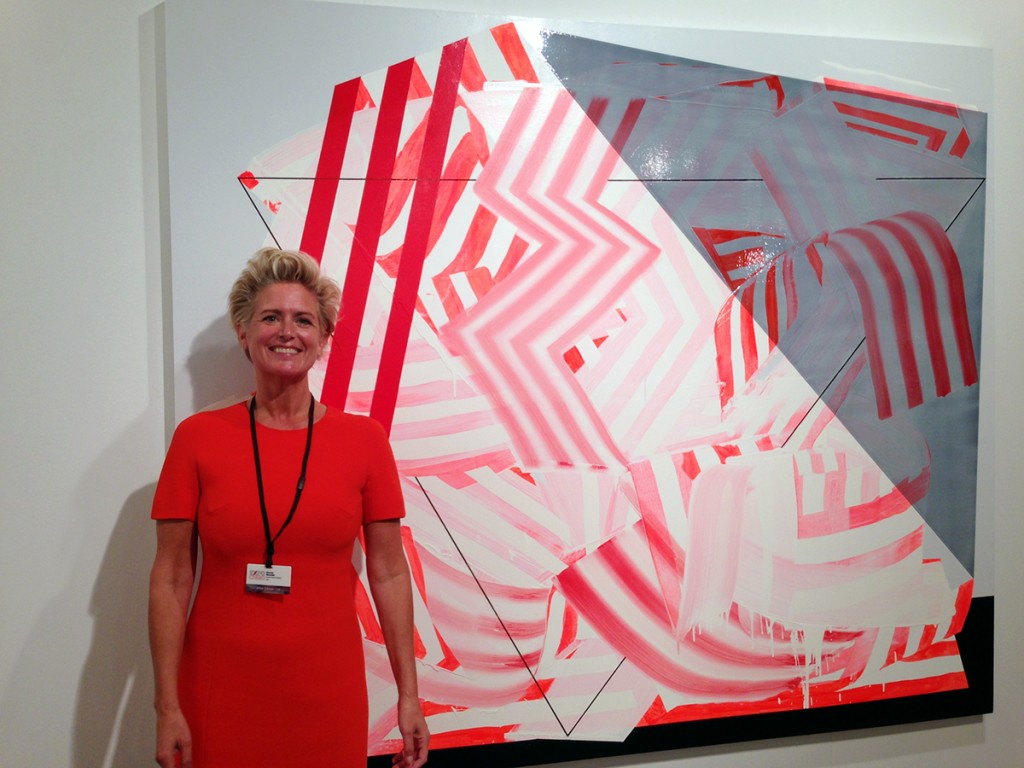 Safe to say that lest Chicago’s art scene sometimes feels like a small town, the larger global network of the art world isn’t much bigger. This year’s fair is a testament to infinitesimal degrees of separation, the ways that trends seem to clump so that one artist is shown across what feels like half of the booths, and the instincts on many gallerists’ part to contextualize new investigations in say, reductive abstract painting, with lesser works from yesteryear by great artists who paved the way for these more recent goings on.

Especially since the “great recession,” art-fair booths stock a self-reflexive humor as if to beat any of the marketplace’s detractors to the unseemly punch line that aims to determine if the art or the money matters more in these proceedings. (Clue: the money matters more, but isn’t it great that we can joke like this?) Every few booths, visitors will notice Mel Bochner paintings that are composed with one or many iterations of the phrase “blah, blah, blah.” These snarky text paintings colored in Willy Wonka palettes pop up all over the fair in numerous booths, curated in anticipation of the monotony of the sprawling showcase. Earlier this year, Bochner told ARTnews, “The paintings seem to touch some universal way of expressing people’s negativity.” Other anti-consumer sentiments abound, but a one-shot painted paper sign by Eric May in Threewalls’ booth (#740) is my favorite: seesawing between throwing some shade and issuing a “bon appetit” blessing, May’s sign seen here acknowledges the residual and the leftover that fills out these bazaars without getting lost in loathing. 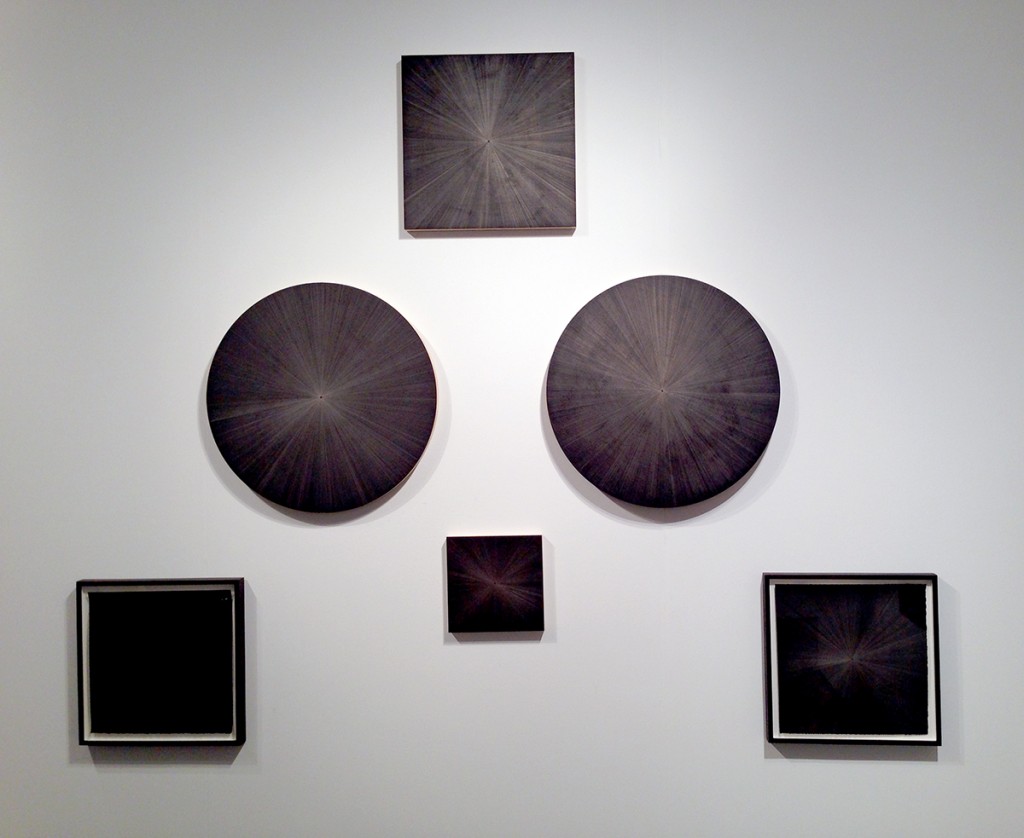 Where Is Grabner Most at Home?

In Newcity’s Art50, our bi-annual ranking of Chicago-based artists that landed on newsstands yesterday, Michelle Grabner is second only to Theaster Gates. And yet, it feels like overkill for at least three distinct booths to have positioned her prominently in the inventory on view. Grabner’s mobile collaboration with Brad Killam is treated as a blustery afterthought in James Cohan’s booth (#613) curated (and prominently featuring huge work by) Yinka Shonibare, MBE. While Santa Monica’s Richard Heller Gallery (#200) shows a nice grouping of Grabner silverpoints, they share the booth with a selection of works that are uneven and rather tasteless. Anne Mosseri-Marlio Galerie from Basel (#528) did very well comparatively speaking by pairing Michelle with Beth Campbell’s thought maps and hanging sculptural works that complement a simpler Grabner-Killam collaboration than what Cohan is showing. It’s great to see Campbell’s work in Chicago; her oblique storytelling and stimulating simulacra strike up lively dialogue with recent monoprints Grabner made this summer at Bard as well as Mosseri-Marlio’s own suite of metalpoint works. 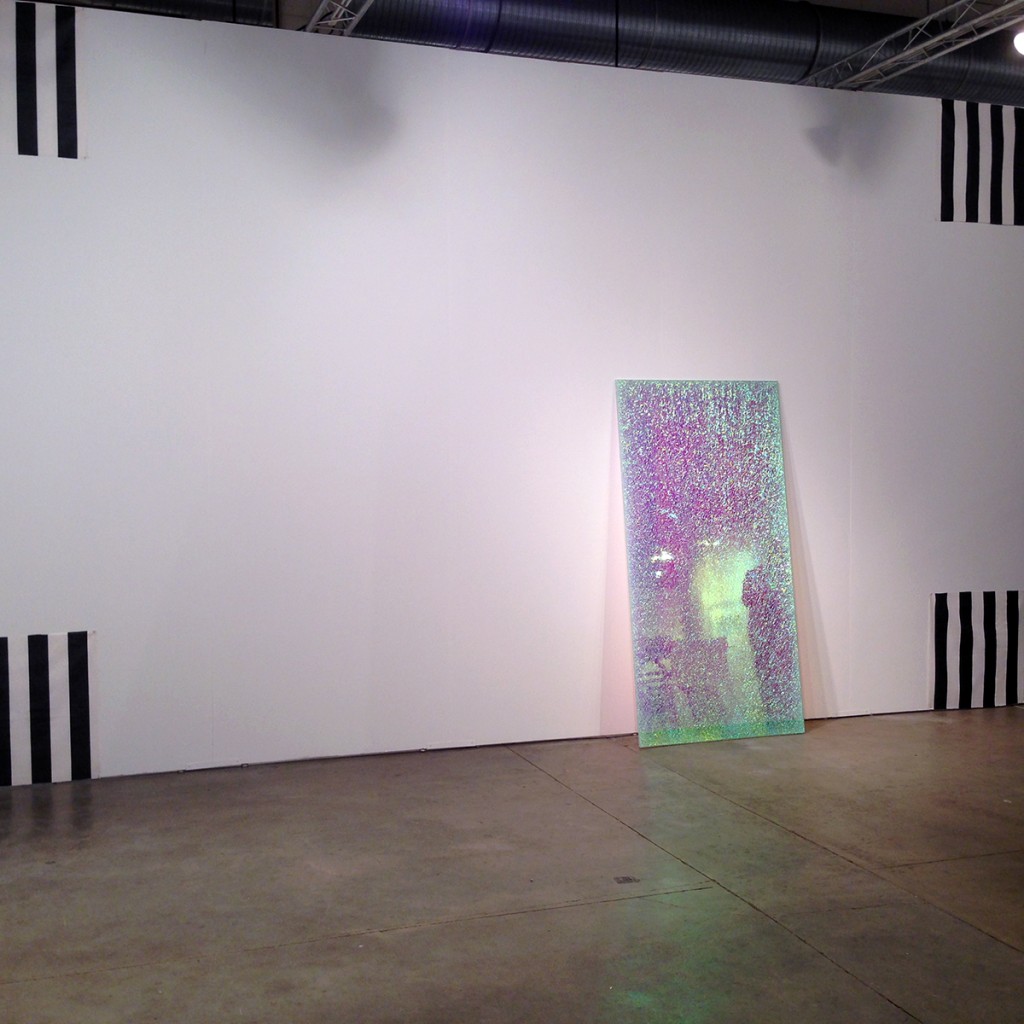 Grabner and Bochner aren’t the only artists with multiple appearances in the fair: Shonibare, Daniel Buren, Wendy White, Jose Lerma, Richard Serra and Louise Bourgeois all show up a few times, and one can’t help to ask who wore it better? 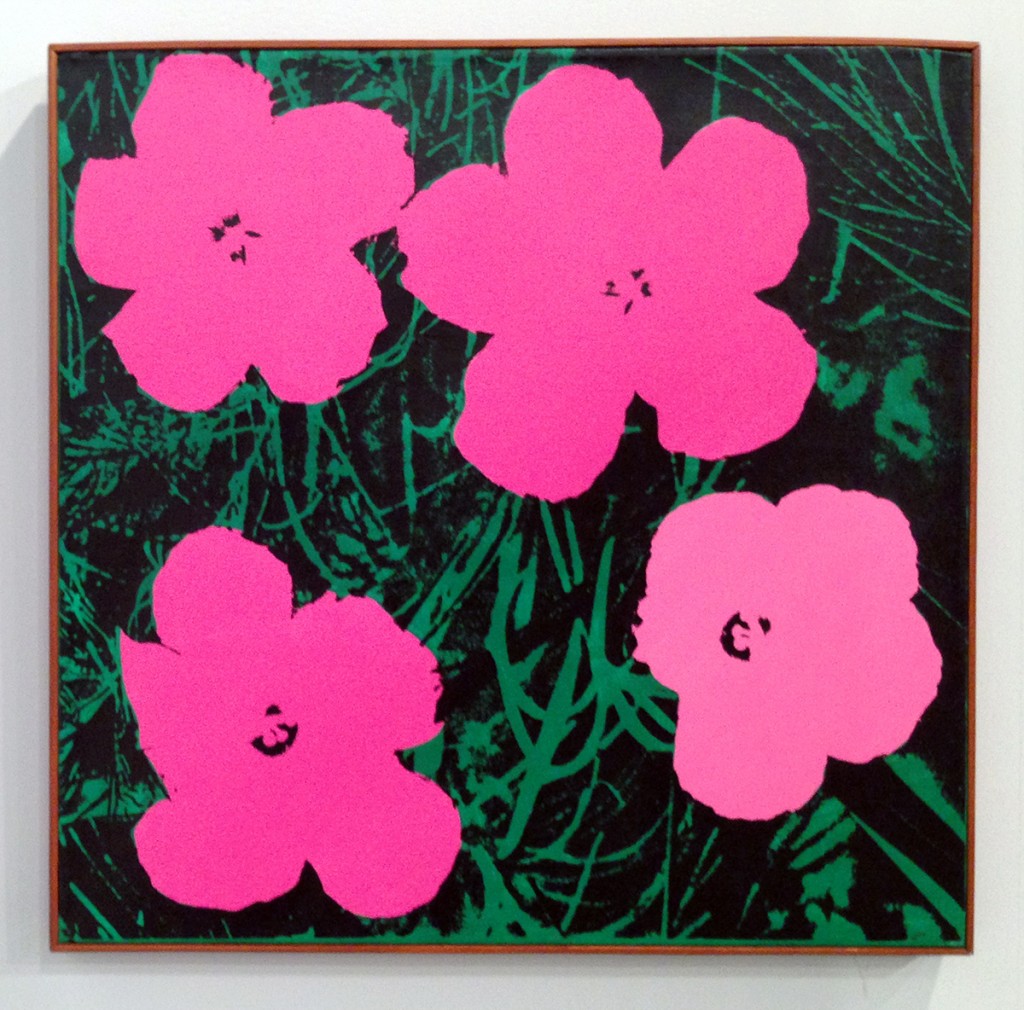 Additionally, the fair is replete with appropriations, send-ups and quotes from contemporary art history. It’s nice to see “Warhol Flowers” by Sturtevant at Shoichiro (#707). On a weird wall of half a dozen appropriations of Warhol imagery and techniques by other artists, there’s a crisp purity to her work that used Warhol’s own screens and production methods to make more of the paintings just with a different author. 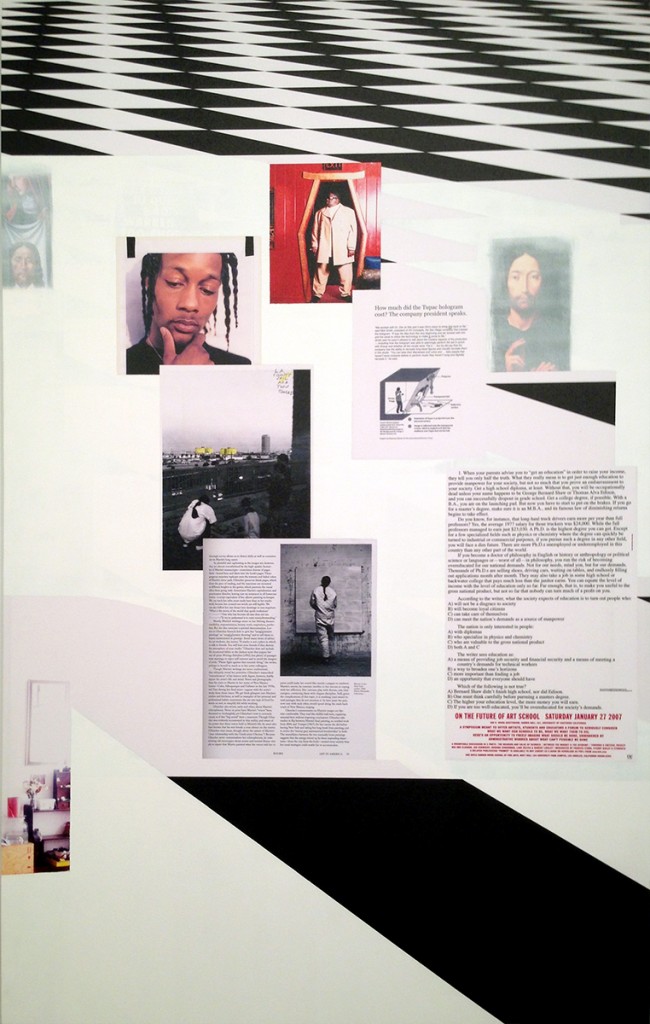 Frances Stark and Other Self-Contained Systems

Although I could have done without the loosely scattered silver floor piece, overall Marc Foxx’s booth (#512) stays with me for their clear decision to curate their space with weirdly demanding works that don’t necessarily bid for your easily distracted attention in such a hectic environment. In Frances Stark’s acrylic paint on inkjet print “Bobby Jesus’s Alma Mater, passage from a movement therein: Big Exit,” the seemingly disparate montage reflects the wordy thoughts of its title: an Art in America book review of writings by Agnes Martin, an explanation for how the hologram of Tupac Shakur was made and used in a Snoop Dogg and Dr. Dre concert, a flyer evaluating art education and a few images of Jesus. One reason the Stark work holds up is that it is an index of other sources, a sort of curatorial endeavor that treats the picture plane as a space akin to the booth it appears in. Priced for $35,000, every time I returned to this work throughout the day yesterday, interested parties were carrying on thoughtful discourses about it that were welcome but out of place in the greater shopping promenade. 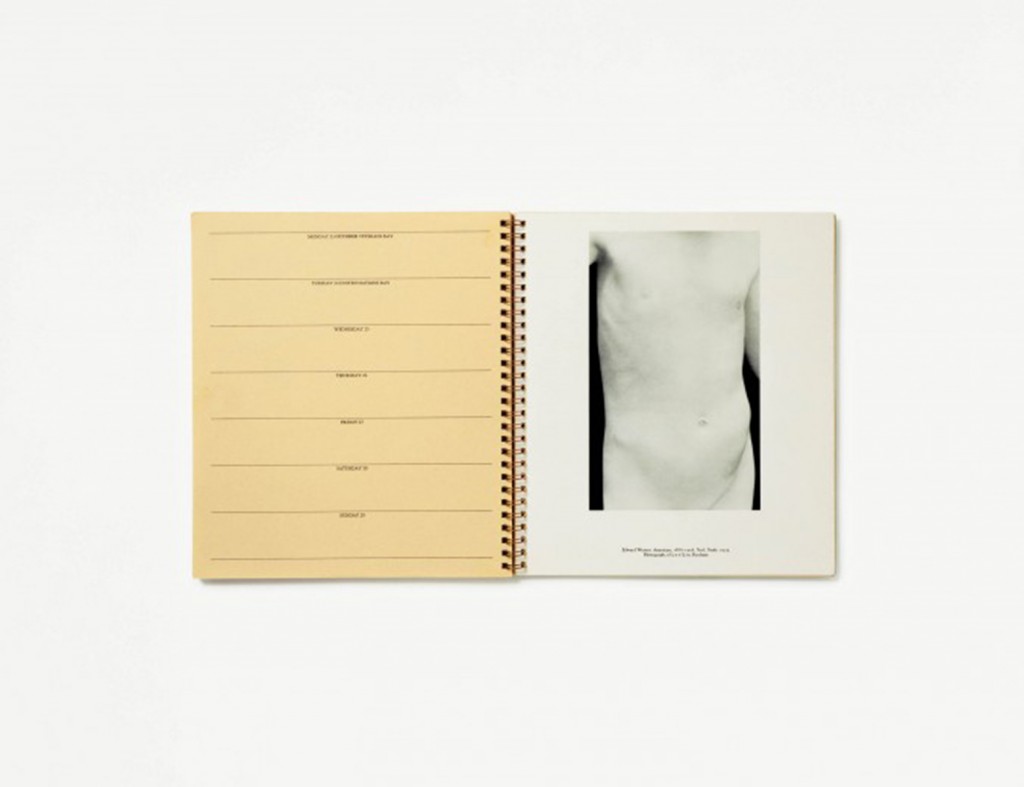 Stark hangs alongside several photographs by Anne Collier, including the cunning documentation of a calendar of nude images produced by MoMA that includes a portrait Edward Weston made of his young son Neil. 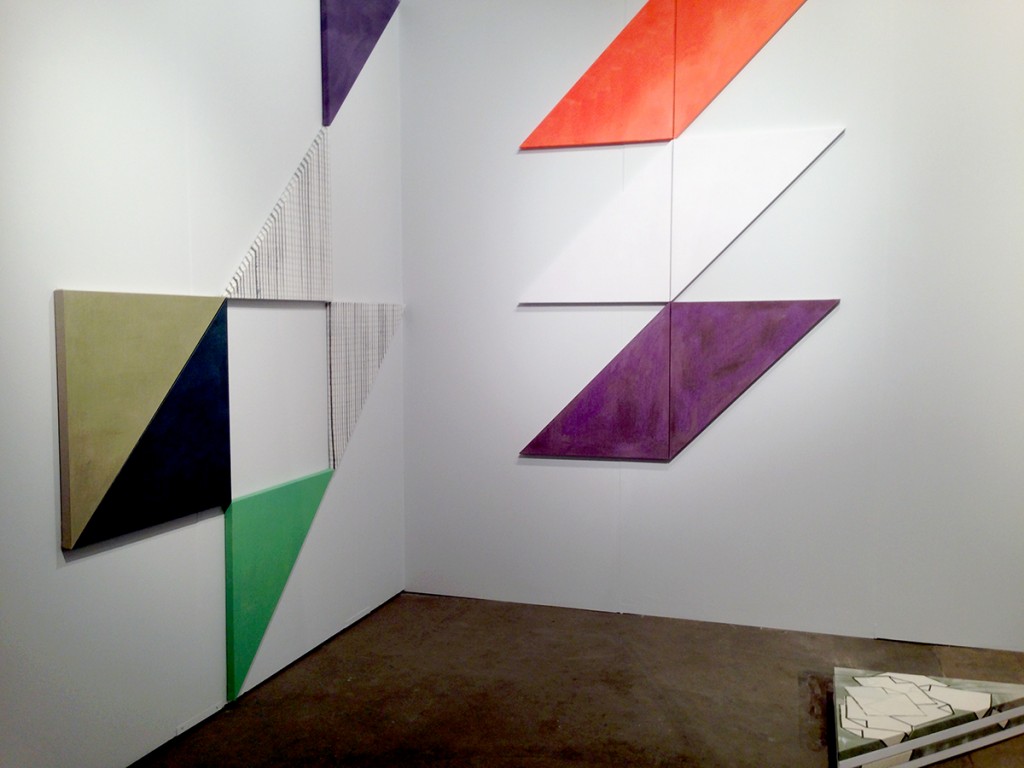 This year’s iteration of Expo is packed with reliable heavy hitters and hardly anyone who you haven’t heard of. Thankfully there are a few refreshing exceptions to this pervasive conservatism. Ana Cardoso’s installation of “Quarters” paintings in Longhouse Projects (#631) engages the whole of the booth with an ambitious presentation on the walls and floor. Cardoso’s triangular units are grouped into parallelograms, stacked and composed to make shapes out of negative space on the walls. Cardoso will be presenting a talk in Longhouse’s booth tomorrow, Saturday, September 20, at 2pm. 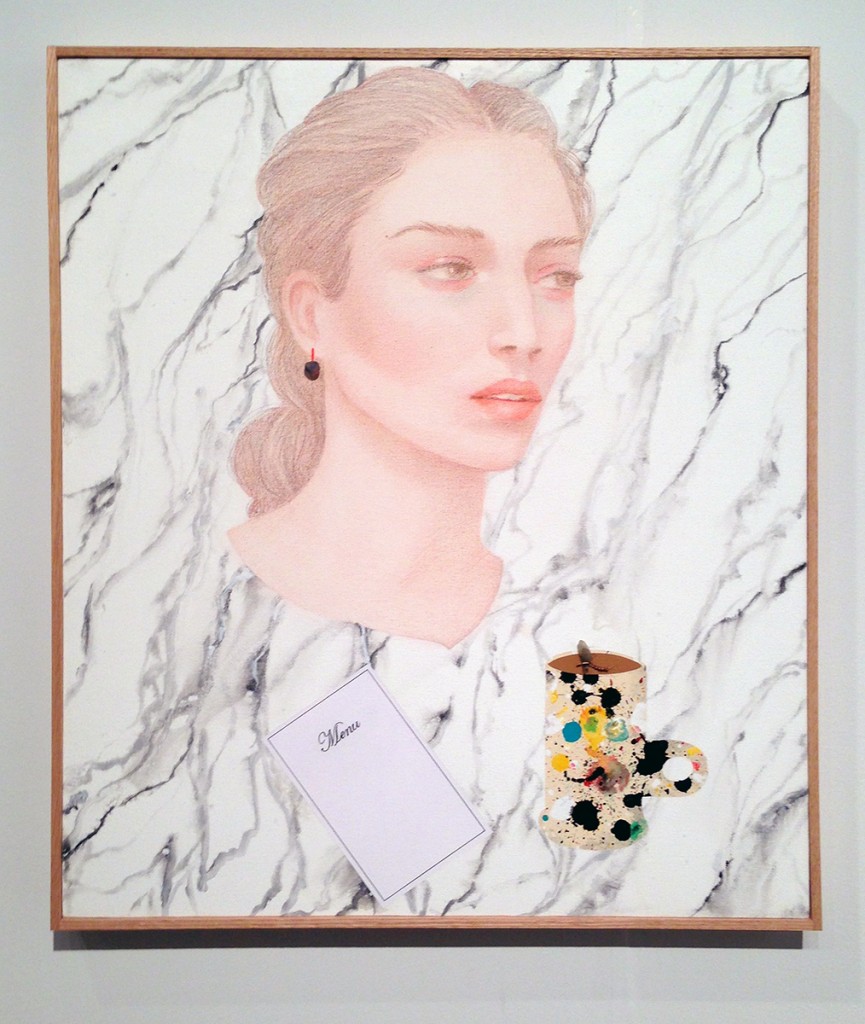 Lisa Cooley (#821) wasn’t the friendliest booth—an interesting tone to set with visitors considering the gallery has recently parted ways with several of its artists and Kelly Woods, its former director who departed in the summer to work for Marianne Boesky. Despite Cooley’s cool manner, the featured Alan Reid paintings are among the greatest pleasures on view at Expo. Fashion plates and faux finishes realized in Reid’s typically creamy alabaster shades put the décor in decorum while juxtaposing cultural signs from art, fashion, literature and advertising. 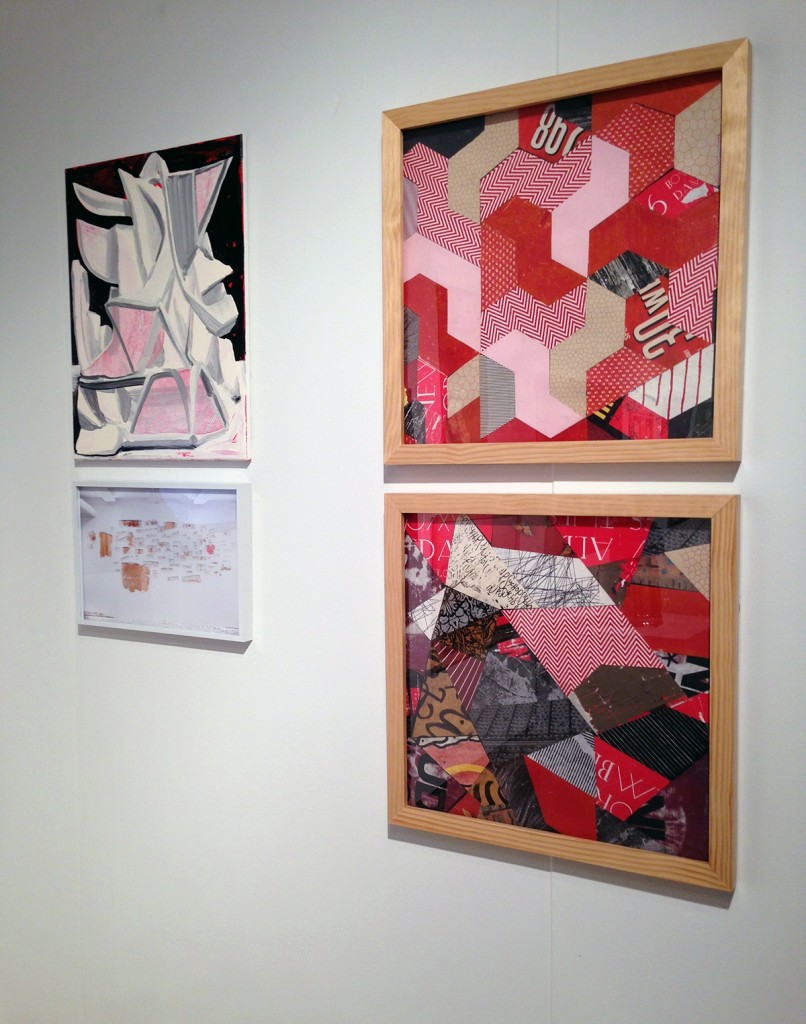 Two collages by Esau McGhee included in the Hyde Park Art Center’s booth (#814) are a prelude for his upcoming solo exhibition, “Indistinctly Anywhere,” at the Union League Club of Chicago that opens on October 2. Elsewhere in the fair, visitors can see décollage works by Jacque Villeglé in Alan Koppel’s space (#315) and Sanford Biggers in… well, everywhere; Biggers is another one of those recurring figures this year. McGhee’s “Untitled Parade” organizes Villeglé’s street detritus in patterns that recall quilts or mosaic ornamentation. The results are compelling recourses from a city dweller, attentively crafted alternative systems for ordering and navigating urban space. 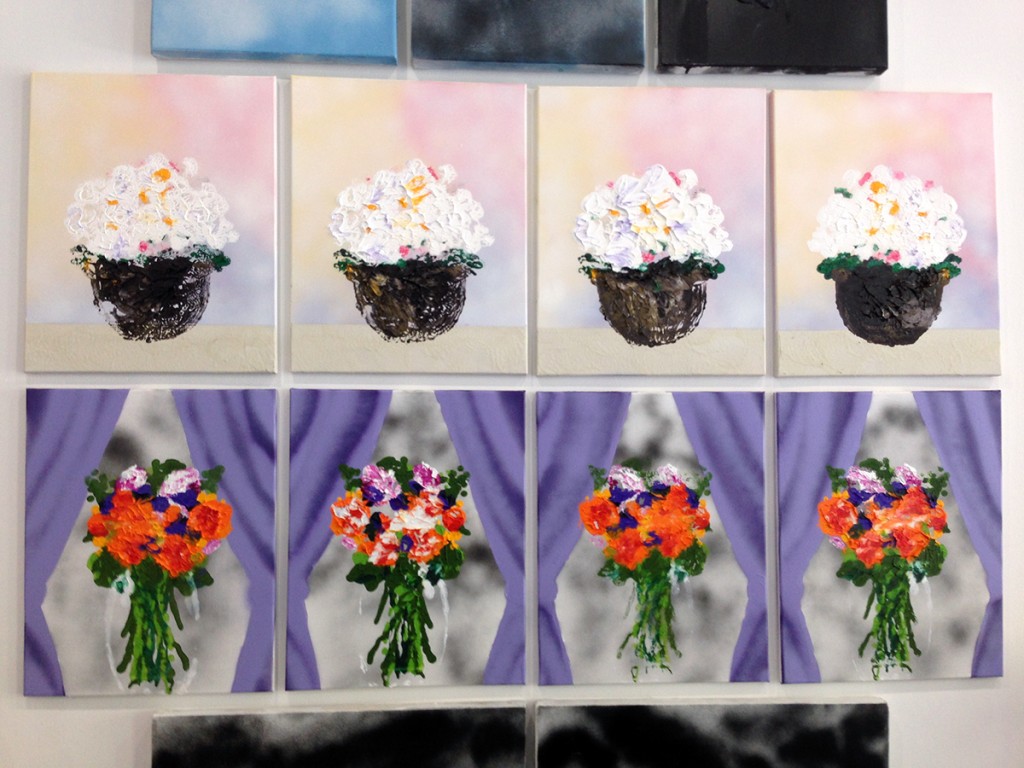 Paintings by Morgan Manduley shown by Yautepec at EDITION

Buy the Flowers Yourself at Edition

Former Chicagoan Morgan Manduley returns as the featured artist in Mexico City’s Yautepec, one of the many galleries represented at the Chicago Artists Coalition’s EDITION fair. Manduley has set up a flower shop with hand-crafted and painted floral stems ($50 apiece) as well as really great sets of paintings ($3,000 for the sets of four) that have been made by stamping one wet painting against several other canvases. Ann Craven-meets-Michael’s craft store, Manduley’s serialized-stamped bouquets slyly sit in the interstitial space between painting and editioned multiples. They’re my pick for aspiring collectors with modest budgets. 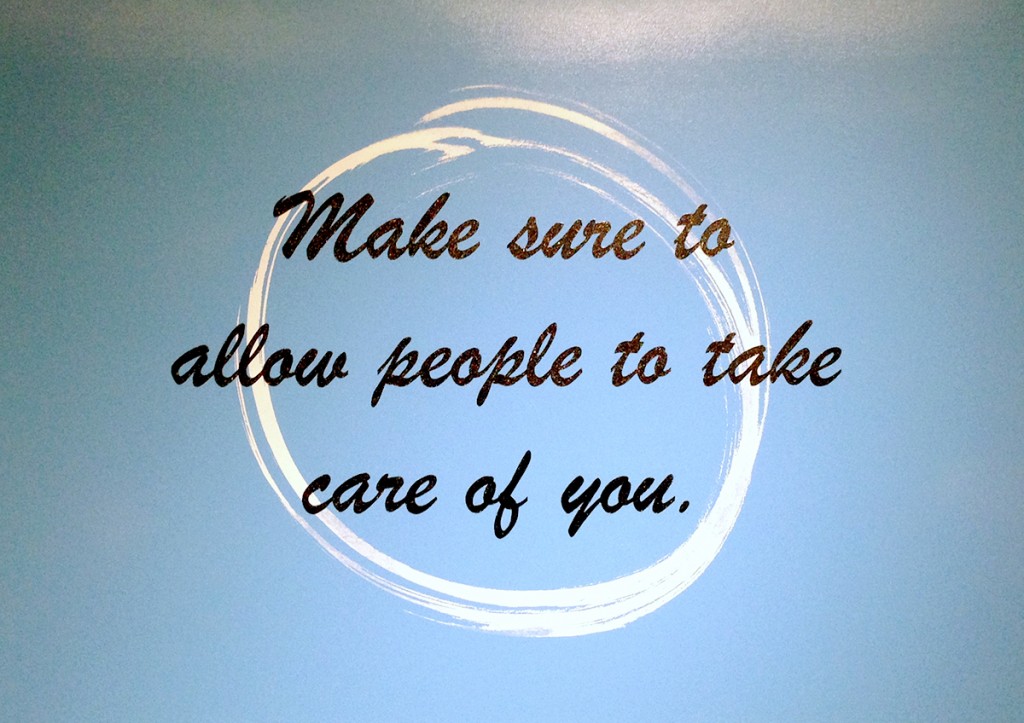 Detail of Mickalene Thomas’ “Make sure to allow people to take care of you,” 2014, acrylic on canvas

And with that, gentle readers, I’m going to sign off with advice Mickalene Thomas’ mother gave her that is immortalized on one of several large text paintings in her brand new exhibition at Kavi Gupta’s space at 835 West Washington: “Make sure to allow people to take care of you.”

We’re all in this together.
Thanks for all the champagne (and there’s been a lot already).
(Matt Morris)

1 Comment
Inline Feedbacks
View all comments
What You Should Have Noticed in September : Bad at Sports

[…] have given the show proper analysis: NewCity features wrap-ups from Alan Pocaro, Erin Toale, and Matt Morris; Robin Dluzen covered the Expo for ArtFCity; Bad at Sports’ own Dana Basset drops notes in her […]