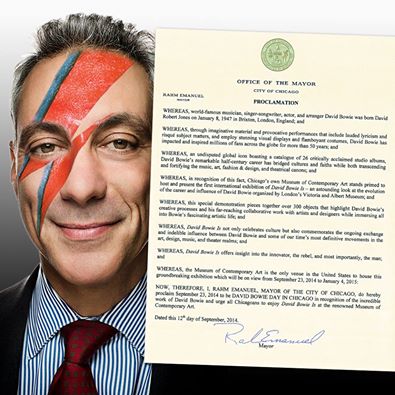 One early morning last week—as I was getting ready to go down to Navy Pier to put the finishing touches on my installation for the “Art Prom” that was at the third annual installment of Chicago’s own Expo Chicago—I woke up to a picture in my Facebook feed, of Mayor Rahm Emanuel, in full Ziggy Stardust make up.

It was accompanied by a PROCLAMATION from the Office of the Mayor/City of Chicago with lots of WHERAS’ celebrating David Bowie’s career and the MCA’s accomplishments in securing the show for its only North American venue, and ending in “NOW, THEREFORE, I, RAHM EMANUEL, MAYOR TO THE CITY OF CHICAGO, do hereby proclaim September 23, 2014 to be DAVID BOWIE DAY IN CHICAGO in recognition of the incredible work of David Bowie and urge all Chicagoans to enjoy “David Bowie Is” at the renowned Museum of Contemporary Art.”

It was a first-class prank, of the sort that we have all dreamt of pulling in childhood fantasies of “If I Ruled the World,” and yet it knocked me out, like an NFL player in an elevator.

In that moment I just could not even begin to handle my disappointment, and I couldn’t decide if I despised our mayor more as the evil vampire squid on the face of the CPS—who continues to rob the school children of Chicago (my own among them) of their right to a decent public education-—or as the smug playground bully who will sully and ridicule everything that you hold most dear. 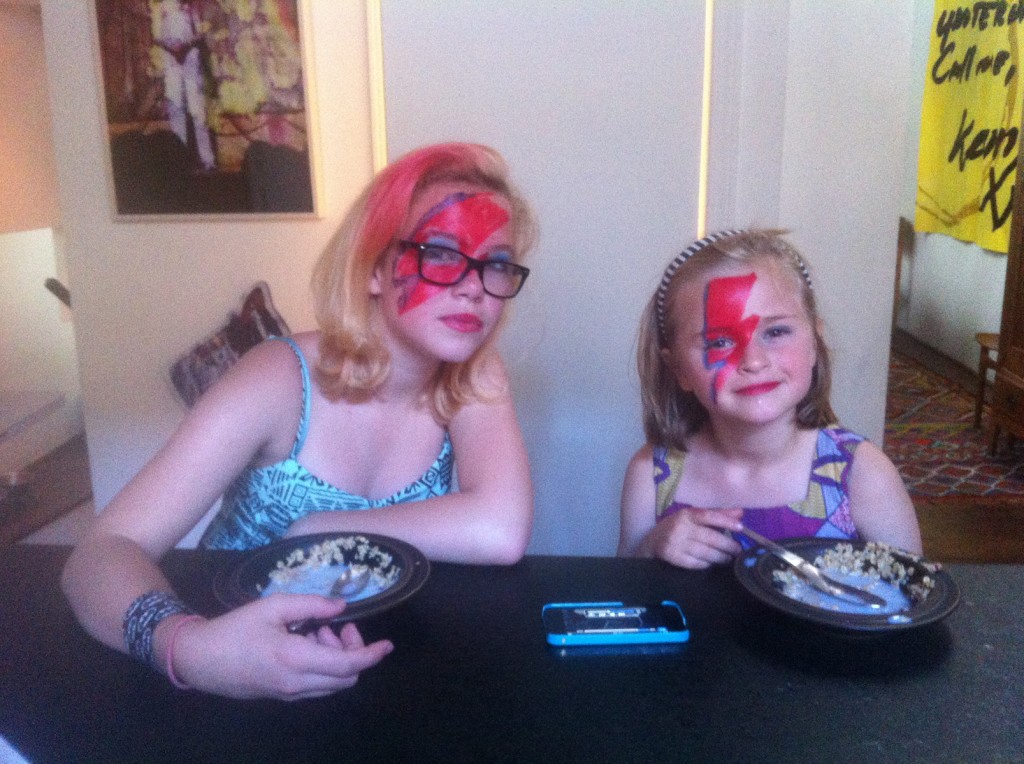 I was thrown back (it was Thursday) to my own high school days, out in the sticks of the back of beyond. I would walk to school in a pair of sweatpants I had adorned with blue sparkly Lycra to resemble (I-have-no-clue-what-they-really-resembled-but-to-me-they-resembled) Glam Rock stage attire circa 1974 and meet my best friend in the girls’ toilets, where she would cut my already hennaed hair into a classic Ziggy Stardust mullet. (We called ourselves girls back then, not yet grrrls or gurls, and we called our toilets toilets, and we did not have even the tawdriest of H&M’s in the hamlet where I grew up—so we would make do and mend with what we could find in the local high street and in the thrift stores that were our velvet gold mine.)

Why is dissonance between these two images—Rahm-as-Bowie vs. me-as-Bowie—so disturbing to me, and why does it make me feel like I can absolutely not be asked to visit an exhibition I traveled half the world to see just over a year ago when it first opened in the V&A in London? I am wearing the lightning-bolt earrings I bought in the museum shop as a relic from this pilgrimage as I write this, just to get my Bowie back.

The exhibition is gorgeous, obviously. Its treasure troves include handwritten lyrics, rare sound bites, obscure videos of early mime performances, DADA-inspired set pieces, contact sheets from promotional photo shoots and David Bowie’s own paintings from the Berlin years—among them a portrait of a sullen James Osterberg on a dreary winter’s day. And we haven’t even gotten to the costumes yet.

Yes, they are all that: dazzling, bejeweled, Spandexed, sartorial, royal, Faustian, alien, garish, modish, lavish, gaudy, showy and everything else that David Bowie was during a career that spans forty years and visits every dark corner of the rock ‘n’ roll soul. And tiny. Because—like Rahm Emanuel—David Bowie is a tiny dancer, and the clothes make the man.

The show climaxes in a theatrical concert experience—a surround-sound extravaganza of live footage—like the famed last concert of Ziggy Stardust and the Spiders from Mars from their 1973 documentary. It closes with the words: “Not only is it the last show of the tour, but it is the last show that we will ever do, thank you!” and the screams of “No!” “No!” from the crowd drowning out the opening chords of “Rock ‘N’ Roll Suicide.”

It was a real David Bowie moment for me, and I will go back, if just for that, but I’m afraid it won’t be the same after Rahm danced all over it.

It is not even that I begrudge Rahm his Bowie moment. He may very well have grown up a Bowie fan, like myself. Midway in age between me and Mr. Jones, he has the right age for it and as much right to it as anyone. It’s just that his (in my eyes) inappropriate appropriation of the Ziggy Stardust trope, takes a moniker uniting misfits of all ages from all corners of the world and turns it into a smug insider’s joke.

Or maybe it is just that we have spent the last decade romancing the working-class hero, working his way up from the bottom to the top, or from the margin to the center—and then Rahm goes and tears it all down with his private school demeanor that seems to say that you might as well take it from the top because that’s where the real power is.

In related news, Doc Martens boots are having a revival and all the high-school kids are wearing them. It doesn’t look bad—in fact it is a trend that has aged well, in contrast to a lot of the other rags that have been pulled out of the closet lately—but Americans in Doc Martens confuse me. It’s just another one of those cognitive dissonance things, I guess. Like Joy Division playing over the speakers in the LEGO store: “Love/love will keep us together/and love/love will tear us apart again.” In the LEGO store, of all places, located right next to the American Girl Doll store. Think about it. And then think about all the divorcees who bring their kids there on the weekend, to make up for lost playtime. Never thought of LEGO as a metaphor for the meltdown of the nuclear family, but there it was: Love. Love will keep us together and love. Love will tear us apart again.

But nevermind. My daughter, except for her passport, is an All American Girl, and she looks great in her Doc Martens, which she brought home from the dirty old town this summer. We will walk to school together in our matching boots (I have never not had a pair since I bought my first almost thirty years ago) singing the landlord’s song from her favorite TV comedy “The Young Ones”:

No don’t you want me

Ok boot do your stuff

[1] You can watch the video of Alexis Sayle’s memorable performance here.