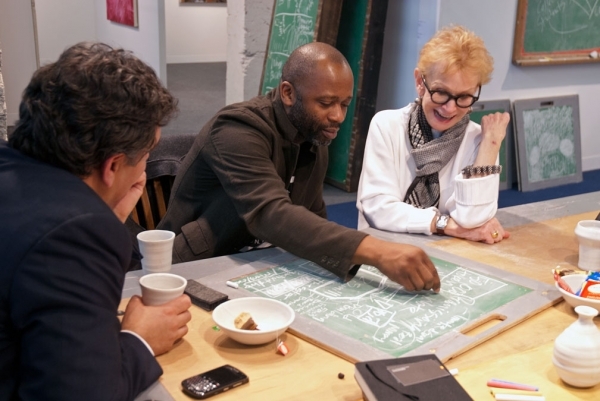 Theaster Gates, recently positioned in Newcity’s Art 50 as the #1 most influential and important artist working in Chicago today, will no longer be represented by Kavi Gupta Gallery. Gates’ website has been updated to direct inquiries about his work to White Cube in London.

In an email from Kavi Gupta, the gallerist explained the mutual decision that he and Gates arrived at: “The gallery is still working with him but on a project by project basis. We decided to change the way we work with him, as he is spending more time on his larger real-estate/public art projects and social art practice and less on art objects. His practice has become much more than something that is defined by a brick and mortar art gallery, and he has ideas that go way beyond the scope of our activity. However, because of our long relationship with him and because we introduced him to the art world, we mutually decided to focus on helping him with his future projects as they relate to art and keep loose ties going forward.”

Gates and his studio declined to comment. While concerns about privacy around business decisions could be understandable, one would wish that these moves in the artist’s practice could be explicated and used to further demystify the mechanics of the art world (and particularly the art market) in ways that Gates’ socially driven projects have done to deepen conversations around neighborhood community health, housing, racial politics and mentorship for younger artists.

There is an interesting new tempo emerging in Gates’ practice related to selective silence and facilitating strategic removes within art world economies. His special project at Expo Chicago last weekend featured work by Erika Allen and Mitchell Squire and was described in press materials as “exploring the ways in which artists of color perform an act of withdrawal to gain a position of strength and perspective when communicating through art.” Likewise, the 2014 Black Artists Retreat he organized in August wasn’t open to the press. Perhaps the decision to not offer insight into the inner workings of artist-gallerist relationships should be read as an empowering “act of withdrawal.” (Matt Morris)