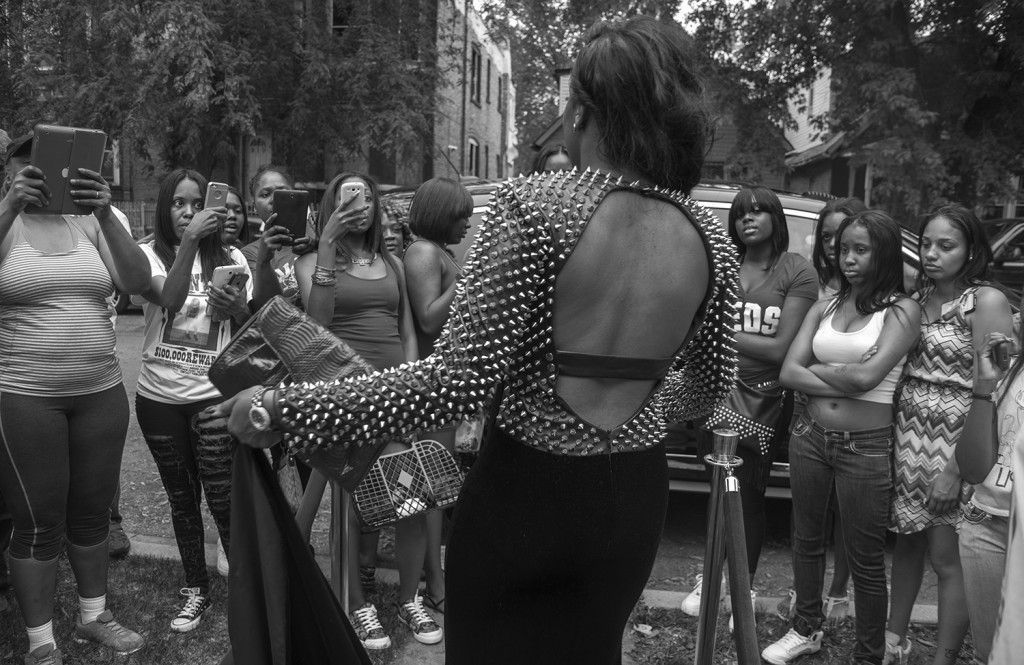 Having gained attention for her lush and exquisitely beautiful color studies of nail art, which both document the extravagant and elegant ways in which some people adorn their nails, and place those works of body art against luscious soft and liquid backgrounds, Helen Maurene Cooper now shows herself to be a versatile photographer who is at home in several diverse genres in her exhibition “Raiment in Horto.” Along with two of the nail shots, Cooper’s early survey of her artistic output offers formal color portraits of pit-bull dogs (they are quite cute), diptychs pairing murky miniature tintype portraits of drag queens (who have pulled off looking like young women) and still lifes of rough flowers in vases, and dynamic black-and-white street photos of sidewalk performances. In each body of work, the sensibility is entirely distinctive, with the nails providing the jolt of seeing something familiar in a new light and context, the pit bulls subverting their popular image, the tintypes casting a mood of antiqued melancholy, and the street shots showing—as street shots do—the quirks of urban life on the fly. The street shots steal the show and grab the eye because of their vitality and visual-social commentary. A strikingly dressed African-American woman shot from behind is displaying her fashion to a knot of teenage girls forming a semicircle around her on a sidewalk; on the left side of the performer, all the girls are holding up cameras, whereas on the right side, all the girls are looking at her judgmentally with their naked eyes. Although Cooper’s photography does not have a common sensibility, mood or meaning, it does always have a duality built into it that enlivens it even when its subject is still and immobile. The street shots open the way to grasp that double-play in the other series. (Michael Weinstein)