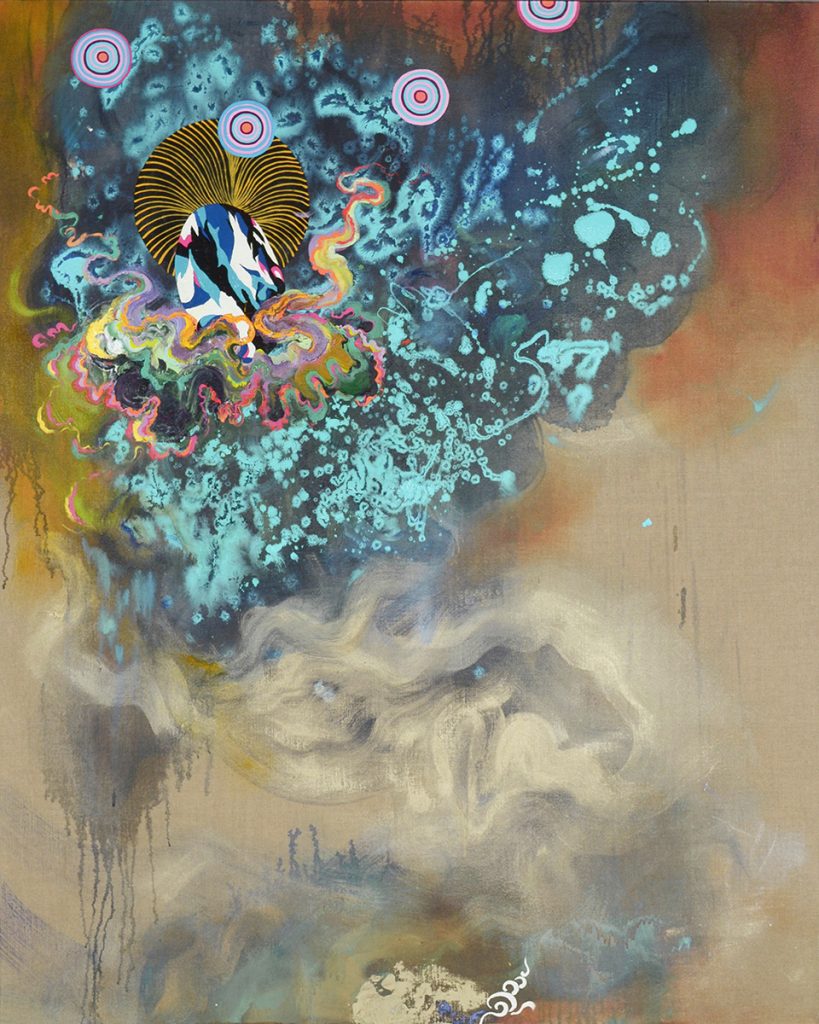 Jackie Tileston’s new paintings in “Field Guide to Elsewhere” look as if they are running along the walls of Zg Gallery. Canvas to canvas, she achieves motion with her use and command of several types of media including enamel, oil, Conté crayons, spray paint and dry pigment. In addition to the colorful, pyrotechnic landscapes that result from these materials and her studied use of them, the negative space further contributes to their kinetic feel. The landscapes are expanding and changing and these blank areas of the canvas, left only with residual washes of paint, furthers a sense of speedy movement and flight from a point of origin.

“Recollection Station” is regal in Tileston’s creation of a kaleidoscopic quality as smoky plumes rise, creating whimsical landscapes. The abstract form closely resembles a genie escaping from a bottle while bulls-eyed mandalas float above it. Airy blue ether spreads to conjure fluorescent tentacle-shaped forms that swirl around the black, blue, white and pink haloed shape, further adding to the infectious momentum that fills the linen canvas. This painting is central to the idea of conceptual field guides leading to a fantastical elsewhere while stationed within the space of her canvas.

Tileston’s fascination and immense knowledge of heterotopic notions is a common thread in her work. In her artist statement, she says she works to “create paintings in which several different locations or spaces are made to coexist within one space.” A cacophony of physical commotion collides with a spiritual energy as an orderly chaos; the background is serene while the action is loud and hyper. She has lived in the East and the West and the commingling and merging of culture and thought fascinates her. In “Panharmonicon,” the thickly-painted bulbous form of fiery oranges and reds bleeds into the faint pastels while meticulously painted black-and-white shapes birth small explosions similar to fireworks, showing an order within a chaos.

As a whole this exhibition invigorates and energizes in its constant motion that exudes from each piece. Tileston is in tune with the juxtapositions and the synergy existing in the world and she plays so successfully with these concepts in her work. Although these are abstract paintings, she carefully considers every stroke and decision of material used, leaving a viewer with a wondrous payoff in these engrossing works. (Carrie McGath)