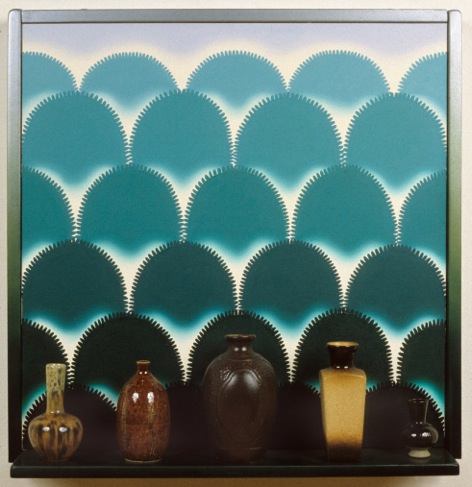 The eleven examples at Russell Bowman Art Advisory of Chicago artist Roger Brown’s Virtual Still Life series, created before his death in 1997, consist of patterned oil landscapes with attached ledges that mostly hold a myriad of found ceramic containers. As an avid accumulator of artful tchotchkes, Brown was certainly no stranger to placing objects on shelves and these last works gather up parts of his collection to dwell with his paintings in the fine art world. Though Brown’s estate ultimately ended up safe in the hands of caring institutions, it is touching to see these hand-picked artifacts saved by their incorporation into paintings. Like heirlooms conferred to deserving children these objects were promised a continued life of appreciation beyond the loving eyes of their vanished curator. 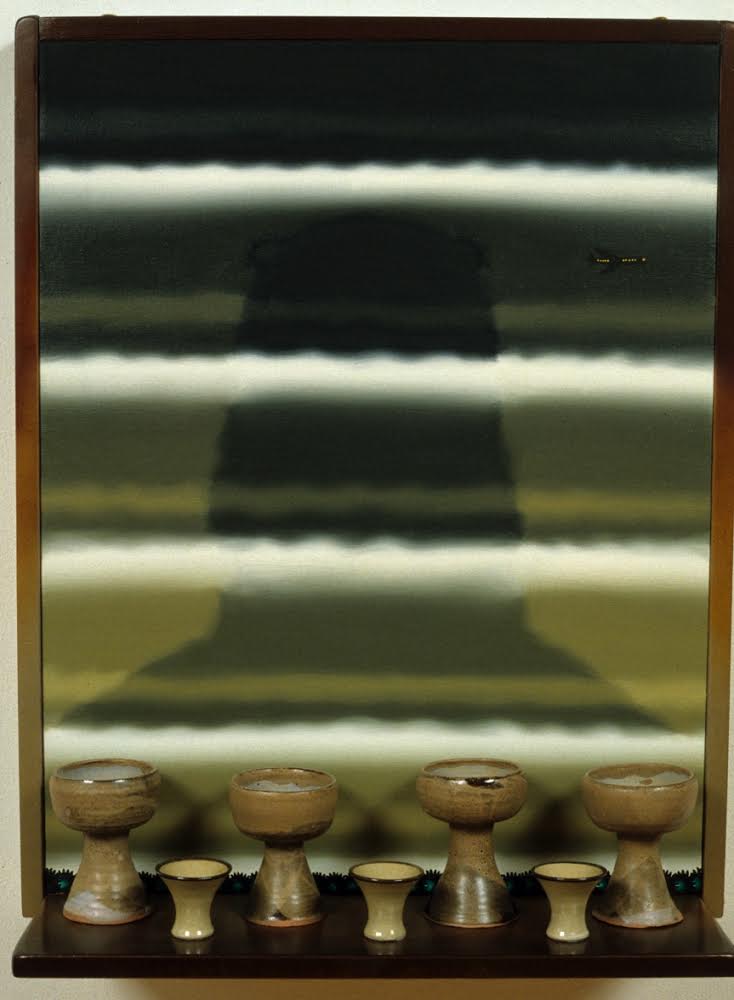 The combinations, including a crowd of husky pots arrayed like the hills behind them in “VSL #14: Pots and Piedmont at Piru,” three shell plates that perfectly match the clouds in “VSL #23: Midnight Ride of Paul Revere,” and a kitschy basket in the dryly titled “VSL #26: Bread Basket with Dust Bowl,” reinforce Brown’s theory of objects finding each other. The paintings, with their carefully blended fish-scale patterns and hazy horizontal gradients serving alternately for air and land, are intertwined irrevocably with their items. Often corresponding in shape or sheen, the relics can also serve in contrast as in the case of the single pointed decanter in “VSL #6: Return to Russia” pointing up like an onion dome of the Kremlin to pierce the oppressive black thunderhead above.

The ominous “VSL #16: Saki Cups and Four Big Sur Communion Chalices with Oral Roberts’ Vision of a Two Mile High Jesus” presents the televangelist’s fantasy as a topographical monument. A silhouetted Christ looms into obscurity through accumulating fog, becoming cartoonish as he rises past a miniature airplane over the set of austere vessels. Despite his making fun, Brown kept this ludicrously American vision around for the same reason he kept the above-mentioned basket. However rough-hewn, these objects and visions were nonetheless designed with care by somebody and thus an integral part of the landscape. (Nick Knowlton)