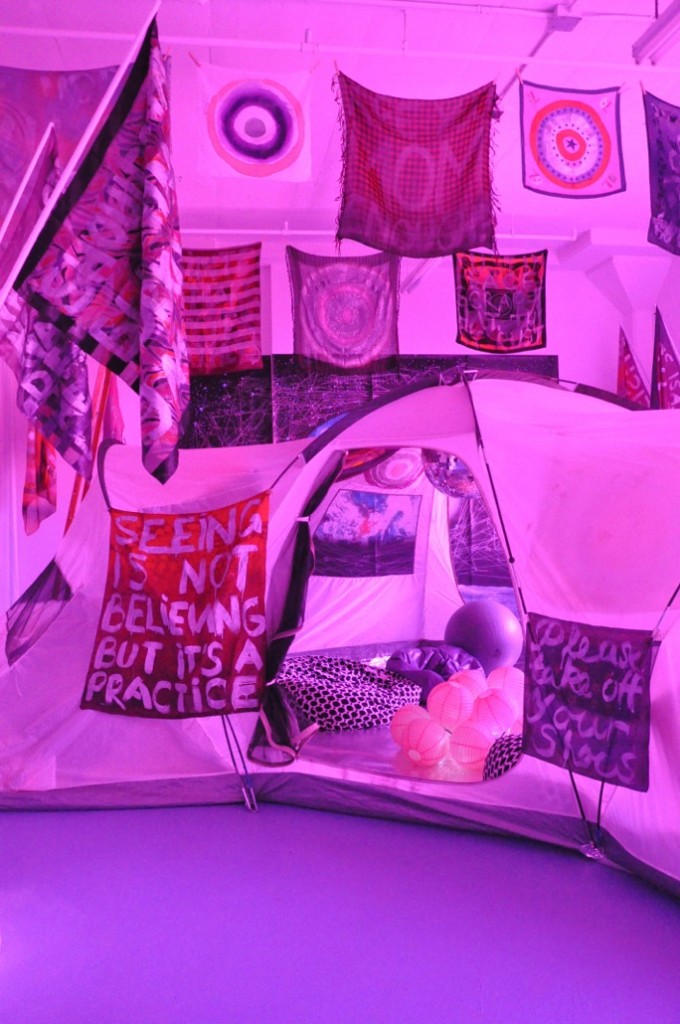 I’m the sort of queer person who hangs out in places where you hear the word “breeder” tossed around; this isn’t really a unifying trait of these places, actually, because I’m often the one saying it. I’m dubious about moves to increase visibility for the material conditions of parents and families. I usually remain unconvinced that these agendas to further elucidate the particulars of family life can resist being co-opted by a forceful patriarchy that rigidly orders gender roles to align with the reproductive determinations of our bodies. It’s a particularly fraught conversation within the art world at least in part because advancements to naturalize current norms threatens cultural producers who aim to innovate and imagine more possibilities for how to live than we’ve previously been offered.

Into the midst of these chilly philosophical divides, artist and writer Lise Haller Baggesen strikes with “Mothernism”—a project comprised of both her traveling multimedia tent installation and a new book released this fall from Green Lantern Press and Poor Farm Press. With the excesses (and excessive generosity) of Baggesen’s artwork and book, she loosens the divide that would place motherhood at odds with a pursuit of rebelling against status quo oppression. As she writes in the book’s chapter “Mother of Demolition”: “Beginning with the old feminist premise of the female as ‘the second sex,’ and lesbianism as a third, I suggest that motherhood is a fourth… and hell, who knows? Maybe menopause is a fifth and so on… Because if we can accept motherhood as one sex among many, we can perhaps relieve the inevitable burden of motherhood perceived as a stagnant destination.” 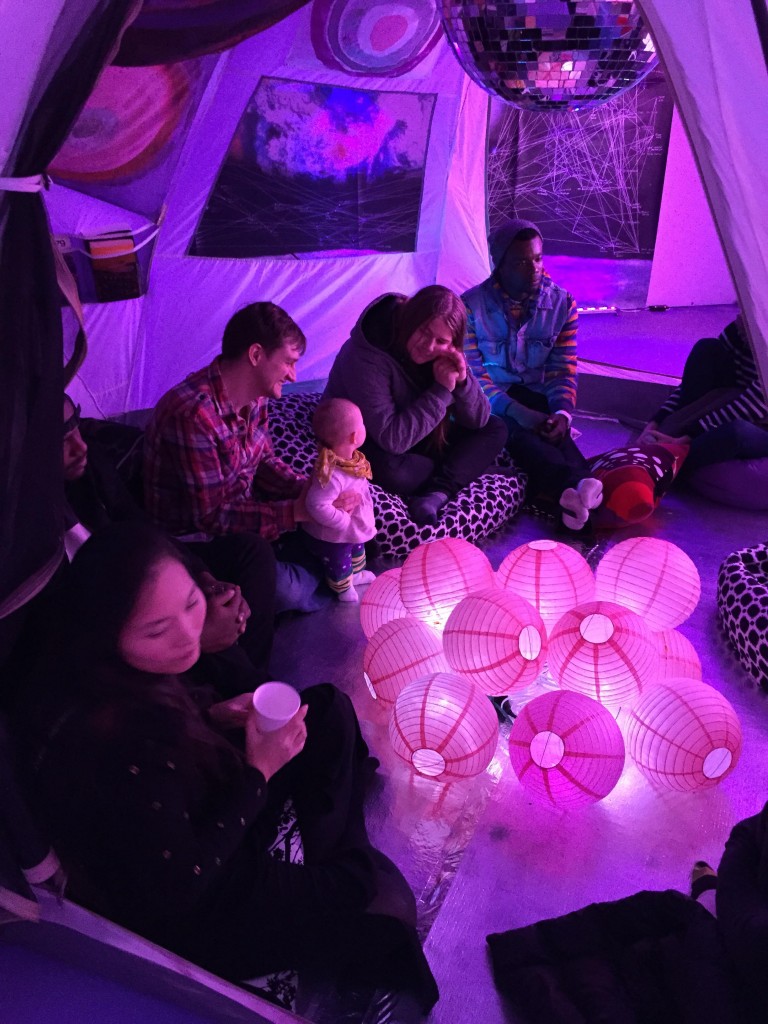 Lise Haller Baggesen. “Mothernism,” 2013-14,
mixed-media audio installation,
during one of the artist’s readings at Ordinary Projects

“Mothernism” the book cuts across a century of art history, politics and feminist theory in a series of epistolary chapters addressed to a daughter, a sister, a mother and the reader. The voice (not precisely Baggesen’s own, but rather filtered through a loose alter persona Queen Leeba who she has described as “Donna Summer combined with this proto-feminist, Scandinavian love goddess”) is at once informally tender and rigorously intellectual. The letters are what Baggesen calls a “compost” rather than a canon of artists, singers, theorists and politicians, with more than a few “bad girls” like Madonna, Tracey Emin and Jeff Koons’ ex-wife Cicciolina (who went on to serve in Italian parliament). They are joined in Baggesen’s analytical treatments with artists like Niki de Saint Phalle, Louise Bourgeois and Hilma af Klint; psychoanalytic Melanie Klein, Julia Kristeva and Hélène Cixous; and many other loci ending with a take on Margaret Thatcher’s violently conservative reign. Whereas something like Judy Chicago’s “Dinner Party” portrays women’s history as a formal sit-down, Baggesen’s writing and art installations are more like chill-out lounges in which pop culture, academia, art and family can mingle open-endedly. Her fizzy and provocative text culminates on the last page with a comparison of feminism to the “cake left out in the rain” for which we’ll “never find that recipe again” sung about in Jimmy Webb’s “MacArthur Park.” So a new recipe for a more curious, passionate and mother-inclusive feminism and feminist art must be devised.

The chapters “Mother of Reparation” and “Mother of Pearl” are respectively intense readings of rape culture and the tricky biopolitics around ultrasound imaging. Both trace the disturbing ways that medicine and specialized knowledge are entangled with moral debates, legislation around the ownership of bodies, and most of all the insidious ways that capitalism renders even the unborn as “a possible future patient,” a source of additional revenue for an ethically compromised medical complex. Included in a book concerned largely with artistic production, Baggesen deftly points to the responsibility of artists, of image makers, to interrogate and expand on how bodies (and by extension, states of being) are being encoded and interpreted in these messy corners of contemporary life. 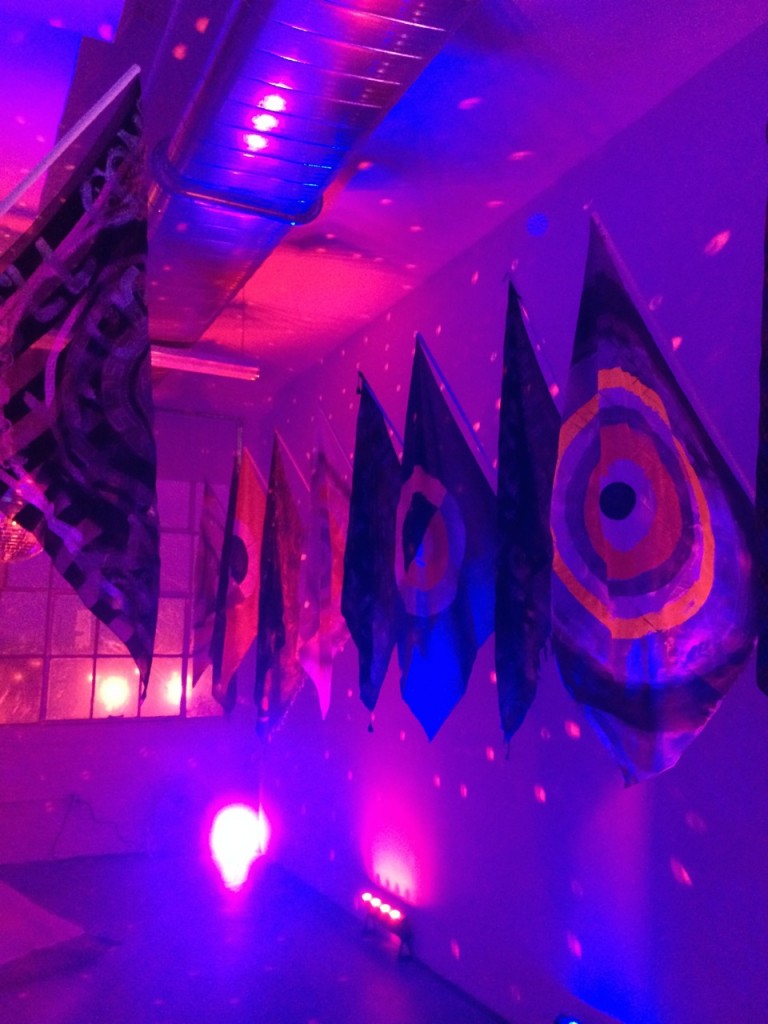 Accompanying her book’s release, Baggesen has an installation version of “Mothernism” currently on view at Ordinary Projects in Mana Contemporary. Pink-violet gels cover a wall of windows casting a rose colored glow over disco balls, playful protest banners painted on silk scarves, and the centerpiece of Baggesen’s roving, ongoing art project: a womb-like, mothership tent decked out with bean bags, pillows and mattresses, paintings, books, lanterns and audio recordings of the book’s chapters. I spent an afternoon hanging out in the tent with the artist (the first time I’ve conducted a formal interview laying on my belly across a few pillows) while we talked about aesthetics, activism and art’s future potential. She explained how the project resulted from her time doing her masters in visual and critical studies at SAIC, “Rather than only write a thesis about motherhood and art, I wanted to make a piece that worked something like a momma. You can sit in here and read the books or listen to the audio or have a conversation like we’re having. In my fantasy, we’d have mother groups coming in and breastfeeding their babies. It could be both a restorative space and also a space you could move through. All the things in the whole installation relate to moments in the text as well. You could read the installation as footnotes to the book, but you can also read the book as the wall text for the installation.”

Mothernism is on view through November 2 at Ordinary Projects, 2233 South Throop. Hours on October 16 from 5pm-10pm, and Sundays, October 19, October 26 and November 2 from 2pm-5pm.