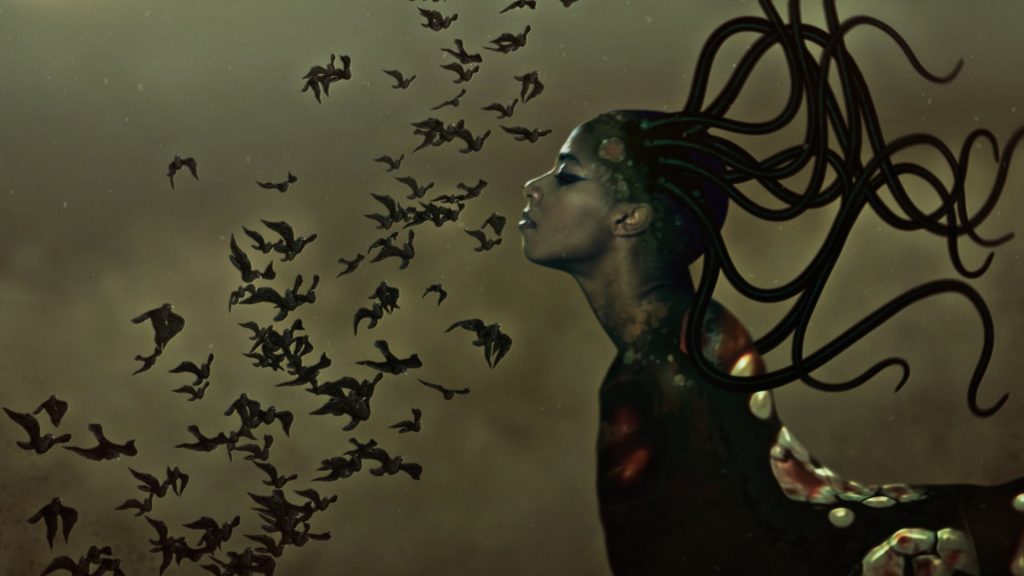 Images are ideological constructions that serve the social function of representing political and global interactions. For Wangechi Mutu’s collages in her survey “A Fantastic Journey” the artist sources imagery from National Geographic, pornographic and fashion magazines to undercut disparaging assumptions about the black female body. “Le Noble Savage” is a wry collage that demonstrates the historic weight of this misnomer. It was a term coined in the seventeenth century that designated non-Europeans as primitive and served as a reason to discredit their accomplishments. A female figure marked with dark sores wears a raffia-patterned skirt reminiscent of traditional Kuba textile from the Democratic Republic of the Congo. Mutu’s Afrofuturist aesthetic is evident in the figure’s skin. Her diseased flesh refers to the victims of crises in Africa, the interpolating global politics of war, the illegal trades of bodies, minerals, bullets and more recently the Ebola epidemic—one that the Western press ignored until two American missionaries were infected with the virus. The figure reaches up to the sky holding high a fern populated by many birds showing that there is more to Africa than just the pervasive reductive binary of casting it as a “dark” continent or the emblem of the “cradle of civilization.” 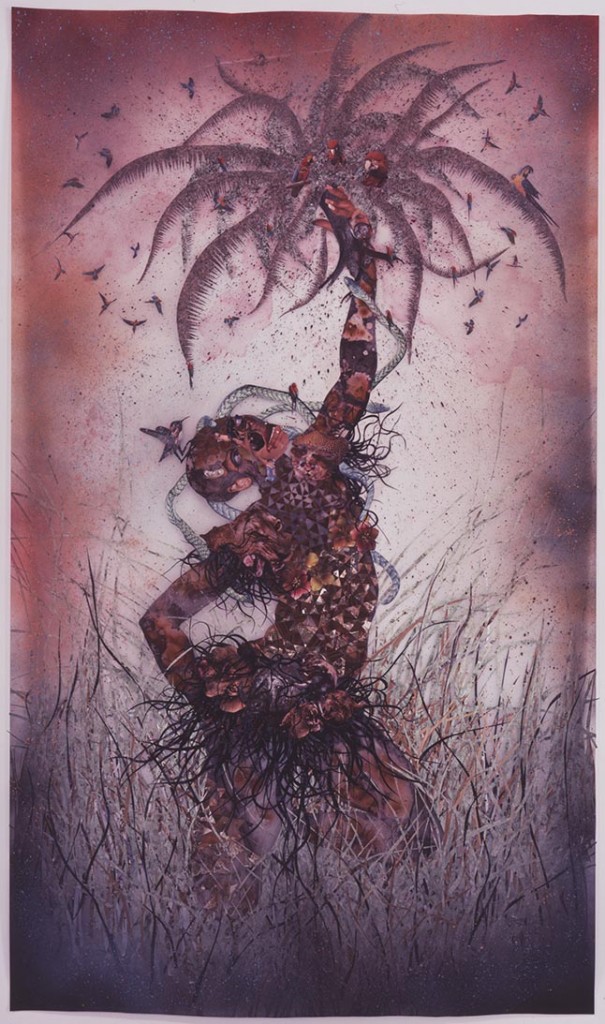 The installation “Suspended Playtime” transforms the white-cube gallery space into an austere recycled forest where the trees are made of felt blankets similar to ones used by humanitarian aid workers. Scrunched plastic wrapped with golden twine hangs from the ceiling and mimics soccer balls made by children in places where resources are scarce. Survival and quotidian activities—such as playing games—shows that people manage to be creative in dire circumstances hinting at a value often untouched by crisis reports: hope.

Accompanying her expansive collages is Mutu’s video collaboration with the musician Santigold, “The End of eating Everything.” Santigold’s part-organic and mechanical behemoth head and whale-like body violently eats birds until it combusts, birthing hundreds of sperm-like creatures that similarly bear her face in profile, bobbing about in a cloudy atmosphere. Mutu has said that women’s bodies are extremely vulnerable and marked by the circumstances of crises and war, an apt description of this computer-generated animation of a violent machine with the directive of consumption that cannot sustain itself and must be reborn. “A Fantastic Journey” removes the glossy images from periodicals into an otherworldly, hybrid realm deconstructing the system of ideals that lazily cycles stereotypes. (Hiba Ali)

Through December 7 at the Block Museum of Art, 40 Arts Circle Drive, Evanston.