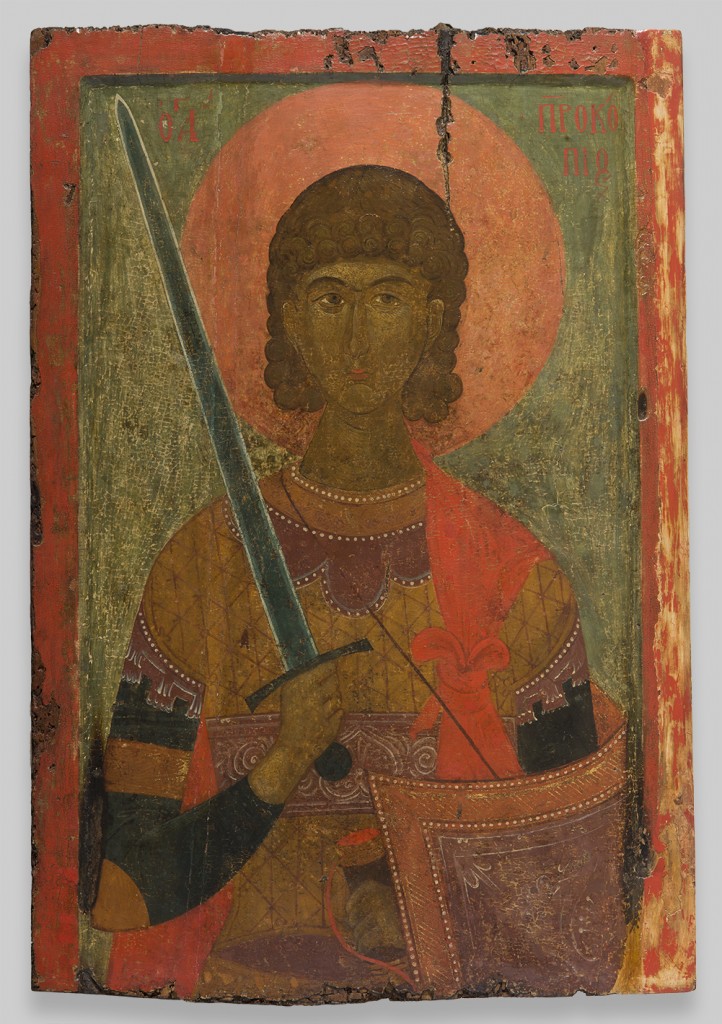 The story of Renaissance painting begins with innovations in naturalism that were a welcome liberation from the schematic strictures of the Byzantine style. Or at least, that’s how the leading art historians of the last century, like Ernst Gombrich, told it. Perhaps that’s why this is the first special exhibition devoted exclusively to Byzantine art at the Art Institute of Chicago in 124 years. But as this exhibition proves, the best Byzantine figurative art in painting, sculpture and mosaic was no less fresh, expressive and exciting than subsequent art periods are known to be.

The back-to-back icons of “Man of Sorrows” with “Virgin Hodegetria” are breathtaking in power and simplicity. They don’t just symbolize a liturgy—they bring it to life through personal, face-to-face interaction. Less personal, but more magnificent is a monumental mosaic depicting Saint Andrew. The church wall where it was once embedded is long gone, but it’s glittering surface and overall design is just as vibrant as the day it was made. There’s no mosaic like it this side of Italy, and for those familiar with Ravenna’s famous depiction of the Byzantine royal couple, this exhibit has exactly the kind of big-rock necklace the notorious hooker/empress Theodora was shown wearing. The exhibit covers a broad spectrum of visual culture including jewelry, glass, illustrated books and tapestry, as well as painting and sculpture. There’s a sixth-century marble bust in the great tradition of Roman portrait sculpture—but also with that distinctly Byzantine emphasis on the staring, purpose filled eyes that will eventually find its way into Romanesque and Gothic heads. Just as distinct, but closer to the marketplace than the palace, are the lively figures painted on simple ceramic bowls. The exuberant dancer and hunting cheetah would stand out in any collection of folk or decorative art.

Obviously the Hellenic Ministry of Culture had the opportunity to pick the very best examples of whatever Byzantine art could be found in Greek museums. Which makes this a wonderful show—but also makes its diminished size even more disappointing. The Art Institute only found room to display sixty-three of the 170 masterpieces shown at the Getty and the National Gallery. Couldn’t “the world’s best museum” have done better? (Chris Miller)

Through February 15 at the Art Institute of Chicago, 111 South Michigan.

[…] the Icons before they are gone.  The exhibit runs through February 15.  Additional reviews are here, here and […]