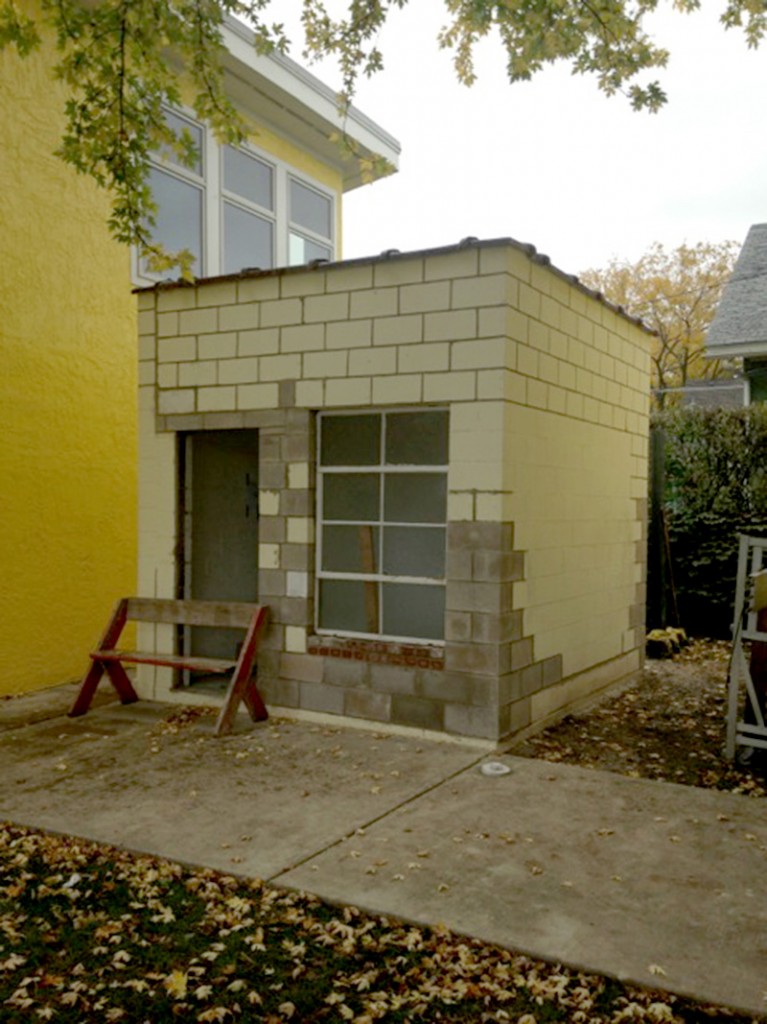 The newly mended structure of the Suburban in Oak Park

Over the past two weeks, Michelle Grabner has been sending me image updates on the reconstruction taking place on the small freestanding building that serves as one of the two gallery spaces for the Suburban, the prominent humble-but-mighty exhibition space she operates in her backyard with her husband and collaborator, the painter Brad Killam. I’ve received word that the building has been refurbished just in time to resume being used in presenting artwork this weekend. On Sunday, November 2, they will open exhibitions of work by Alan Belcher and Joel Otterson with a reception from 2pm-4pm. The Green Gallery Oak Park, a third small room in the architectural cluster in which the smartly curated Milwaukee space presents artist projects, will open an exhibition with Jennifer Bolande. These exhibitions will remain on display through December 12, viewable by appointment after the opening. 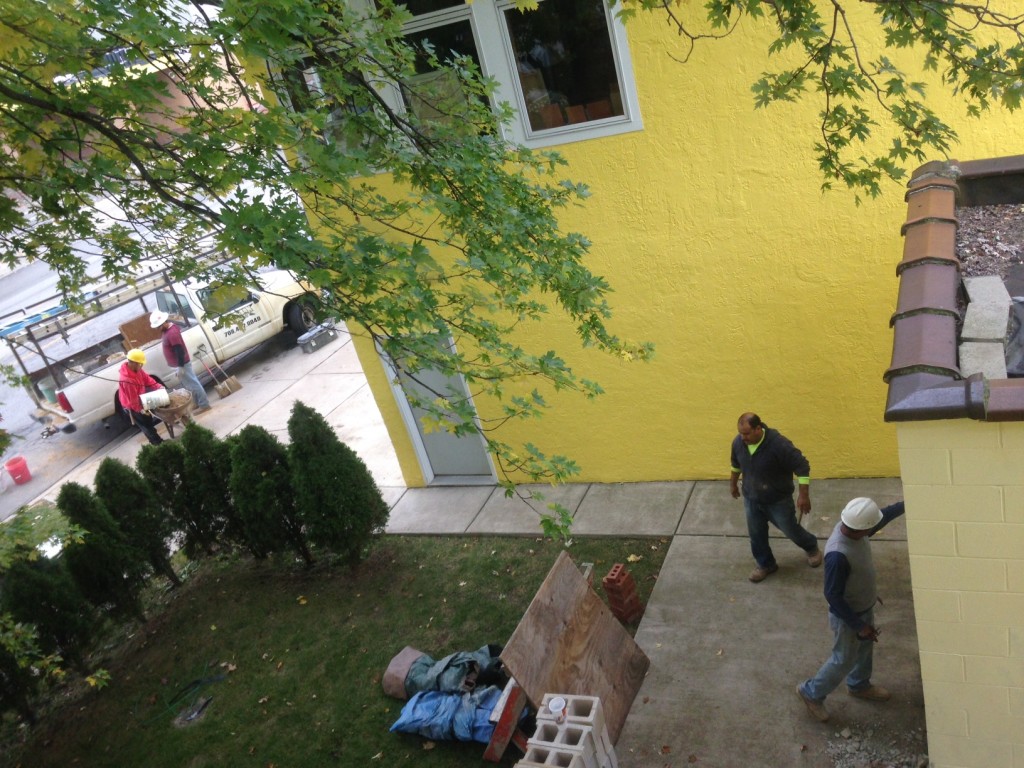 Contractors beginning work on the Suburban’s repairs on October 13

The Suburban’s iconic structure was damaged just about a year ago when, on November 17, Dana DeGiulio backed a 1996 Buick LeSabre sedan into the building for her project at the gallery. The car was purchased with the profit DeGiulio made off of selling a Michelle Grabner painting she’d been given as a gift; along with running the Suburban with her husband, Grabner is also one of DeGiulio’s mentors. At the time, it was thought that the whole of it would need to be torn down, but on October 13, 2014, contractors began a successful patch job to which Grabner exclaimed, “I think it is better than before.” 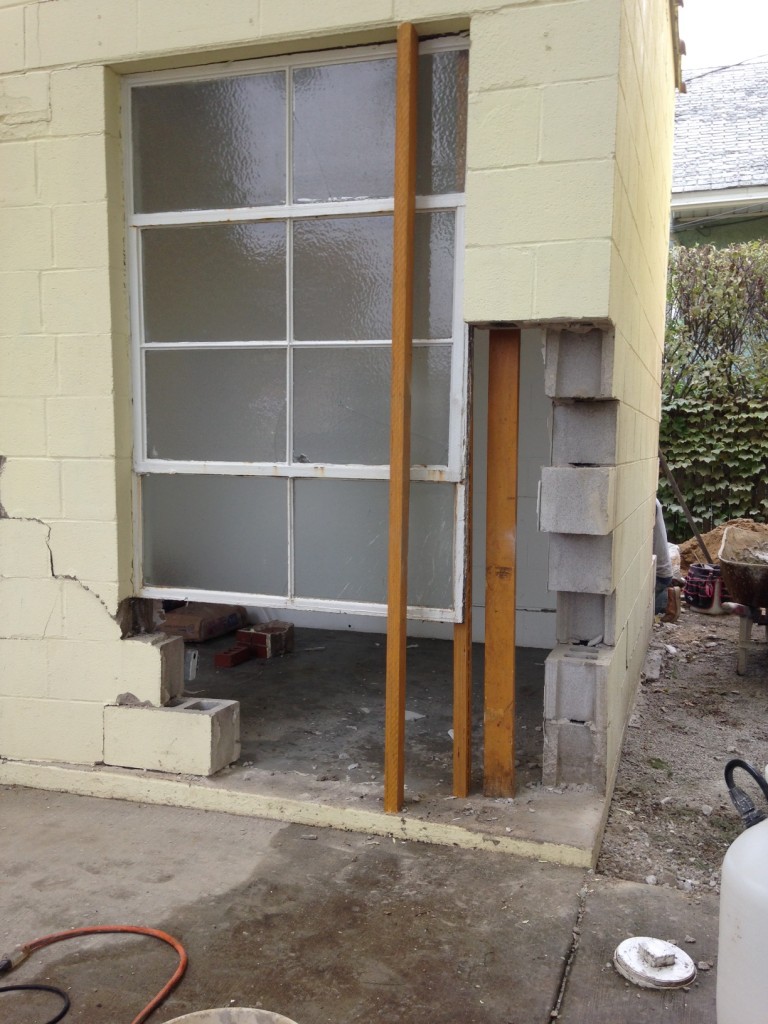 In an essay Lane Relyea published in 2008 to accompany a traveling survey of Grabner’s work, he wrote about the facsimile of the Suburban’s little building that was constructed inside the larger exhibition space: “The meaning gained from recreating the actual cinderblock structure owes not to some act of reification, an exploiting of the gallery’s ability to serve as a free-floating sign of itself, but rather the opposite; the purpose is to ground The Suburban and its function in a specific context, a concrete syntagm of sites and activities whose interaction is responsible for whatever meaning the modest building has in the first place.” 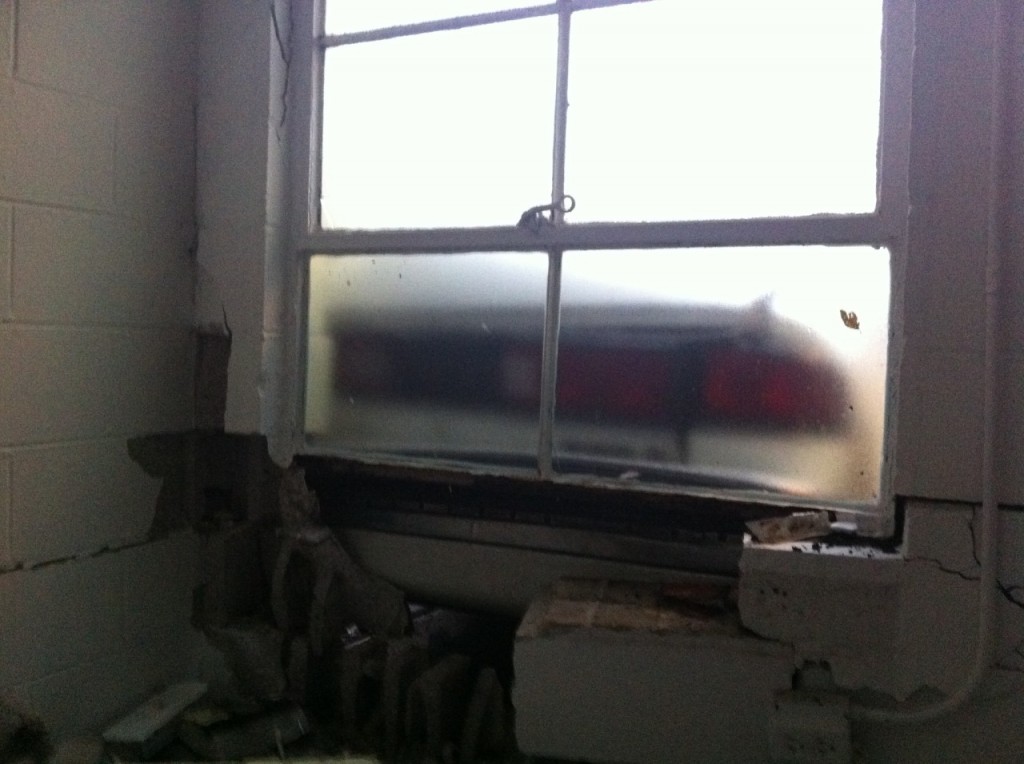 The resultant wreckage from Dana DeGiulio’s intervention last fall. Photo by the artist.

Directly following DeGiulio’s destructive blow, Killam and Grabner entertained a number of possible futures for this now fifteen-year-old endeavor, including a total rebuild or the possibility of taking this site out of play from their promotion of other artists doing compelling work. But as Relyea writes about the exhibition copy of the building, the image of this particular building supports the specific aspects of the gallery’s ongoing activities. It’s common sense consistent with the Suburban’s ethos to rebuild and reset, to continue forward for a while longer. (Matt Morris)