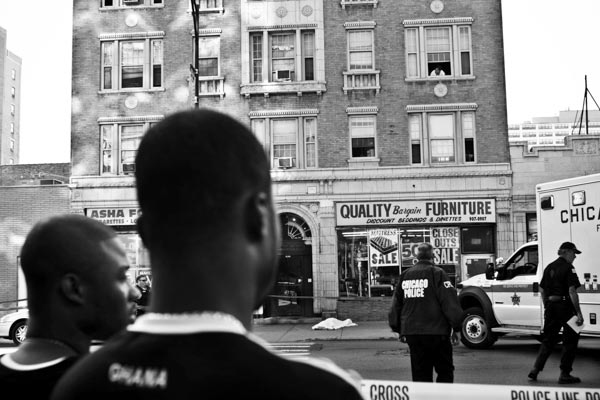 The real protagonists of Carlos Javier Ortiz’s black-and-white photo-documentary of the impact of gun violence in American cities today are the neighborhoods where it happens and is felt most directly. “We All We Got” is comprised of images of funerals, vigils, grieving families, commemorative artifacts, detention lock-ups, crime scenes and much more to create a comprehensive visual grasp of the phenomenon; but the places themselves and the sense of the stark realism of everyday life there overtake all the details.

Shooting in Chicago and Philadelphia from 2006 to 2013, and persistently revisiting the same neighborhoods, Ortiz has succeeded in evoking a sense of place that will be familiar to anyone who has passed through marginal areas of the city and has realized that everyday life goes on there, but is more oppressive than it is elsewhere. In a particularly powerful image, Ortiz takes us to Chicago’s Uptown where two young African-American men, photographed from behind, dominate the bottom left foreground as they watch police officers “processing” the dead body of the victim of a drive-by shooting. The officers are framed by the youths, barrier tape, an apartment building and a squadrol blocking the street at the far right, creating the stage for the drama of which the youths bear witness. The image is elegantly composed, crystallizing the scene and setting up a triangular relation between the representatives of public order, the corpse covered with a white sheet, and the two onlookers from the community. There is nothing sensationalist or sentimental here; we are seeing a routine that has been enacted many times. We have no idea what the youths are thinking; we can assume the police are just doing their jobs. It is the normalization of gun violence that Ortiz communicates, another aspect of life in the neighborhoods where it happens more often than in others—and that is the most devastating commentary one can make. (Michael Weinstein)