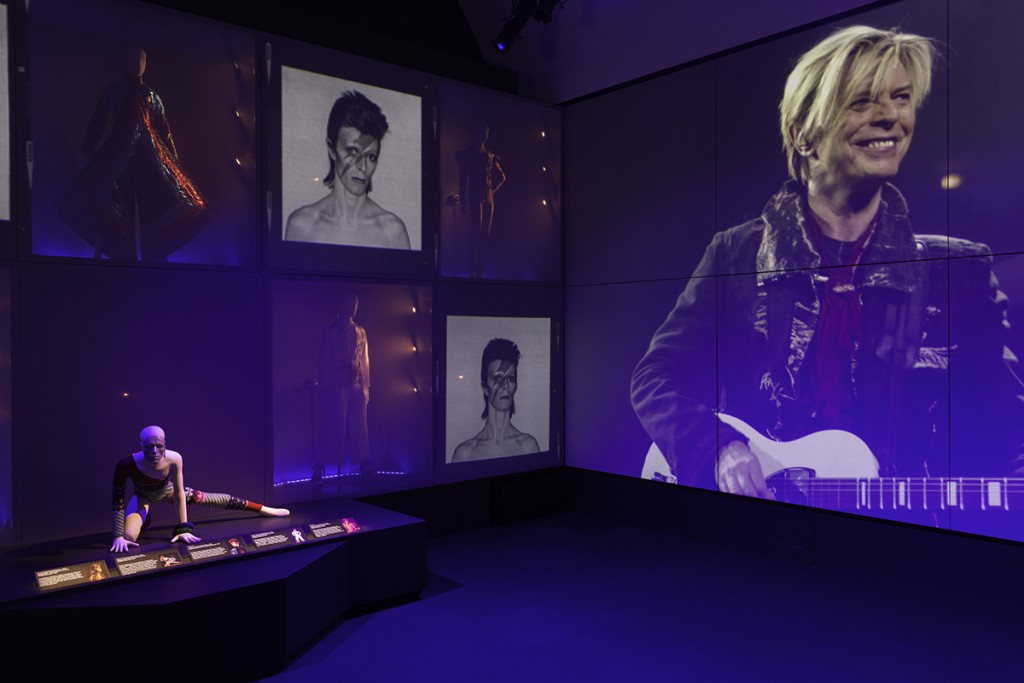 Bowiephiles rejoice: no expense was spared on the Museum of Contemporary Art’s iteration of this appropriately elaborate touring spectacle—a multi-chambered rumination on the many-petaled-flower of the living icon’s magnificence. This pageantry, situated on the virtually unrecognizable fourth floor of the MCA, includes memorabilia, archival materials, breathtaking costumes and some of Bowie’s own “art.” Evidence of the takeover exists throughout the building; nowhere can you escape the waft of his anthems, and even the security guards have been adorned with Bowie shirts. To co-opt the semantic organizational structure of the show, Bowie is… pervasive.

Chicago is the only U.S. destination for the show, which was organized by the Victoria and Albert Museum (V&A), London. Bowie and his camp granted archive access to the curators, aided with fact-checking, and monitor the condition of objects but otherwise have been very hands-off, says MCA James W. Alsdorf Chief Curator, Michael Darling, who oversaw the Chicago installation. The exhibit feels very V&A-meets-MTV, replete with a show-stopping, toe-tapping grand-finale. There are moments when the voices of the MCA and Darling ring clear; the show succeeds in these quieter, more contemplative tableaus. 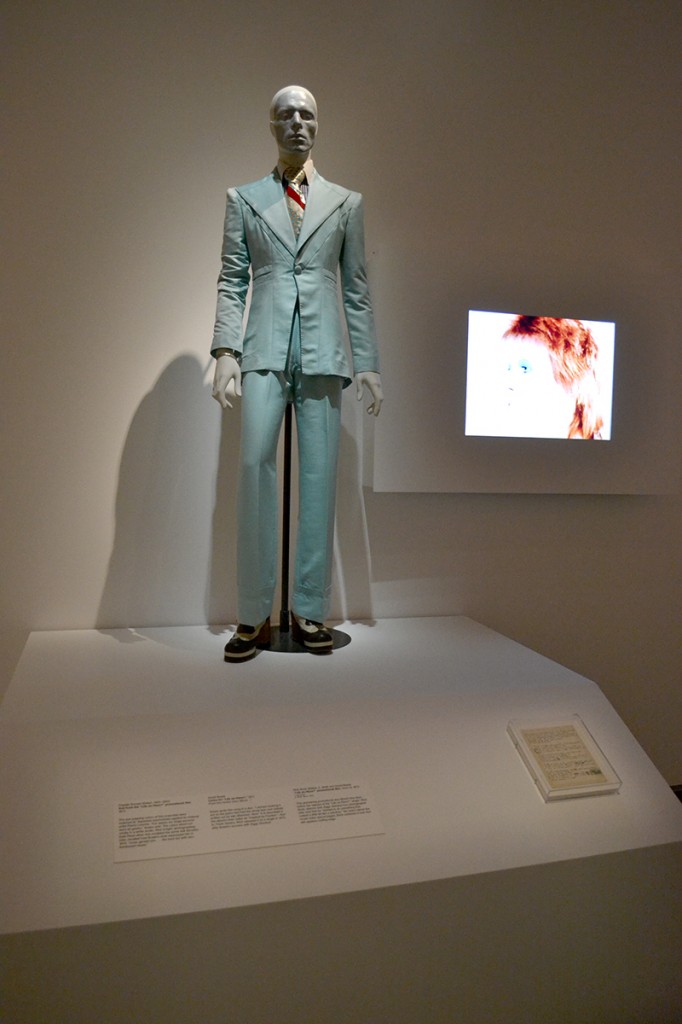 I felt feelings (I am not entirely made of stone) while immersed in the minimalist display honoring “Life on Mars.” The beautiful, simple, promotional film (proto-music video) is displayed alongside the handwritten lyrics and a Freddie Burretti suit. There was a time when you couldn’t stream everything with alarming immediacy, and this scene inspires a pang of nostalgia for that era of delayed gratification. Brand and hype weren’t the sterile, over-manufactured concepts they have become; rather things that evolved organically and sincerely.

This is not Darling’s first foray into art-rock fandom, with a 2010 exhibition at the Seattle Art Museum (SAM) acting as a precursor. Grunge, the genre of music of which Nirvana was both innovator and media darling, is one of Seattle’s most significant cultural exports. Darling recognized the ghostly presence of deceased singer Kurt Cobain in the local and global art scene more than a decade after his death. The show, simply titled “Kurt,” was a far cry from the straightforward ephemera featured in “Bowie” (ahem, tissue with lipstick). The nuanced works spanned mediums and included powerful shots by rock-documenter Charles Peterson, a heartbreaking portrait by Elizabeth Peyton, and a chilling photograph by Chicago’s beloved Melanie Schiff.

Darling says of the difference between the two shows, “I think I was a little more brave embracing Bowie and the personal effects that it entails, knowing that there are so many compelling stories that circulate around these objects. It is his life and career that are so fascinating, and to distance that story by relying on art about him would likely not have the same power. Also, Kurt unfortunately did not live very long, whereas Bowie’s long career with its many twists and turns (and all the objects documenting it) is just a different story. Novel versus short story perhaps.”

“Kurt” was the last major show Darling organized at SAM. Despite critical and popular success, the show seemed to lack institutional backing; it did not tour and no catalogue was produced (one of the great disappointments of this writer’s life). It was widely speculated that these factors contributed to Darling’s departure from SAM to the MCA, rumors given voice in renowned Seattle critic Regina Hackett’s salaciously titled “Seattle Art Museum: How to lose a curator.”

Taking a more macro view of the Bowie exhibition and what is to be gleaned from it, Bowie’s ability to conceptually move not only between disciplines but also constantly onward from periods with a fluidity that seems prevalent in today’s most engaging cultural producers is successfully demonstrated. Says Darling of Bowie’s polymath abilities, “He has never limited himself to one area of cultural production.”

The MCA knocked it out of the park with beyond-robust public programs that similarly fuse modes of artistry (dreamboat Chicago rockers Disappears recreate Bowie’s “Low” on November 22, swoon) and corresponding simultaneous exhibitions. With general admission included in the ticket price, you might look for corollaries between Bowie and other works on view elsewhere in the MCA, including the far-out new show by Sarah and Joseph Belknap, the lush and sensual group exhibition Earthly Delights, and Lorna Simpson’s three-channel video “Chess,” featured in the exhibition “Body Doubles.” Says Darling of the resonances throughout the museum, “’Body Doubles’ [specifically] was designed to be a subtle complement to ‘Bowie,’ showing how many of the issues that have defined his career have also been consistent themes in the work of leading contemporary artists.”

So, is it artwork? Does it belong in the MCA? Is it worth the $25 and proximity to mouth-breathing tourists? You, dear reader, will have to decide all of these things for yourself. If I may impart one piece of advice, it’s this: also support the smaller boundary-blurrers we’re so lucky to have in our midst. Multidisciplinary organizations throughout Chicago are celebrating as much collapsing the margins between visual, performance and sonic art, albeit with slightly less glitter. Get your Bowie on and then head over to an evening program at the Graham Foundation, Links Hall, or Comfort Station. They might not be as glamorous, but they are certainly just as fabulous.

“David Bowie Is” on view at the Museum of Contemporary Art through January 4, 220 East Chicago.