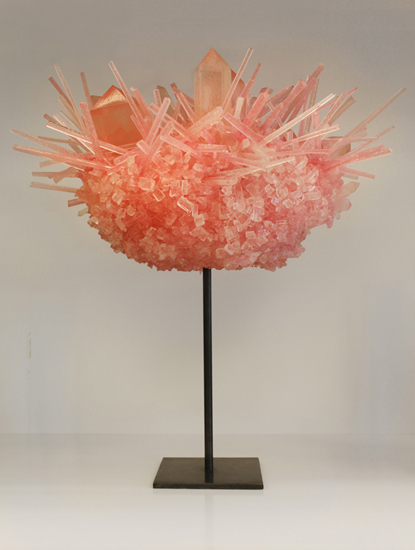 There is something inherently playful, yet disconcerting, when one first approaches Carson Fox’s “Mimesis.” The resin sculptures seem, at first blush, almost coquettish, climbing the walls, sitting upon pedestals, protruding in amaranth and aqua and palatinate, their familiar organic forms exaggerated, coated and made fantastically approachable. They dominate Linda Warren Projects; on every surface sans the ceiling, Fox approaches the installation as an integral aspect of the art itself—see “Orange Coral,” shades of heat, from tangerine to rosso corsa, which spreads across the back wall like an anatomist’s plastinated arterial system, impossibly similar to the real thing (if viewed from no deeper than a few fathoms, of course) down to their dimpled surface. 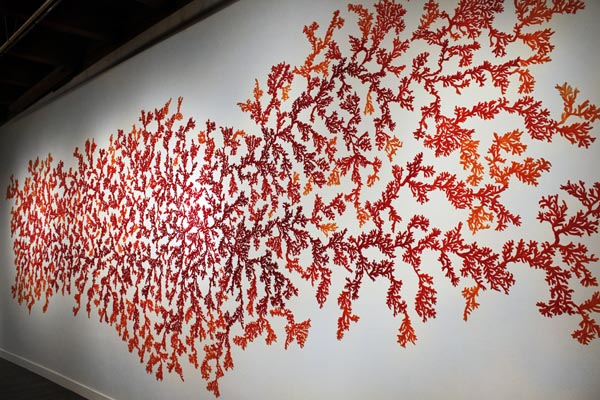 Here is a dysmetropsic rendering of natural forms—geodes paradoxically dwarfing their common gift-shop cousins and falling woefully short of their titanic subterranean champions, staking out a pleasing middle, like the linea alba; a sciurine dream, golden acorns the size of McIntoshes; tree trunk rings similar in shape and hue to a Pepsi can—in a dazzling array of colors. The vast array of textures and shapes on display, most obviously represented in the myriad crystalline structures—which contain obelisks, tendrils, chunks and flakes and irregular masses, looking like colloidal frozen champagne, dazzling quicksilver confetti, voltaic Jovian pasta—engender a deeper assaying which can be applied, expanded to the show per se, to sweeping observations on humanity vis-a-vis nature. Chemical means overcome the impermanence of terrestrial creation. Across Fox’s lavish installation creeps the delicious subversion that comes from recreating—perhaps even improving upon—shock! blasphemy!—natural beauty with toxic media. It becomes difficult to tell, through the pulchritude and plastic, whether Fox is sanctifying nature or supplanting it, genuflecting before creation or substituting her own; she pulls forth these beautiful, terrible ideas as she does the chthonian forms comprising the bulk of “Mimesis.” (B David Zarley)