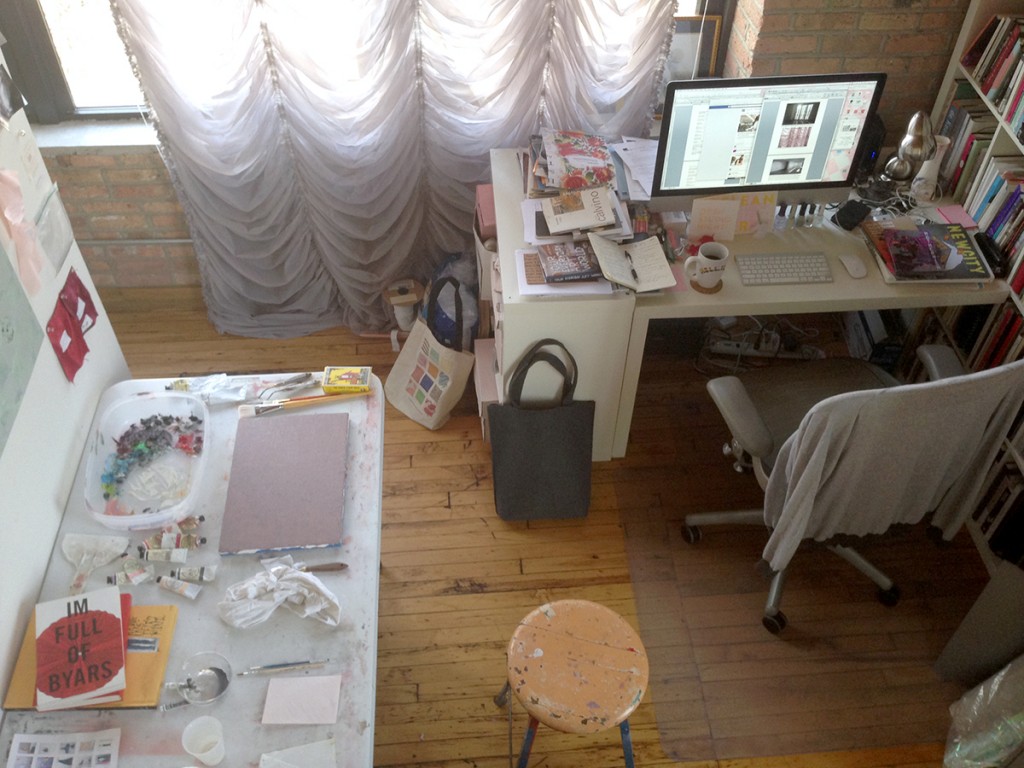 “They hop between revolving scenes, juggle various professional identities, seek out and improvise ever-new situations and contexts for staging what can be recognized and evaluated by their peers as art, all squeezed into schedules already bloated with myriad non-art activity.” This is how art critic and Northwestern professor Lane Relyea depicts the contemporary art laborer in his 2014 essay “Afterthoughts on D.I.Y. Abstraction,” a digestible think piece that shares the concerns he investigated at length in his 2013 book “Your Everyday Art World.”

His take is poignantly accurate. Our town (and increasingly more of the art world) runs on multi-hyphenate cultural producers who not only make art but also curate, write, teach and run alternative galleries. We’re embedded in a pervasive labor economy that has mutated into part-time work status, short-term contracts (or no contracts) and a demand for flexibility, availability and diversified skill sets. I’ve been writing this text along with two other articles and a grossly overdue catalogue essay this week, while teaching two courses at SAIC, troubleshooting shipping and consignments for an exhibition I’m curating, and stubbornly insisting on the better part of two days in my studio because I’m falling behind in my production schedule for an exhibition next year. My workload isn’t extraordinary or even varied beyond the status quo. It’s not exceptional that I slip between myriad roles; in fact it’s all day, everyday for most of us.

While Relyea’s analysis is useful in symptomatizing our labor and, indeed, we may all be acting out tacit directives that guarantee even more insidious modes of capitalism and lifetimes of instability for a burgeoning “precaritariat,” I’ve wanted to better understand artists’ presumed motives for working across disciplines in personally attuned panoplies of creative output. I wrote to a number of other folks in Chicago to hopefully compare notes and maybe commiserate. Everyone who replied was frankly honest about diversification as a means to make a living while also holding to the possibilities that these hybrids allow (or at least once allowed) for nimble forms of criticality and subversion.

For Shannon Stratton, director of the nonprofit Threewalls, pragmatism drew her into other art-related professions beyond her earlier studio practice: “I came to do so many things because I needed to make a living. Certainly there is an interest in all of these roles, but necessity really set the path to my CV in some ways.” Now she says writing “might be closer to a practice for me,” and posits these shifts toward pluralism may have evolved in order to accommodate cumbersome questions in creative research that aren’t best served by a single medium. “Survival aside, I think people find themselves occupying many roles because art can be so deeply a life practice, that teaching/writing/curating/making become inseparable and desirable explorations of the world.”

Zachary Cahill concurs, explaining that he uses the interdisciplinarity of his work as an artist, performer, writer, lecturer at University of Chicago and recently appointed editor at Afterall as a means to tailor his work around making connections in an ongoing thought process. “Implicit in all the activities is thinking through ways of connecting with people in various ways. Sometimes a letter is the best format, sometimes an exhibition, sometimes a seminar.” He also observes the financial strain artists are under to find ways to support their work, “You have to have a job to do your job as an artist. Where maybe in the past you could actually have a kind of bohemian existence, maybe the Arts Administrator is a new figure of the bohemian.”

Doubtlessly Michelle Grabner has been this year’s most visible multi-hyphenate. “Like appropriation, it was once a strategic and critical position to engage in various roles,” she writes. “Today the fluidity of time and space trumps any critical self-reflexivity. Basically it is no longer a struggle to do all these things, it is easy, and it is expected.” Grabner earned degrees in studio art as well as art history to better qualify for a tenured faculty position that would underwrite her other creative and familial endeavors, while also noting that cultural capital, as much or more than financial security, characterizes the endgame of this multivalence. “You really only have freedom if all of these activities start to yield influence.”

While Grabner historicizes the capability of multi-hyphenate positions to undermine dominant power structures, several other artists continue to find potential in their enmeshed roles. Artist Maddie Reyna, who works for the website Contemporary Art Daily and co-directs the alt space Julius Caesar, replied, “My work became naturally about power and control and that is often better exercised in organizing, facilitating, reviewing, etc. than through art-making. It’s a more open system as opposed to an elite, hierarchical one.”

Nancy Lu Rosenheim, who runs the Bike Room in Rogers Park and teaches along with keeping up her studio practice, says these ancillary jobs “expands my scope of the possible.” The importance with which Rosenheim qualifies her shared experiences with art may not refute the probabilities of exploitation and exhaustion which are usually understood features of being pulled in so many different directions professionally, but nonetheless serves as an edifying reminder. “I think that multi-hyphenate practitioners have been responsible for overturning institutional power structures—even in the marketplace. I’m not sure that’s subversive, but it’s a game changer. Multifaceted roles are an expression of collective generosity and an emphasis on community—an arts family.”

How subversive has the multi-hyphenate ever been when critical aspirations have always been supplanted by a hustle to make ends meet? Conversely, if work across several roles has recommended multi-hyphenate artists for more stable professional positions in the past and even moreso today, our potential to challenge may be limited by the commodification of the sum of our parts. While I haven’t assuaged my concern that I—many of us—have readily accepted weaker, less stable postures in late capitalism’s ruinous last hurrah, I am compelled by Stratton’s supposition that our roles have evolved as the questions artists pose to the surrounding culture become increasingly complex. All of my correspondents agreed, too, that the whole of their creative practices are enriched and deepened through the disparate ways they spend their time. I asked all of them if it’s exploitation if someone enjoys doing it. Said Reyna back, “Definitely, but who cares.”

[…] by Nigerian Okwui Enwezor, one of the art world’s more visibile and increasingly influential multi-hyphenates. The curator, art critic, editor and writer has most recently served as the director of the Haus […]