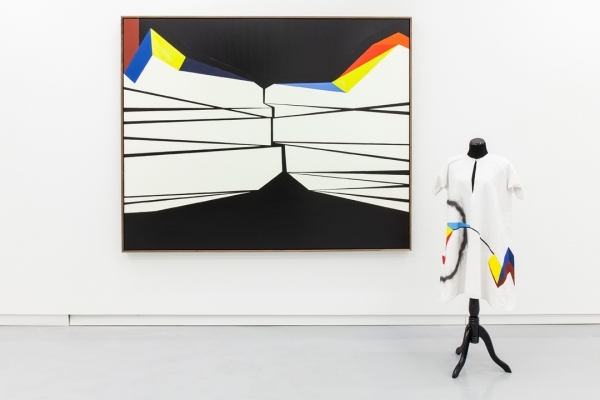 Over the past several years, San Francisco-based artist Clare E. Rojas has steadily expunged the visual elements her work was best known for: the cast of men, women and animals that populated her playful, folk-art-inspired narratives are gone. What remains are geometric abstractions distilled from the design-oriented stages upon which her fables once occurred. Dominated by negative space, only crisp passages of intense, often-primary color interrupt surfaces now rendered austere.

These new works are large and even a little imposing. Of the eleven untitled paintings on display only two have dimensions less than thirty-inches square; the rest seem executed with an eye toward the vast antiseptic expanses of a contemporary gallery. Despite titling the exhibition “Everyone Has Those Spaces,” the works’ size, physical depth (at least three inches off the wall) and lack of convincing surface effects underscore their “object-ness” and they often read sculpturally, like decorated surfaces, rather than suggestions of illusory space. 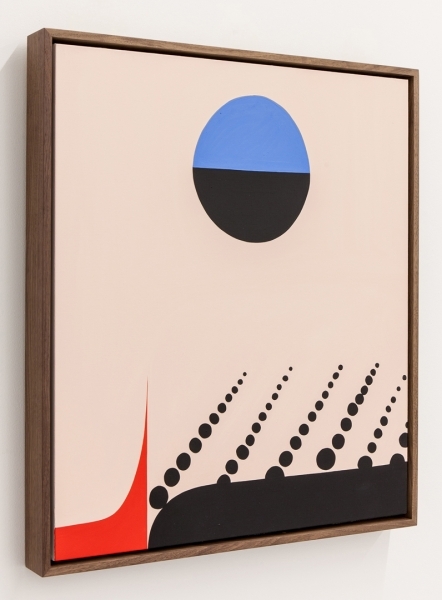 The most striking aspect of the exhibit isn’t the paintings at all, but rather five French linen dresses made in response to the paintings. Featuring patterns and colorful floating forms, they’re visually analogous to the works on the wall while harkening back to the traditional handicrafts and concomitant gender codes that inspired much of Rojas’ early images. During the opening reception, models hired to wear the pieces gently glided around the gallery providing a lightness and vitality that the paintings lack by comparison.

While Rojas’ early work frequently dealt with the very human world of relationships, feelings and identity, these paintings mostly seem content with oblique references to the very insular art-world. There’s a bit of Ellsworth Kelly here, a dash of Malevich there, and maybe a hint of Arp or Miro for good measure. It’s difficult to understand why Rojas would willingly swap an idiosyncratic personal vision for the reduced aesthetic pressures and frankly bland posturing of the thoroughly mined hard-edge abstract tradition. But given the realities of a commerce-driven art world, maybe it isn’t. (Alan Pocaro)