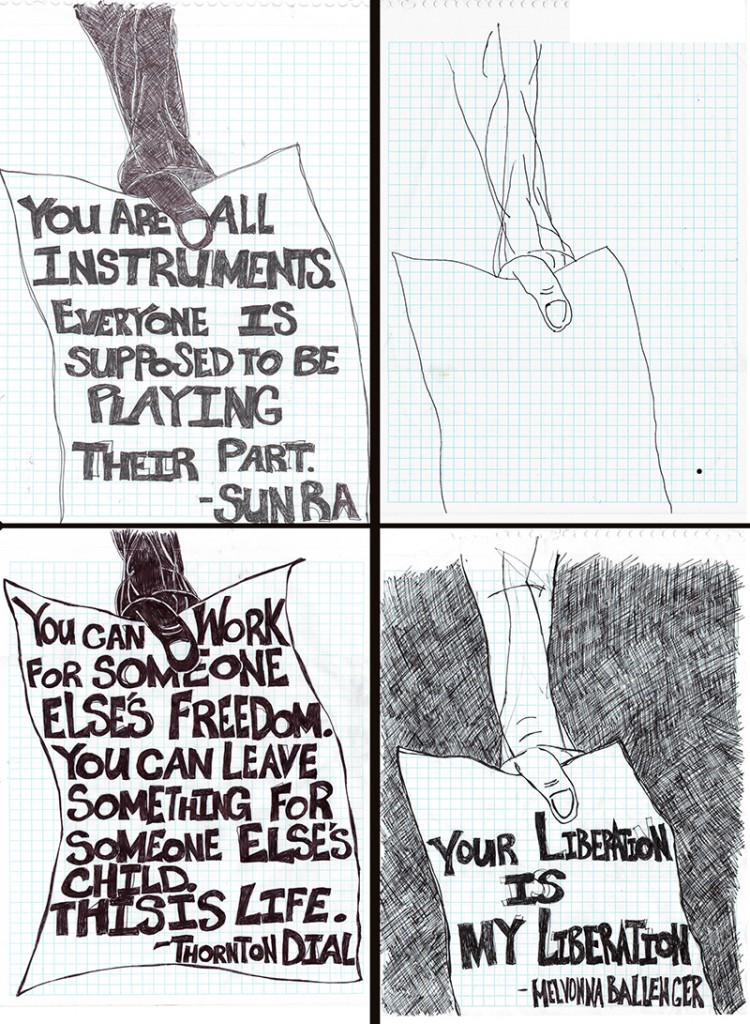 This is our seventh installment of the Visiting Artist column in which we ask an artist to produce a text on a personal topic. Cauleen Smith here reflects on how racial injustice and white privilege and supremacy gets processed in America and in the art world.

This year ends with a whole lot of heartache, rage and the palpable desire for action.

But I suspect that there is a silent contingent of Chicago’s contemporary art community who do not feel emotionally wounded by the injustices we’ve been served; who feel as if offering “the other side” of the argument has no place in this scene. And so perhaps these folks are riding this thing out—waiting for the outrage and hand-wringing to blow over like Ken Johnson’s New York Times review of “Now Dig This” blew over, like Donelle Woolford blew over, like Exhibit B at the Barbican blew over, like Bjarne Melgaard’s remaking of Allen Jones’ bondage chairs blew over, so that they can get back to the business of pure art free from all this tired-ass identity politics stuff. I mean that is so nineties, right? Well guess what. This is not going anywhere.

I’ve recently had a few encounters that have me thinking about ways to structure conversations that don’t put people of color in the position of educating white folk rather than expanding our own consciousness and developing a weaponized vocabulary that can slay white supremacy. There is no benefit to leaving one’s allies hanging. So in that respect, the urgency for this vocabulary is amplified. My standard response to individuals who come to me for “help” in understanding racism is to direct them to the library. Then they ask for a reading list. And then they read a chapter or two, become very uncomfortable and want to process their estrangement with me. That’s about the time when the friendship ends. How can a person who lives the inescapable stresses of white supremacy buttress a person who has the option of accessing that consciousness by picking up a book—and can then choose to just put the book down? The spirit of Trayvon, Eric, Big Mike and the more-and-more has ignited a storm that need not settle. Creative consciousness is rising like Hong Kong umbrellas and Ferguson banners. And so, in the interest of friendship, some terms for civil discourse may be needed.

1) White Privilege: Cultural affirmations of one’s own worth; presumed greater social status; and freedom to move, buy, work, play and speak freely. The effects can be seen in professional, educational and personal contexts. The concept of white privilege also implies the right to assume the universality of one’s own experiences, marking others as different or exceptional while perceiving oneself as normal. (from the Wiki)

2) White Supremacy: The belief that white people are superior to those of all other races and should therefore dominate society. (from the Wiki)

3) Racism: The practice of enforcing white supremacy through institutions and mechanisms of power both public and intimate.

4) Race: A completely fictitious construction devised to rationalize modern capitalism, deployed and performed with a force as real as the air that we breathe.

Guess what? Just like you don’t have to be a man to practice chauvinism, or a woman to be a feminist, you don’t have to be white to be a white supremacist. This term, white supremacy, as harsh as it is, eliminates the ambiguity of intention invoked by notions of racism. A person can say, “I didn’t mean to be racist. I am sorry.” But can that same person honestly say that they do not believe that whiteness is inherently more valuable and more legitimate? If this is denied, what would their actions say? What would their bookshelves say? What would their hiring practices say? What would a sampling of their friends, associates, co-workers and colleagues reveal? And so, what can be known when we apply these questions to our own communities and the arenas in which we make, exhibit and discuss art-work? How do we begin in the journey toward the society that more closely resembles our ideals? Some individuals who benefit from the privileges of dominant culture struggle with the experience of no longer being central to critical narratives. Sometimes, friends, listening is the most powerful gesture one can make. A receptivity to the black-centric narratives we see activated by our stalwart protesters in the streets can be extended (and expanded) to the classroom, the faculty meeting, the workplace, the playground, the museum, the commercial art gallery.

Some friends tell me that my idealism is misplaced—a better understanding of the system in which we live would make it clear to me that the way to win this game is to play the game, not break the game and build a better one. (I gots mine.) This cynicism has gotten us exactly nowhere and yet, I feel it, I hear it, and understand it among people I care about. So I’m joining forces with artists to work on our own minds so that we can build the tools of liberation we need to amplify our capacity for love. This is all I can offer my cynical friends. This is the best offer my estranged friends are gonna get. Maybe they’ll join us. I mean, I just can’t see changing anything unless we all imagine ourselves to be a part of a cosmic continuum of love. And who wouldn’t do anything for love?