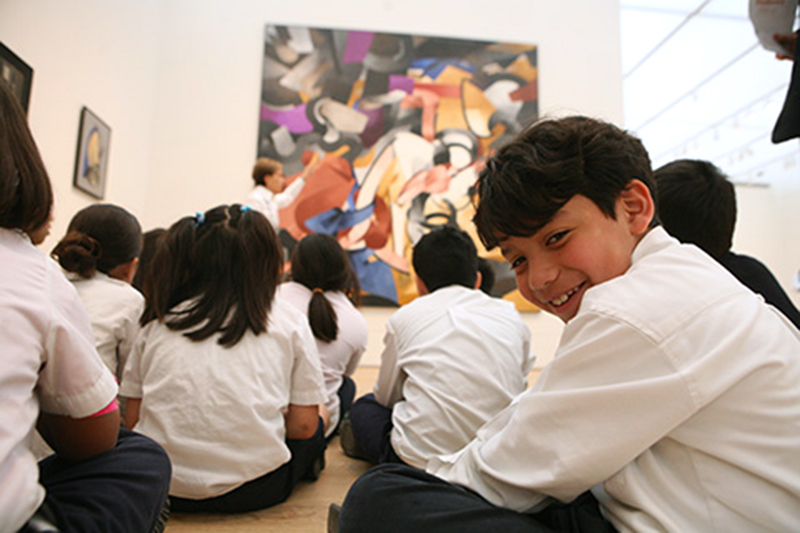 The TEAM program brings selected classes of CPS students into the museum twice a year for tours with specially trained docents.

On December 12, the Art Institute of Chicago (AIC) announced the seventeen schools that will be participating in TEAM: Thinking Experiences in the Art Museum, an educational collaboration between the museum and Chicago Public Schools (CPS) that will run from 2014 through 2016. The program is designed to empower CPS fourth and fifth grade teachers and their students to not only use critical and creative thinking skills but also to further develop them with the observation of artwork in both the classroom and the museum.

During this two-year program, a group of twenty-five teachers from the selected seventeen schools will participate in a total of ninety hours of professional development at AIC. The first year is primarily dedicated to educating the teachers about thinking skills and how to use them as well as how to transfer that knowledge onto their students when returning to the classroom. During this time, museum educators visit the TEAM classrooms numerous times, working directly with the fourth and fifth graders after which the teachers receive follow-up emails with tips and thoughts on how they can translate the approaches used when studying the artwork to core subjects like language arts, math, science and social studies. Each class will also visit the museum twice per school year for TEAM tours led by specially trained Art Institute docents who use genuine pieces of art to reinforce the thinking skills previously used in the classrooms.

TEAM was originally a pilot program that was created in early 2009 by AIC’s education department and is now funded by a generous one-million-dollar grant by the chairman and chief executive officer of Chicago-based Grosvenor Capital Management Michael J. Sacks and his wife Cari Sacks.

The actual program launched last summer, so Newcity wondered why a press release was sent out mid-December. Says AIC’s managing educator Karin Jacobson, “Now that it’s up and running, we wanted to highlight several important elements of the program, the first and foremost is the important relationship between one of the city’s major cultural institutions, the Art Institute of Chicago, in working closely with CPS. Second is the support of this project by the Office of the Mayor, underscoring the importance of art education and the CPS arts plan.” This was also the first time that TEAM publicly announced the participating schools and teachers, a full list of which can be found at the end of this article.

Since the summer, teachers have already participated in eight professional development days by attending a multi-day Summer Institute. Jacobson, along with the museum’s TEAM educators, Elisheba Fowlkes and Kendall Swett, have already visited each of the twenty-five teacher’s classrooms twice and each class has come to the museum for its first visit. The CPS elementary schools were chosen based on an arts ranking that indicated either a 3 “developing” or 4 “emerging” (the majority of the selected schools fell under this category) when concerning the incorporation of arts in the classroom, the students of which are representative of average economic demographics for all of CPS. The seventeen schools also represent ten out of the thirteen CPS districts.

In an email exchange, Jacobson delves into one of the key benefits and goals of this program: “TEAM is predicated on visual literacy: learning to be aware of what one sees when one engages with a work of art. A thinking skill, observing, for example, is employed in multiple ways to evoke a deep engagement with the work. The consciousness of having done this (metacognition) is also a thinking skill that is acknowledged as well. The crux of the program is to transfer the use of these thinking skills learned through interactive engagement with works of art to core curricular subjects, and so TEAM educators provide a set of prompts after each classroom visit that spur teachers to incorporate each thinking skill in the language arts, math, science or social studies curriculum they are already teaching.”

In the press release, CPS CEO Barbara Byrd-Bennet shares her excitement about the program saying, “Through our first-ever arts education plan, a comprehensive strategy is now in place to ensure access for all students from preschool through high school graduation to visual arts, music, dance and drama. The TEAM project will help elevate the arts as a core subject and support teachers as they deliver instruction that will foster students’ creativity, innovation, critical-thinking and communication skills.” (Mahjabeen Syed)