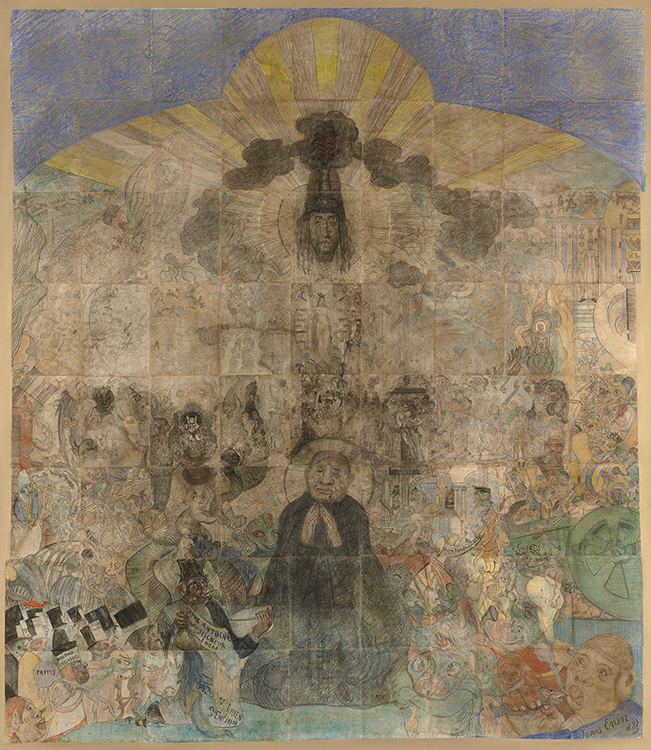 James Ensor’s six-foot-tall drawing “The Temptation of Saint Anthony,” 1887, is the exhibition’s thematic and physical centerpiece, set like an altarpiece at the end of a dark, chapel-like corridor. It’s a dense tangle of scary figures and texts, and a teeming universe of references to the artist’s life. The Art Institute wisely bought it in 2006; it hasn’t been shown in sixty years. Composed of fifty-one separate sheets mounted on canvas, it’s a conservation triumph. Stylistically, it’s a cross between Northern Renaissance art and the cramped doodles of underground comics. Indeed, Ensor’s drawing-based art was expressed in almost every two-dimensional media, including the then-new manufactured color pencils. 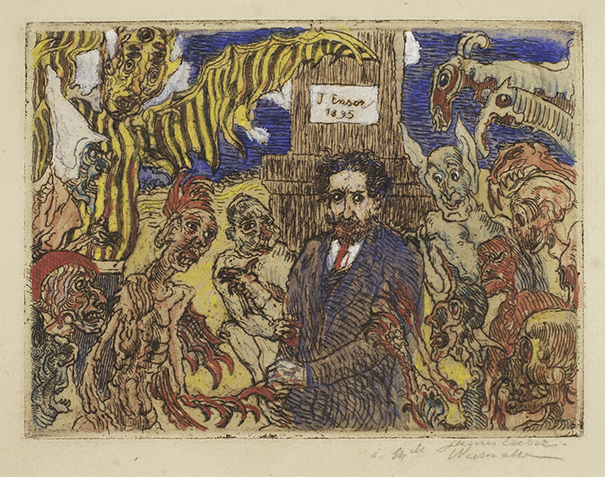 For almost four decades, Ensor’s studio was in the attic of his parents’ house, a curio shop in seaside Ostend. Its inventory inspired the mummery seen in his pictures. Above all, however, his art mirrored his life. “The Bad Doctors,” 1892, illustrates, George Grosz-like, doctors extracting a tapeworm, a malady that afflicted the artist himself. Friends said he looked like a scruffy English politician. Even so, the slightly agoraphobic Ensor was an active art-world player, linked to such avant-garde groups as Les XX. 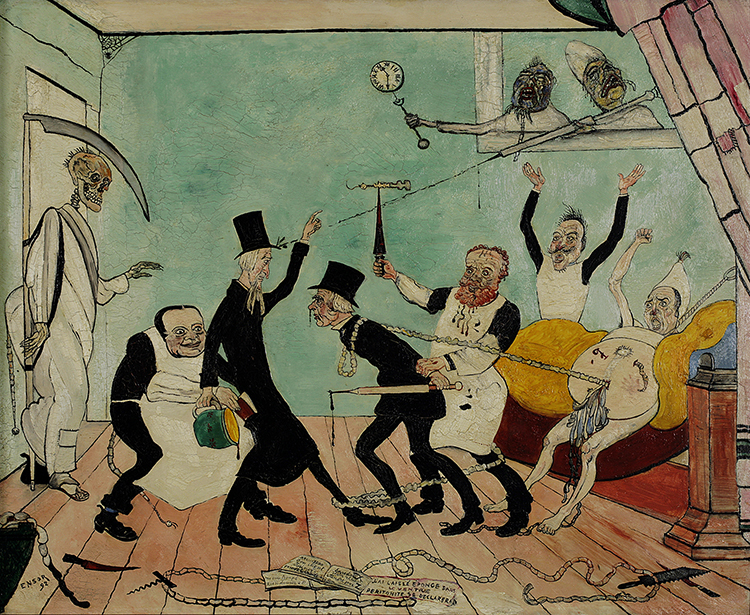 To provide examples of his inspirations, also included in the show are Japanese artworks, lithographs by Redon, and the quirky fifteenth-century Schongauer print of St. Anthony, the one with all manner of Gothic critters tugging at him. The amount of artworks here is almost overwhelming, revealing that Ensor’s art was at various times Post-Impressionist, Symbolist, Expressionistic, and proto-Surrealist. Despite the mask-filled pictures for which Ensor is justly famous—the well-known “The Intrigue,” 1890, is here—lesser-seen landscapes such as “Rooftops of Ostend,” 1884, are revelations.

Perhaps not surprisingly, Belgium has produced other fantasts like Khnopff, Delvaux and Magritte. It’s also where oil painting was invented, and where the largest number of comic illustrators work today. But despite the culture that produced him, Ensor remains a true original. His pieces don’t reproduce well, and many have been lent from the distant Royal Museum of Fine Arts in Antwerp, so it’s best to see them in person. (Mark Pohlad)

Through January 25 at the Art Institute of Chicago. 111 South Michigan.