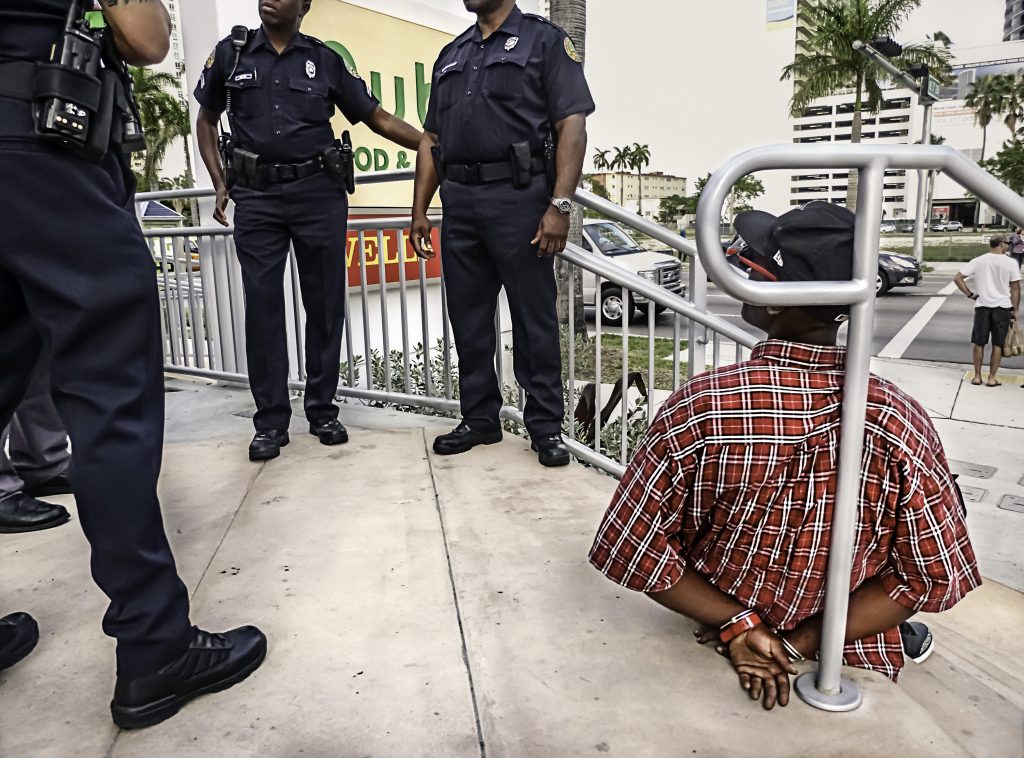 In a series of “narrative portraits” taken on the streets of a relentlessly sunny Miami, Florida, Wes Carson seeks to capture a “particular moment” in the city’s “cultural history”—the scene of our times. Reflective to a fault about his practice, Carson’s shots are candid, because he is going for “authentic moments,” which means that he has to shoot at middle distance, forsaking intimacy in order to avoid his subjects performing for the camera. That strategy could have been fruitful had Carson looked for telling juxtapositions and ironies as street photographers of the classic tradition do (and he does some of that with the play between subjects and signage); but most of Carson’s fourteen photos catch ordinary people doing ordinary things—sitting outside or idling on the sidewalk, some of them absorbed in cell-phone conversations.

There is not much of a narrative to unpack in, for example, a shot of a woman walking across a street holding a baby, unless one uses it as an excuse to let one’s imagination run free. In only one of his images does Carson present a single-shot still drama; we see, from behind, a young man sitting on a concrete walkway, with his hands cuffed behind his back, looking up at four standing police officers whose heads have been fully or partially cropped out of the frame. The anxious gesture of the suspect contrasts starkly with the stolid impersonality of the cops, and we do not have to use our fancy to provoke our emotions and judgments, whatever slant they might have. Yet even then, where there is a narrative in the image, there is nothing distinctive about Miami’s culture in the scene. As Carson represents it, the place is Any City, U.S.A., on a hot, sunny day, where the elderly push walkers, young couples make out, and people smoke cigarettes meditatively—the comforting banality of everyday life that spans innumerable moments of cultural history, indifferent to changing fashion. (Michael Weinstein)