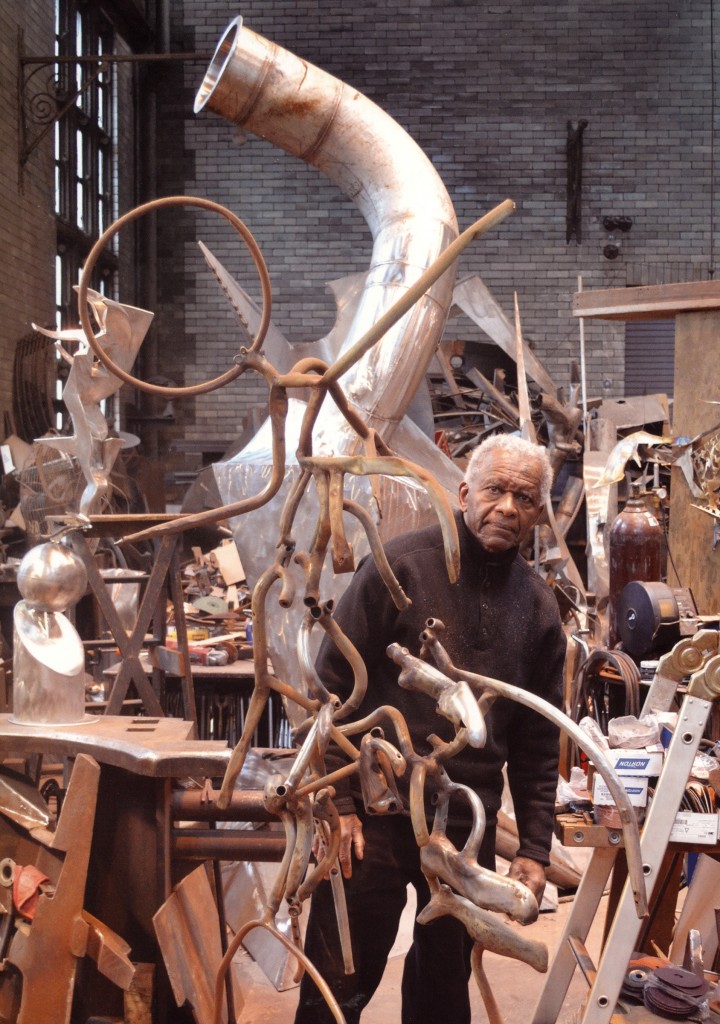 Two concurrent exhibitions at the Museum of Contemporary Art and the Chicago Cultural Center crown the sculptor Richard Hunt’s eightieth year. To date, Hunt has produced more public sculpture than any other artist in the United States, with 125 currently on view, thirty-five of which are in Chicago. Hunt completed his studies at the School of the Art Institute of Chicago in 1957 at a time when other black artists were scarce and the approach to welded metal sculpture Hunt had started to pursue wasn’t supported by the school’s studio facilities. Footage playing at the Cultural Center’s exhibition shows a dashingly handsome young Hunt setting up shop in his parents’ basement. By 1971 he had been honored with an exhibition at the Museum of Modern Art, and his diligent efforts have been continually rewarded throughout his career. Taken together, the exhibitions offer audiences examples of early investigations, to-scale maquettes for larger outdoor commissions, and a breadth of two- and three-dimensional works that ground flighty abstractions in a gravitas tempered by the struggles and victories of modern life.

From the start, one sees Hunt aligning his artistic pursuits with a powerful shift in industrialization at the end of the 1950s. The MCA’s exhibition curator Naomi Beckwith says, “He stays very much married to using materials that are part of our lives as industrial beings. That says a lot about what happened in the U.S. after the Second World War… and it says a lot specifically about Chicago, a city whose fabric is built on industry work. Heavy metal, really.” This can be seen in an untitled figurative work from 1958 at the MCA rendered in a collage of sourced metals that bear stamped patents from manufacturers in Detroit. 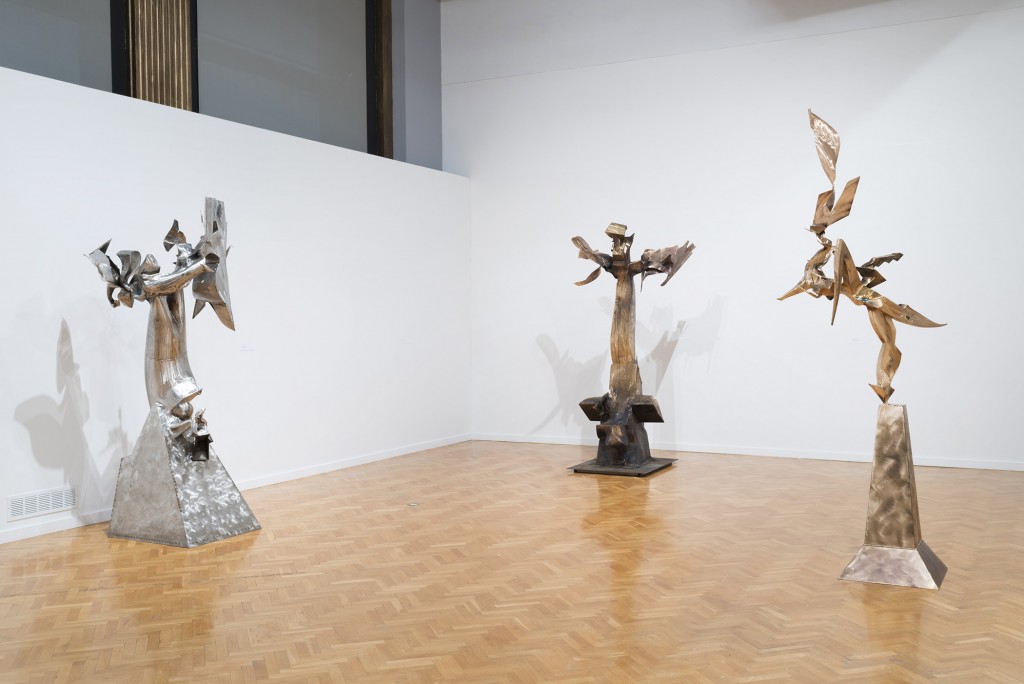 The Cultural Center’s survey is sensitively installed—the study for “Freeform,” which is mounted high on the outside of the State of Illinois Center’s façade, is hung about ten feet up—and shows a practice more confident with age. Early linear investigations in chromed steel sprawl across the floor, bent into shape about fifty years prior to Roxy Paine’s flashy “Dendroid” sculptures they resemble. More recent works like the 2014 “Jo’s Apotheosis” shift from Hunt’s early drawings in space to chunky directional shapes that echo some of the graffiti art shown in the same gallery last year by Hebru Brantley and the Center’s group exhibition “Paint Paste Sticker.”

Hunt is an artist without simple categorization, but rather one who moves through eras and traditions, staying awake to the changes in the world but solidly committed to working out the particular paradigm of inquiries that fuels his practice. A comparison to Louise Bourgeois’ venerable career might be made, but where her work delved ever deeper into an interior psyche, Hunt’s turn to the public as a setting and generator for his work dispenses with the centrality of the artist’s ego. In a statement from 1989, Hunt writes, “Public sculpture responds to the dynamics of a community, or of those in it, who have a use for sculpture… These possibilities are often realized through the creative interaction of the artist with patrons, or patron groups in their conception, and with engineers, technicians, and tradesmen in their execution.” Despite the enormity of his prolific undertakings, there is throughout a subtle relish of operating more like a factory worker executing a shared vision born from specific spaces and collaborators. Says Beckwith, “We have in the modern moment this heroicized view of the singular author, and Richard isn’t so much invested in that.” 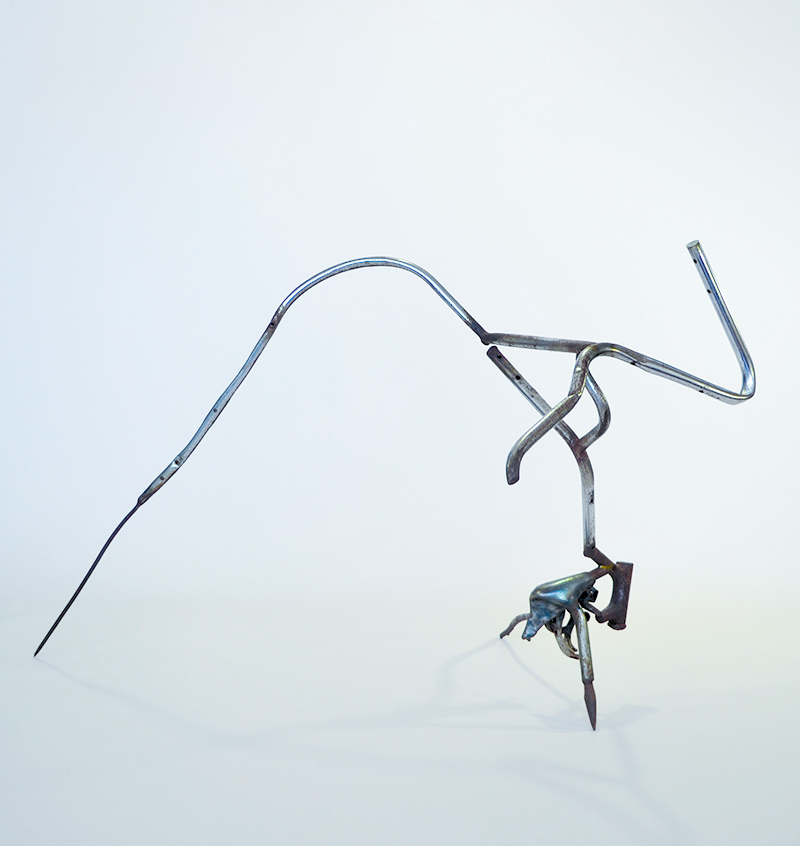 “Farmer’s Dream,” 1980, lurches forward proudly in the MCA’s central hall after previously appearing on the lawns of the White House during the Clinton administration. Coming from a generation of African-American artists for whom abstraction was often fraught territory—when abstraction by black artists was accused of docility, a submissive way to participate in art while seeming to ignore one’s own cultural particularities—Hunt develops forms that are not as explicitly figurative as his early work, but nonetheless bears thoughtful allusions to black struggles in America. “If you look closely—especially at works like ‘Farmer’s Dream’—you see things like plows and farming implements. These are things that speak to an African-American agrarian past,” observes Beckwith, who said that Hunt’s means of representation and figuration drew her to this work. Here and elsewhere, even the most twirling lyrical forms taper into talons.

Hunt’s commitment to resplendent, upwardly mobile images of achievement make me uncomfortable, proceeding alongside, as they have, sculptural movements of increasing malaise like the ‘scatter art’ of the late eighties and the ‘Unmonumental’ turn in the aughts—not because I think they are anachronistic but because his willful, continual reworkings of flights forged from materials of such weight remind me, and hopefully an art world at large, that there are corners of this country where some reside who have yet to achieve the dreams kept therein, have yet to be shown that it is valid for them to even pursue them. Hunt’s chrome-plated trophies aren’t fanciful; rather, they are the outcome of a hard-won struggle to wield an industry’s means of manufacturing at a more personal, psychological scale. As Beckwith points out, “There’s a poetic dichotomy between this earthiness and what I would call a kind of immanence, the celestial, and the heavenly.”

Exhibitions continue at the Chicago Cultural Center through March 29, 78 East Washington; and at the Museum of Contemporary Art through May 17, 220 East Chicago. A panel discussion with Hunt will take place at the MCA on January 29, at 6pm, and a conversation at the Cultural Center on February 26, at 6pm.