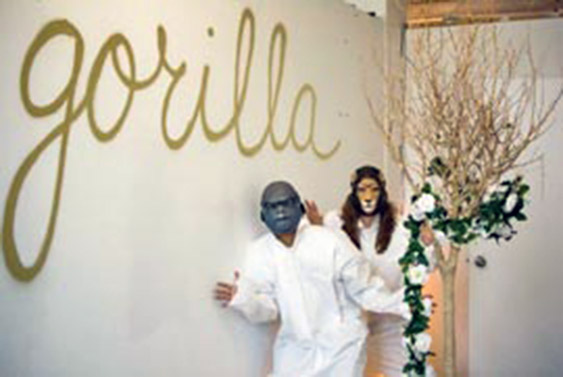 In the crux of our present-day political and social troubles, where food famine exists all around us and threats loom in the air over something as common as a controversial American movie, it isn’t farfetched to wish for a utopia. Here is your escape. Gallery concept Lion VS Gorilla (LVG) has partnered with the Hairpin Arts Center for “Crystal Palaces in Cockaigne,” an art show and mini-exposition on utopias centered on the medieval myth of Cockaigne, an ideal land of endless ease, hedonism, health and luxury. For those who, like myself, hadn’t yet heard about Cockaigne, it is a land where it rains cheese and roasted pigs saunter by with cleavers in their back among other fascinating occurrences.

LVG’s last group show was about destruction, in which all the pieces were destroyed during the duration of the opening. A show about utopias felt appropriate to follow, say LVG creators Jimmy Bulosan and Heather Phillips. “Crystal Palaces in Cockaigne” will feature work by both established and emerging artists in a range of media including drawing, fiber, painting, sound and video with a particular emphasis on sculpture. The various works will focus on idiosyncratic, trans-human, as well as personal visions of utopias. The group show opens on January 24 from 8pm to 11pm on the second floor of the Hairpin Arts Center, at 2810 North Milwaukee.

The selection process for the eighteen artists whose work will be on display was based primarily on the relationships LVG had previously established with artists as well as reaching out to emerging artists whose work spoke to their project’s concept, explain the LVG duo, who say the idea for the show has been brewing since May of 2014: “We were most interested in pieces that explore personal and idiosyncratic ideas of utopias—thinking more about the question ‘what would utopia be like for you’ rather than ‘what should utopia look like for everyone.’ We wanted to keep things playful, irreverent, and optimistic and to avoid the common default of utopias turning to dystopias.”

Perhaps the most unique aspect of this show is the lineup they have for the six mini-expositions days following the opening. Each night, from January 26 to January 31, LVG has an “all-star” roster of organizations and interactive events. Each group/activity they have teamed-up with will explore some sense of utopic thoughts, says the LVG team, who think you should stop by because, “It’s gonna be awesome!” (Mahjabeen Syed)

A complete list of artists and specifics on events for Crystal Palaces in Cockaigne can be found here.

[…] team up with local art gallery concept Lion Vs Gorilla for their weeklong mini-expo on utopias, Crystal Palaces in Cockaigne!  It has all the things Nerd Nite loves best:  Booze, Truth, and Booty. […]