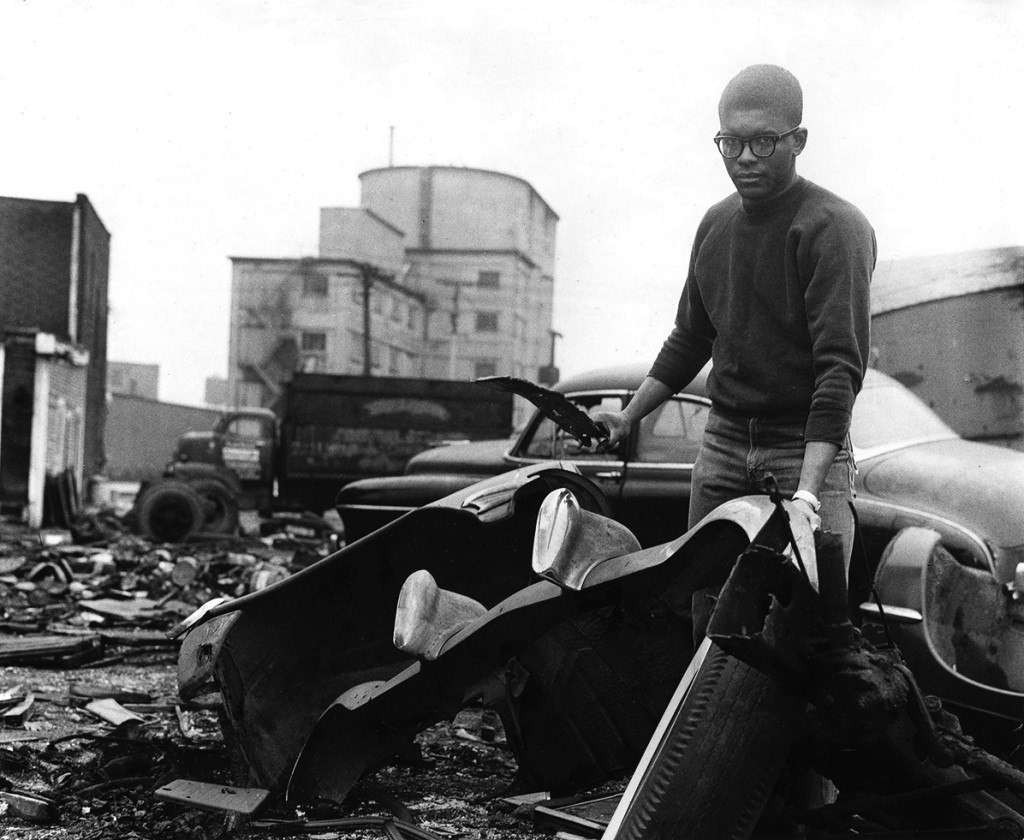 Could you set up your take as the curator on what the Richard Hunt exhibition at the MCA is?
The show from the MCA starts from the premise of our collection. It’s part of what we call our MCA DNA series, and those are dossier shows—small jewel-box shows—that are about highlights from the MCA holdings that most people don’t even know that we have. So for instance we have another beautiful one up right now featuring Alexander Calder; there’s a huge collection of that in Chicago, many of them right here in this building. Another wonderful one that we put up recently was a collection of Dieter Roth art books that I hadn’t even known were in the collection. The DNA series is a chance for us as a museum to really highlight works of significance that most folks don’t know are here.

I found out that Richard Hunt was turning eighty this year. I realized the best way that we could honor him was to do an exhibition and—oh, my goodness—there are these works in the collection. I knew that the museum had a long history of helping organize the inclusion of a work of his at the White House. It’s a work called “Farmer’s Dream” that was exhibited in D.C. during the Clinton administration, and then when it came back from D.C. it went into Seneca Park, which is the park straight across west of the MCA. It was there for many years and then acquired by the MCA. These kinds of stories I knew, but I didn’t know that we had some of his early work from the sixties here, and we have some works on paper in the collection. The show is really compact, and is set to show the breadth of Richard’s work from his earliest days—the earliest work is from ’57 when he was finishing school—to a work made in, I believe, 2012.

Was the MCA show coordinated with the Cultural Center show?
Would you believe that it was a happy coincidence.

That sounds like the art world, yes.
And that sounds like Chicago, right? He is clearly a lion of sculpture but also a really important figure for art and culture in the city. It’s no surprise that multiple institutions wanted to celebrate that at the same time. I also think it’s really helpful that our show focuses on things in our collection, so we didn’t have the sort of disputes over who gets what. We have our things here, and there are a couple of significant works borrowed from MCA supporters.

Hunt has had exhibitions throughout the years, but is perhaps predominantly known for public work. How do visions that have been so focused on outdoor site-specific works live within these exhibitions in gallery spaces?
A public sculpture is really a work that is about responding to a site. You have to think about things in an architectural scale. You have to think about things like safety. You can be incredibly ambitious with form and material. What you see in the works that are made from his studio practice are a chance to watch Richard’s hand move over materials. You begin to see how he’s really drawing lines in space, even with things in metal. When I talk about drawing, it’s not a mark on the page, not two-dimensional, but you can really see that same sense of movement and expansiveness into space in these works from the studio. 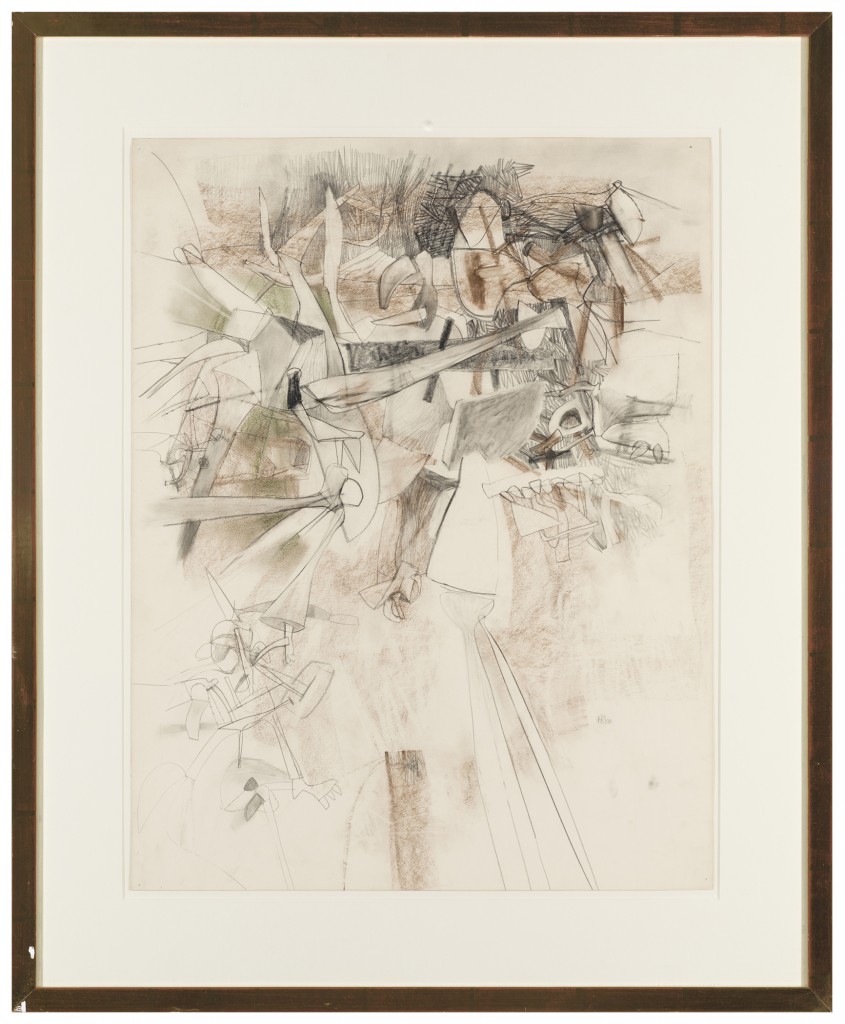 How would you characterize Hunt’s aesthetic sensibilities?
The first thing I would characterize—and you can literally see this from the earliest to the later work—you can see his mastery of material and technique. Of course they’re mostly metals, though you’ll see some wood in both the shows. You see him moving from someone who’s collaging together metal pieces—it looks like a kind of palimpsest—to someone who is making these seamless movements from one piece to another.

The second thing I would say is his insistence on using industrial material. He stays very much married to the idea that art had to expand from materials that we had considered noble, standard art materials, to using materials that are part of our lives as industrial beings. That says a lot about what happened in the U.S. after the Second World War when we were suddenly producing a lot of industrial materials, and it says a lot specifically about Chicago, a city whose fabric is built on industry work. Heavy metal, really. Richard is very much dedicated to the idea that there is beauty and nobility in those materials.

And the last thing on his aesthetic is this kind of aspiration. I mean that almost in the root sense of the word, almost like breathing out and upward. So much of this work is about extending from a central axis point but reaching up. This work is as much about a kind of balletic movement as it is also about hopes and dreams.

If we look at these industrial materials that, as you say, are imbricated into American progress that take the form of lyrical flights and ascensions, is there something that can be read between Hunt’s choices of materials and forms?
There’s a massive illusion between the form and the material. The illusion being that you get something incredibly heavy and make it look weightless. These are techniques that go all the way back to the Renaissance; think about Bernini sculptures where he can make marble look like a cloud floating. These are lessons Richard learned in Rome. He traveled to Rome as soon as he finished school; he got a fellowship from the Art Institute. He was obsessed with this idea of how one can make the work illusive. It also speaks to the idea that the only way to get to space or to the heavens is by working with this heavy material, the stuff that feels like it’s from the earth. There’s a poetic dichotomy between this earthiness and what I would call a kind of immanence, the celestial, and the heavenly.

These exhibitions include more recognizable figures, heads, along with more abstract, undulating forms.
These are themes he returns to again and again. The earliest work in the MCA show is a sculptural work that looks almost like a portrait. It’s very anthropomorphic. It is a man done in human scale, which is very exciting for me to show that because I’m really interested in how the work evolved into abstraction from a more figurative form.

That reminds me of the panel discussion you were on at the Block Museum that coincided with Terry Adkins’ exhibition. A thought started to get introduced that may not have fit within the time constraints on that day’s discussion about some of the pressures around moving into abstraction, during the time that Richard Hunt did, for a man of color in the United States.
The pressure, if we want to use that word, was probably felt more acutely by sculptors than painters. There’s been a long abstract painting tradition in an African-American art history that has been accepted as a natural part of that history. But in sculpture what’s really fascinating is that oftentimes you get this play between the work being representational and purely abstract. I think Richard was interested in a few things. One we alluded to: the space race, industry, the move to the heavens. I think he’s incredibly influenced by Isamu Noguchi. He was friends with Noguchi, who was interested in abstract forms that spoke to his cultural past. For Noguchi that meant the simplicity of a kind of Zen Buddhism that informs his Japanese background. For Richard, if you look closely—especially at works like “Farmer’s Dream”—you see things like plows and farming implements. These are things that speak to an African-American agrarian past. I think the lesson from this is that non-representation is not the same as sheer abstraction. The works may not look as though they figure or represent something specific, but the way they move and the shapes they take on really are referencing some kind of cultural relationship for the artist.

We’re treading into big questions that could take all evening…
Yes, how do you reference the culture without having to represent the culture.

To not have to be an ambassador or spokesperson, but also to feel like those issues—whether it’s race, sexuality, gender or other means of identification—can be informing without limiting the scope of a project that deals with abstraction.
I don’t even think it’s always a question of a forced inclusion. Sometimes it’s really about what you know. You see things and those visual things start to shape the way art is made. Something else I would mention which is true of both Terry and Richard is that they’re both hugely influenced by music. Music is that form by which you can be referential while remaining abstract, walking that fine line that’s not figurative but referential. I think both of these artists learned that from music.

Another thing I could talk about as an art historian is that I’m really fascinated by the really oddly postmodern forms Richard worked with early in his career, and the way he held onto it in a way that is more classical in the later work. Those things are also pulling back and forth: the postmodern and the classic.

His move into having a studio practice alongside public works complicated something around Hunt’s authorship, as if he relishes responding not only to site but also responding to the entities that were commissioning the work, their expectations. It seems like a powerful reformulation of where the artist ego resides in the formulation of these visions. Does he seem to enjoy the shared vision of working in sites with so to speak collaborators including those funding and overseeing its production?
I think that is so prescient, and I think you’re right. The dispersal of an ego in his public art is so significant. He calls his public work “a second career.” One has to work in a space that is deeply different from what you would do inside the studio. That’s not so different from the industrial process. Again, the kind of humility and immanence that’s in his work—I think he wants to hold onto that. We have in the modern moment this heroicized view of the singular author, and Richard isn’t so much invested in that.

Right. And as other movements around that time, such as Minimalism, are quoting from industry, it really does get consolidated back into very rigid points of view that limit where the author is or isn’t dispersed.
The work where you really see the sourced metal has everything to do with saying that this work is really about a set of processes. It’s not the product of an author, but really more a conclusion of a set of steps, which were about going out and sourcing material, the object where it came from showing its history and how it was fabricated by another set of hands or machines, and everything seems to be in flux still.

When Richard was a student at the Art Institute, one has to remember that there was no studio for what he was doing. There was no such thing as a metal-welding studio practice. He had to invent a studio. He was taking classes with the artisan metalworkers and the wrought-iron guys, and then going to build out a studio in his parents’ basement. We’re talking about a really kind of new and innovative practice.

Exhibitions continue at the Chicago Cultural Center through March 29, 78 East Washington Street; and at the Museum of Contemporary Art through May 17, 220 East Chicago. A panel discussion with Hunt will take place at the MCA on January 29, at 6pm, and a conversation at the Cultural Center on February 26, at 6pm.