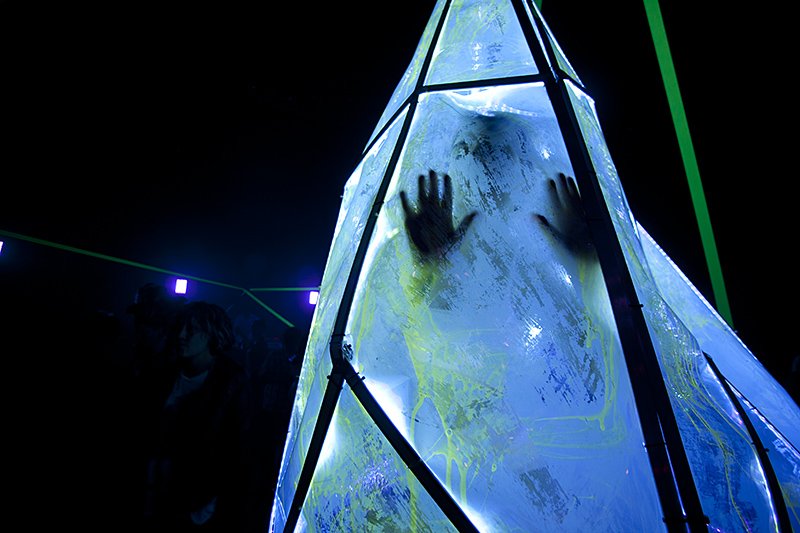 Tomorrow night is the start of “REVIVAL 2015: Source Evolution,” four evenings of interactive performance experience at the Jay Pritzker Pavilion Stage at Millennium Park, located at 201 East Randolph as part of the Chicago Department of Cultural Affairs and Special Events’ (DCASE) OnEdge performance series. REVIVAL has received a two-week residency at the Pavilion during which collaborators Eric Hoff and Jesse Young present a line of exploration for their artists and attendees to consider: “We can go back home. Can we go forward home?”

About REVIVAL’s residency, DCASE’s director of performing arts, Shoshona Currier, says in the press release, “DCASE is happy to welcome REVIVAL back to the Jay Pritzker Pavilion. After developing this project through our In the Works residency program, we’re thrilled to support this next iteration and provide a platform for a wide array of local performance artists who are engaging in a practice that is not always recognized in the forefront of our robust theater and dance communities.”

The first iteration of REVIVAL occurred in late October 2013. DCASE gave them two nights at the Pritzker as part of their In the Works series. REVIVAL started with a conversation that took place two years ago, explain Hoff and Young, “We discussed whether or not spirituality was inherent to queerness and from that conversation the image of a revival tent manifested. A revival in the conventional sense is a gathering that people attend expecting connection with something beyond themselves and a desire to leave transformed. We saw the parallels between a revival and big queer dance and started developing them.”

After thinking about their, “going forward home,” prompt, Hoff and Young formed the phrase “source evolution” to stand as the focus of this year’s REVIVAL. They realized that people have various ideas about what home is: a physical place, a feeling associated with the senses, etc. The two creators and producers are interested in the idea of home (whatever that might be) and how we as humans can evolve while still maintaining our origin while also questioning what it means to go forward home versus regressing back as is often expressed. 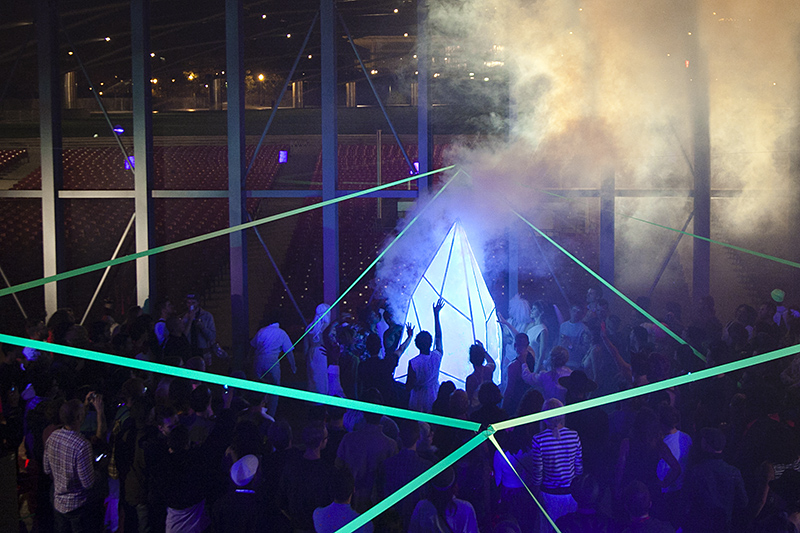 In an email exchange, Hoff and Young clarify that REVIVAL 2015 is not to be confused with a Sit & Stare event but rather a Choose Your Own Adventure Performance Art, because at the lower level of the Pritzker, there will be six different performance pieces ensuing simultaneously and the attendees can go wherever they choose. Only at 10:30pm does everyone reconvene for the culminating event leading up to a dance that extends til midnight.

More from Hoff and Young, “At the end of the day we want art to be about connection. Connecting artists and audiences. Connecting artists with artists. Connecting audiences with each other. Connecting people with their hearts, their minds, and their bodies. We love to dance. What better way to connect with others than on a dance floor? When your blood gets pumping inhibitions fall away.”