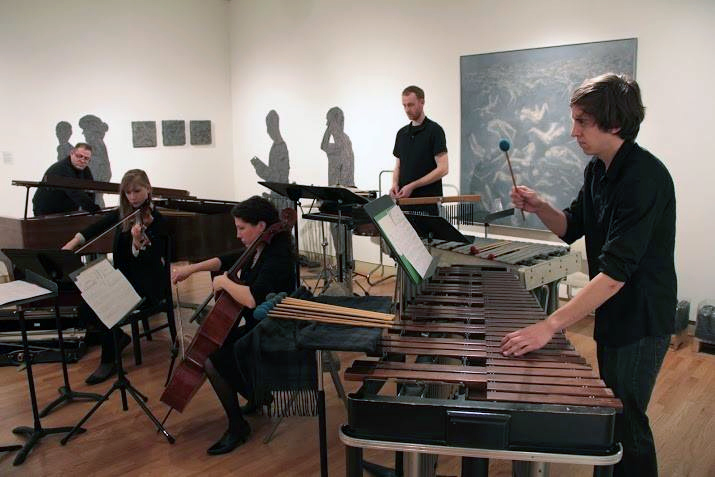 The 2015 round of Ten x Ten collaborations between musicians and visual artists will start with a kickoff event this Sunday, February 8. Under the curatorial supervision of three diverse Chicago organizations—Elastic Arts, Homeroom and Spudnik Press—this fourth iteration of Ten x Ten has grown into four events over the next eight months hosted at several venues: Spudnik Press Cooperative, Constellation and Elastic Arts. It’s a definite scaling up from past years, which consisted of only one event. With Elastic Arts Foundation as guest curators—which includes saxophonist Dave Rempis and composer Paul Giallorenzo—the 2015 project highlights jazz and probes how artists working across different media interpret improvisation. The series organizers musician and visual artist Jordan Martins with bassoonist and composer Katherine Young will start this cycle’s inaugural event with a free lecture addressing improvisation and the use of visual symbols outside the boundaries of traditional music notation. About the project, Martins writes on his personal website, “I‘m pleased to be participating in this event, which is a partnership with some of my favorite Chicago powerhouses.”

For this year’s iteration of Ten x Ten, Spudnik Press selected ten visual artists to pair with ten musicians invited by Elastic Arts, explains Aaron Rodgers, executive director of Homeroom, a not-for-profit resource for Chicagoans to create new and original arts programming. “In both cases, participants were chosen based on a belief that they would enjoy and thrive in a project that asks them to create art outside of their typical means.” Homeroom serves as Ten x Ten’s fiscal sponsor while also covering the organizational and coordinating aspects of the project, everything from ensuring that all the participants receive what they need to handling the marketing side of this project.

The musicians chosen by Rempis and Giallorenzo will serve as ensembles for one another with ten tracks being composed based on shared themes they have agreed upon with their visual arts partner. During the February 19 working performance held at the venue Constellation, each pair will have ten minutes during which the musician will work with his or her ensemble while a projected live feed will show the accompanying visual artist sketching live or sharing preselected images of work. On March 19 at Elastic Arts, each pair’s configuration will be recorded as fully realized visual and musical ideas. 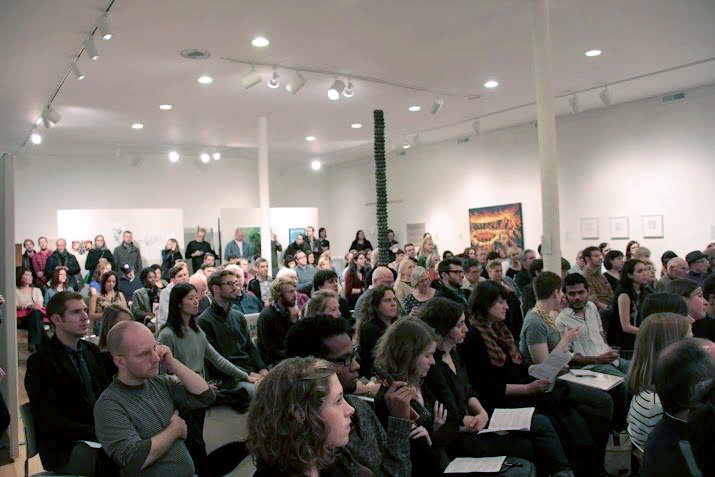 Homeroom curator Colin Palombi, who also works with Spudnik (and is married to Spudnik founder and director Angee Lennard), invites the visual artists to design 18” x 18” serigraph prints in an edition of ten each. A limited edition catalog of the prints will be paired with the vinyl record and distributed as a collectable compilation.

On the successes of interdisciplinary work, Rodgers says, “When it works well, interdisciplinary work can offer insight into the creative process. When form is expanded or constrained, the artists and audiences are challenged to dig deeper into underlying concepts and themes. Asking artists to work with other artists in a different medium requires an exploration of language, working practices, and artistic concepts.” (Mahjabeen Syed)

The Ten x Ten Kick Off Event: Graphic Notation 101 will take place this Sunday, February 8 at Spudnik Press Cooperative, 1821 West Hubbard, free and open to the public. Events on February 19 and September 12 at Constellation, 3111 North Western, require purchased tickets in advance. The recording event on March 19 at Elastic Arts, 3429 West Diversey, will have a suggested $8 donation. Ten x Ten 2015 will be released September 12 at Constellation and will be available online and select retail stores.

Full list of artists and dates of scheduled events.