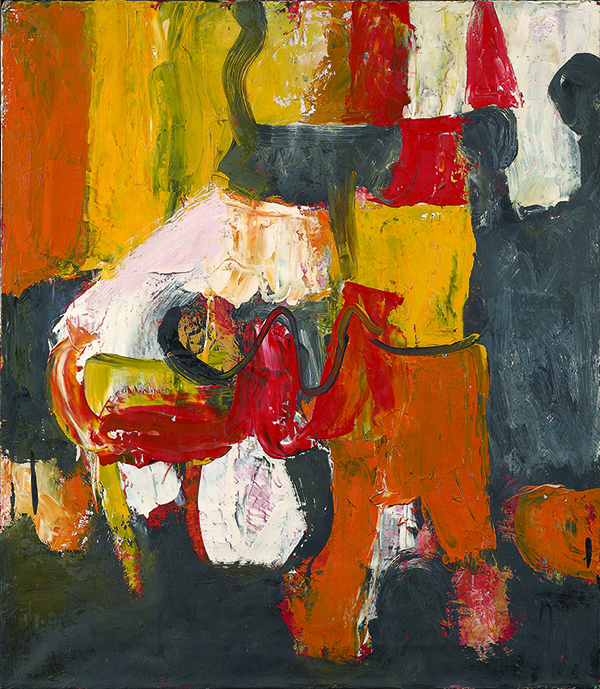 With the work of nine painters from the New York School in the 1950s, Chicago dealer Thomas McCormick has collaborated with several out-of-state dealers to pull together the kind of ambitious show more often found in a major museum. The artists chosen are all women, but their work does not feel traditionally feminine, lacking the gorgeous, fluid colorism of Helen Frankenthaler. Neither does it feel conventionally masculine, lacking the heroic, desperate exhaustion of Joan Mitchell. My favorite piece is a funky conglomeration by Charlotte Park, but it might well be mistaken for the work of her husband, James Brooks, whose work often resembles hers.

What these women have most in common is an emphasis on a tense, defiant gesture of applying pigment—whether by brushing, knifing, flinging or soaking. Restless experimentation was obviously encouraged, and there is appreciable diversity, even among works by the same artist. These paintings are more about dynamic, tumultuous struggle than balanced resolution. They don’t hit you over the head with an authoritative demand for respect, but they do reward attention once you enter them. The facture is rough and tumble, but always attentive to powerful details. These were artists who looked at, admired, and wanted to be recognized as part of art history.

Abstract Expression was often just one phase in these nine careers, several of which ran for more than five decades. American Regionalism shows up in a fine 1945 cityscape drawing by Mary Abbott, while constructivism is suggested by a 1938 collage by Gertrude Greene. Had examples of later work been included, we would have seen Perle Fine pick up Mark Rothko’s Color Field and Janice Biala turn to landscape and still life. Meanwhile the youngest artist here, Lynne Drexler, (born 1928), never really joined the club. Her decorative, quilt-like designs feel more like beautification than defiant self-expression. The intense Ab-Ex bursts of psychic joy or pain may have been a refreshing change from the discredited social idealism and oppressive realities of the previous two decades. But painting can do so much more than just record the spontaneous gestures of well-trained artists so it’s not surprising that Ab-Ex went out of fashion, even for some of these painters. (Chris Miller)