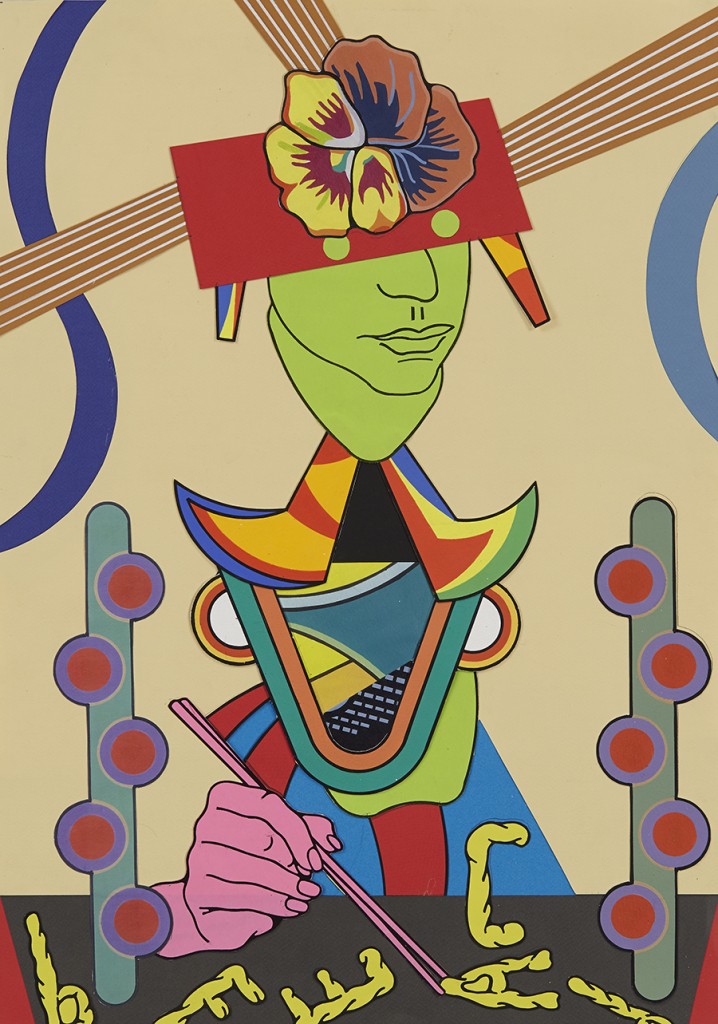 Set in the smart spaces of the Poetry Foundation, this exhibition of the British artist-illustrator Trevor Winkfield (born 1944) highlights his paintings, cover designs and limited-edition books. It’s a small-scale show—five paintings and four vitrines—but the bright, punchy images are themselves like welcome book illustrations against the ashen modernist environment of the still-newish John Ronan building.

Winkfield’s mother read picture books to him as a tot. Afterwards texts always provoked accompanying images from him. Raised in Leeds, he came to America in 1969 and quickly became part of the collaboration-happy New York School. Not “merely a brush for hire,” he said, he had true partnerships with major poets like Ron Padgett and John Ashbery. Collaboration, he reflected, was “one of the quickest ways of allowing me to see myself as others saw me.”

Winkfield’s art is tightly controlled, “as far from spontaneity as one could imagine.” But his precise outlines are heated up by his neon colors; the graphic-design equivalent of Carnaby Street. In his imagery, separate drawings of objects—vases, flowers, moons and faces—overlap into each other’s space. “The Poet,” 2001, is the most ambitious painting here, a large illusionistic field of kooky, incongruous objects. His other paintings are object-portraits of poets, all of which include the tools of writing—pens, desks, books—and which exude a kind of Jim Nutt zaniness. The book covers and limited-edition books laid out here represent the graphic work for which Winkfield is rightly renowned. His cover for Charles North’s “What It Is Like” resembles a flashy, art school textbook. A black-and-white design for John Ashbery’s “Novel” displays a handsome anarchy. Like so much British art, Winkfield demonstrates an unerring sense of taste and judgment, possessing the boldness to go up to a certain line without crossing it. The bright tie matched with the pinstriped suit.

It may not occur to art lovers to visit the Poetry Foundation to see important visual works. But for creatives like Winkfield, pairing images with texts, designed covers with books, and painting with poetry is simply what one does. (Mark Pohlad)

Through March 13 at the Poetry Foundation, 61 West Superior.