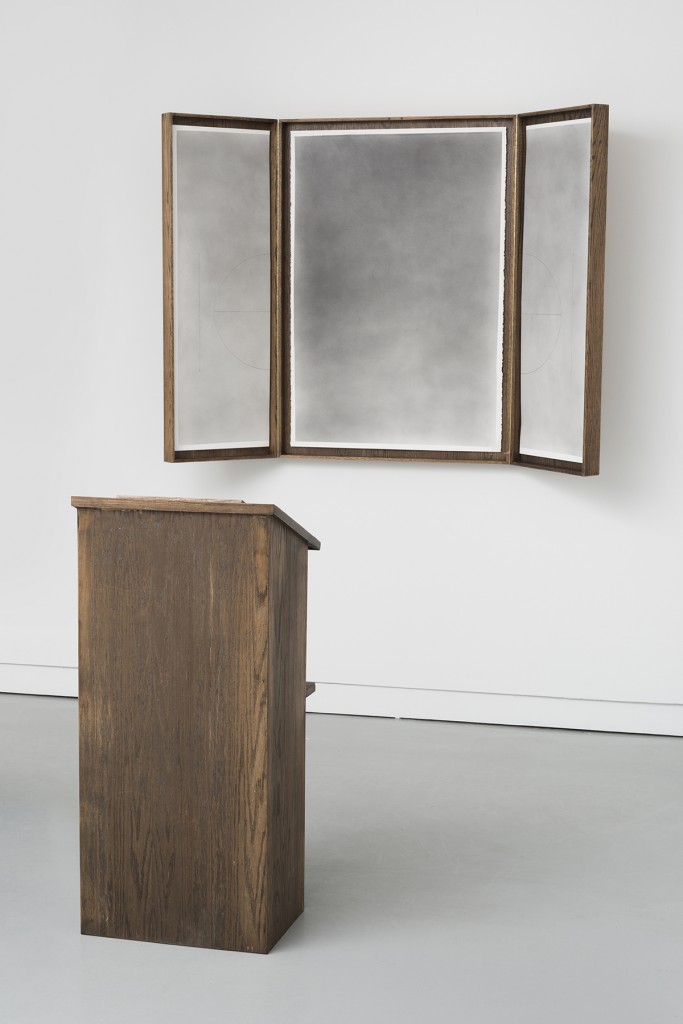 Is art that appears to be “about art” ever only limited to that scope of investigation? I’d say it’s doubtful, mostly because mechanisms of power reproduce themselves throughout social institutions, so to reflect upon the constitutive components of an artistic medium (as well as its historical and contemporary contexts) possesses at least the potential of a transferrable method by which one might fashion new freedoms—not through a rebellion from upheld traditional forms but through critical relationships to them. The monochrome continues to do this. Distilled to an uninterrupted plane, color, texture, scale and the tools for applying material (all usually in some way present in most artworks) are amplified, inviting investigation into the parts that comprise the art. In the best of cases, consideration of the conditions of display is inspired as well. The monochrome as a form also holds up under projections: historically used for such diverse conceptual conceits as Suprematism, color field painting, the “radical painting group,” and most recently one of several working modes bizarrely attributed by Ken Johnson to “soccer mom” aesthetics. A century after Kazimir Malevich painted his canvas “Black Square” in 1915, artists continue figuring out how to take apart the language of art-making so that the parsed vocabulary can speak to the power of the entire system. 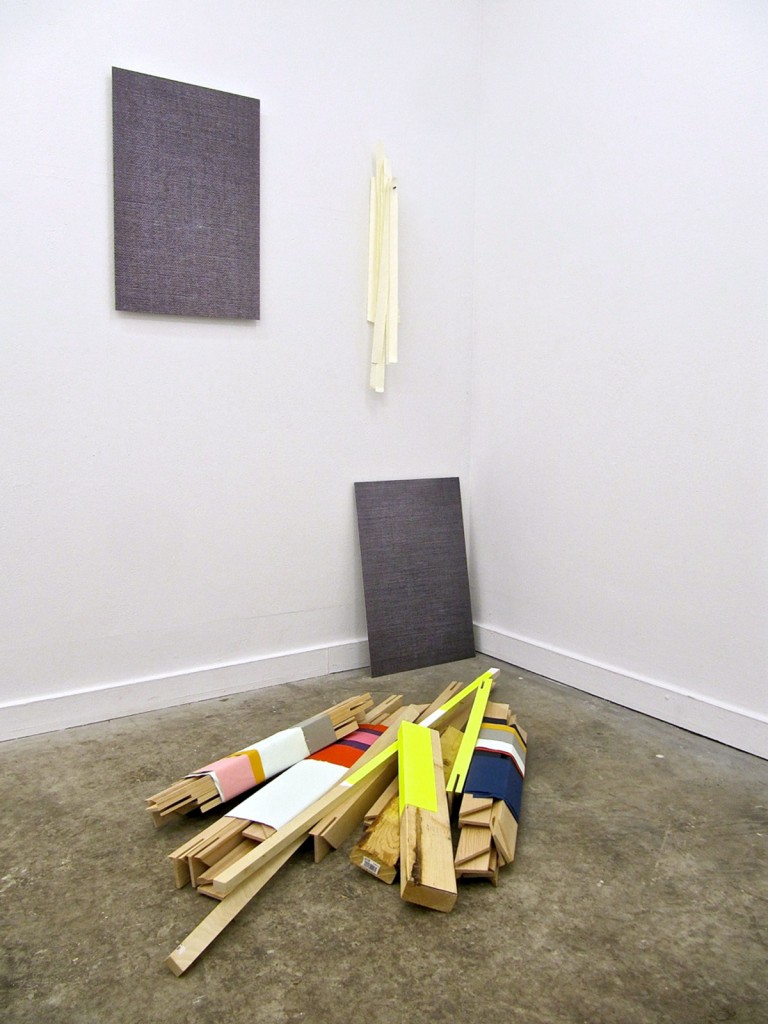 At the Suburban in Oak Park, Victoria Munro and Russell Maltz have arranged an uncluttered installation that understands the medium of painting heuristically—a learning-through-doing about wood and canvas, color and form. Munro’s coy simulations of the parts of paintings look closely while also distancing maker and viewer through the mediation of other means of production, as she does in “Some Beautiful Plans,” photographic enlargements of the weave of unprimed linen. Elsewhere, Munro’s “Stretcher” and “Or, the Whale” are reproductions of a small stretcher bar and a moon-white monochrome canvas in porcelain, signaling to an old hierarchy of painting-as-art and ceramics-as-craft with her ceramics-as-painting.

Photographs by Maltz of outdoor installations of yellow cinderblocks (presumably taken at “Sunbeam,” a 2006 artwork staged in Sarasota) hearken back to the Suburban’s recent paint job on the gallery’s cinderblock exterior in what co-director Brad Killam remembers as “Sunbeam Yellow.” The two artists’ “Collapsed Paintings & Floor Stack,” lays in repose, meditating on past use and future potential with scraps of colored canvas wrapped around unassembled stretchers. 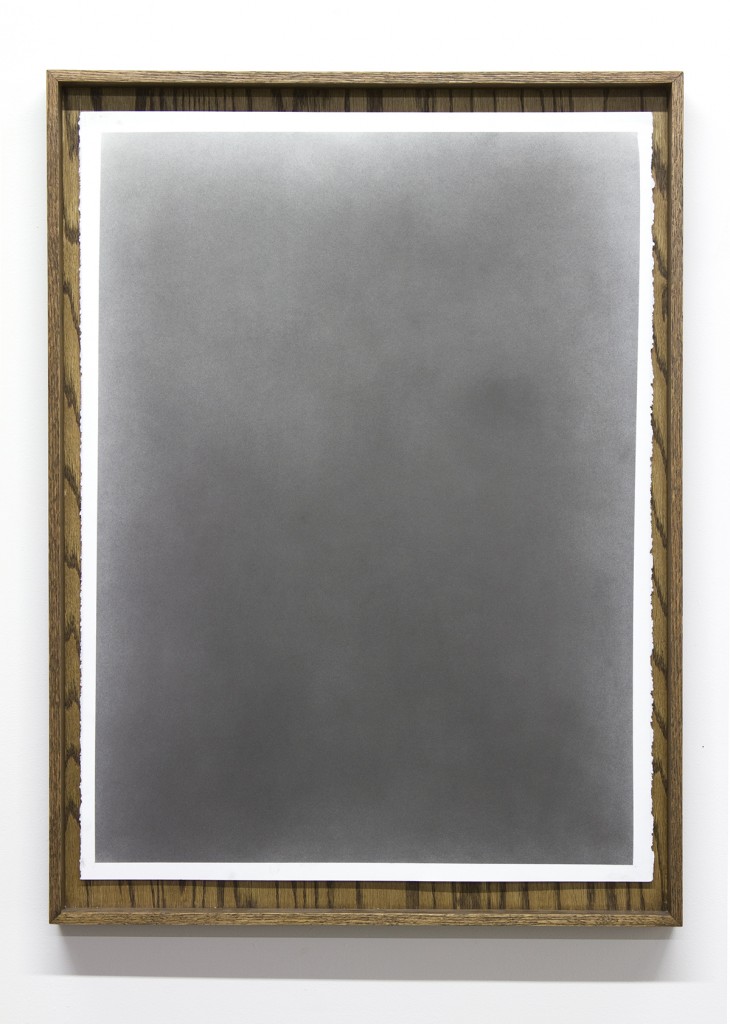 Nate Young’s superlative installation of oak frames and graphite works on paper at Monique Meloche attach his deconstructive moves in drawing and display to inquiries variously semiotic and transcendental. Young’s press release and penciled symbology quote linguist Ferdinand de Saussure (as well as his theologian father), but Foucault’s attention to the production of subjects through a cultural apparatus also haunts Young’s emphasis on the multi-compartmentalized wooden frames that contain his smudgy, atmospheric graphite fields. In his “Untitled Diagram” and “Untitled (Altar)” works, Young favors openness over strict interpretation, yet the pulpit standing at one end of the gallery serves to remind viewers of the rhetorical positions of authority (in galleries, churches, lecture halls and families) by which manipulations of material and language are put forward and enforced. 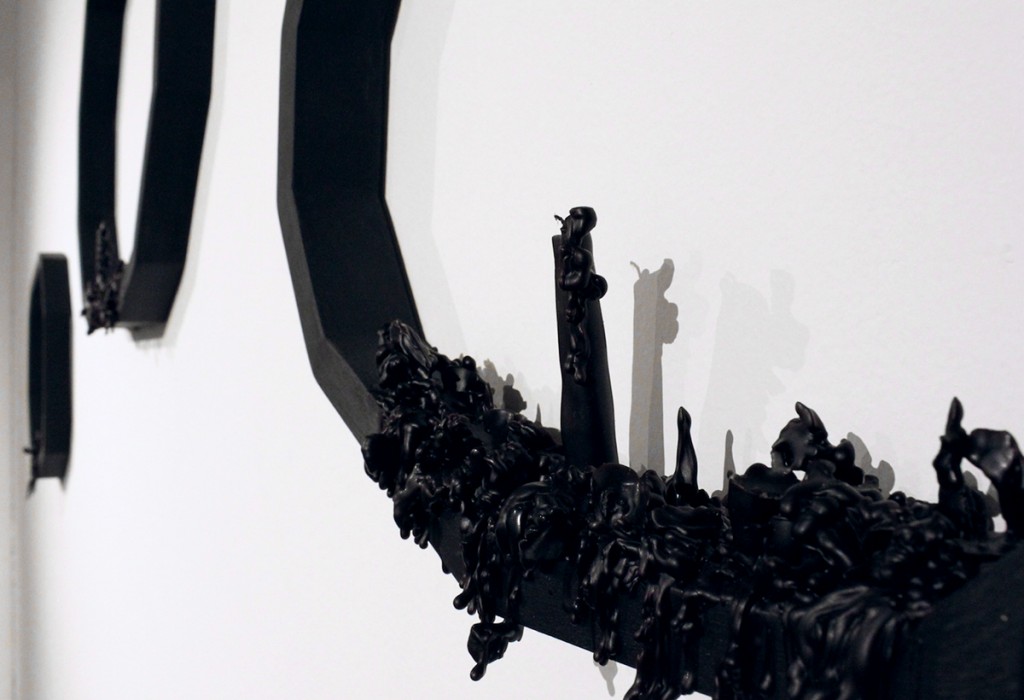 If Munro, Maltz and Young reflexively dissect artistic mediums and the means of display by which we apprehend them, Soo Shin and Liz McCarthy’s exhibition “The Height Below” at Heaven Gallery bring two practices into close assemblage. At times kinky, prayerful (and occasionally oddly canine), the two artists have rendered an exhibition predominately in shades of black, echoing formal vocabularies from one another’s practices. The titular artwork by Shin is a makeshift gallows of black leather leashes. Elsewhere, McCarthy’s “Calendars (Altars)” is comprised of charcoal-painted wooden hoops with burned-down black candles piled along their bottom curves. Shin’s two untitled oil canvases are striped in unfussy renderings of black bars (horizontal and radial, respectively) that pick up on the stacked and looped compositions in McCarthy’s installations elsewhere in the space. Heaven Gallery has rarely looked as good as it does inhabited by this installation of dark objects, offset by a white work by each artist hung close enough together to read as a diptych. If other monochromes disassemble the mediums in which they are crafted, Shin and McCarthy call into question the discrete character of an artwork’s author. 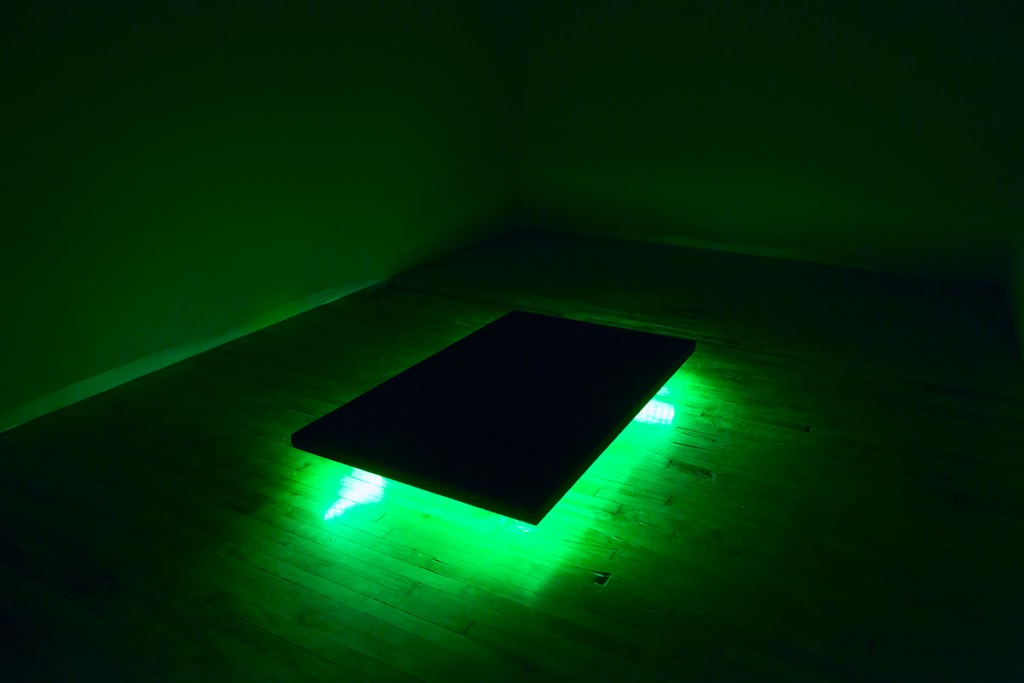 In Latham Zearfoss’ installation at Threewalls, a black rectangle not unlike Malevich’s hovers inches above the floor in the darkened project room. Gradually, pulses of verdant green light flash out from under it, keeping time with pronouncements of “YES” playing through a sound system. If your vitality for the new year is in need of recharging, this is the room where you should be hanging out. As a chorus of yesses builds in emphasis and frequency to an orgasmic crescendo, emerald light strobes into as rich a monochromatic atmosphere as those suggested in Nate Young’s drawings. Here is a gesture of consolidation that gives color to a syntax of affirmation—a manual synesthesia that swirls together visuals and sound. Through inflection, Zearfoss strings together different meanings: pleasurable, hopeful, validating, triumphant and, most interesting to discern in the mix, the yes of consent much talked about in sex-positive, inclusive social settings like the organization Chances Dances which Zearfoss helps operate. 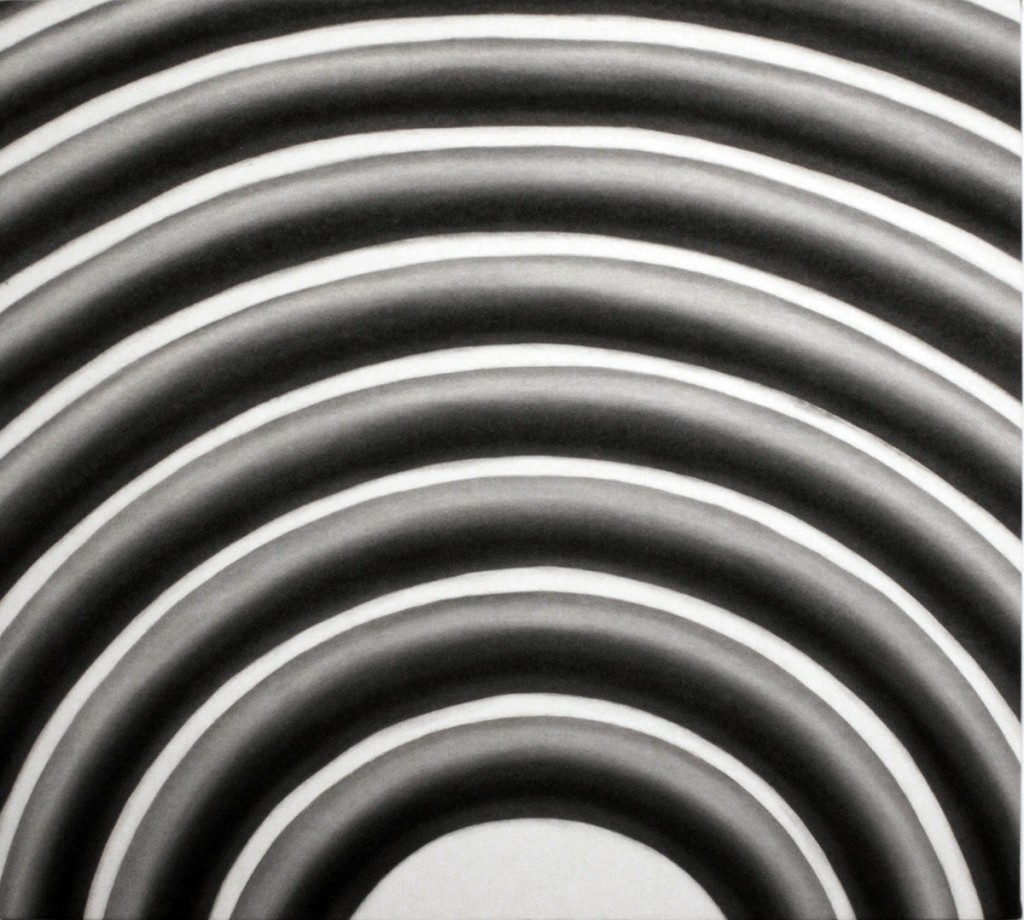 I for one say “yes” to the ways that the monochrome looks back at us, confronting us with what we’ve tried to apply to it—the aforementioned, often politically motivated art movements or the more generic tabula rasa meditations into which they are often figured by viewers. Seemingly simplistic maneuvers such as these suddenly remark on the past, present and future of their medium and its reception; they trouble the expressiveness of individual authors and underscore positions of authority that empower and suppress meaning; they set the mood for a collective response to variously registered current circumstances, questioning to what we comply or agree. Monochromes recur in the culture of “conceptual abstraction” that has been fostered in Chicago for decades, so many happy returns to one of my favorite art forms.