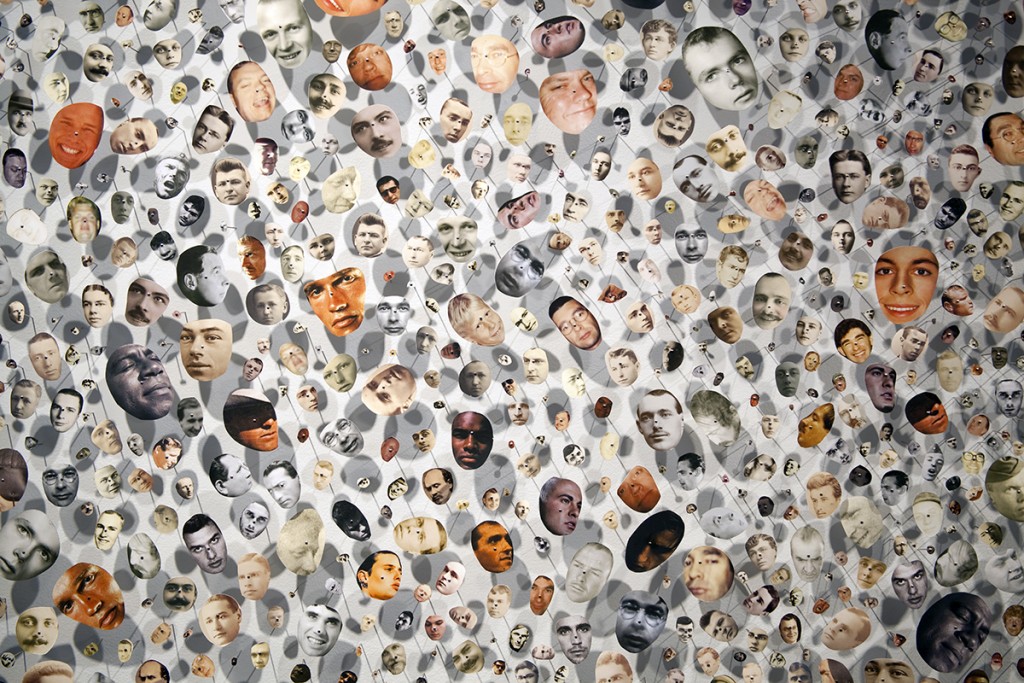 Among the four wildly diverse approaches to representing the human body photographically on display here, Heather Dewey-Hagborg’s is the most inventive, although not the most meaningful. Dewey-Hagborg picks up cigarette butts and discarded chewing gum off the city sidewalks (depicted in her color shots), subjects the detritus to DNA analysis, runs the genetic profiles through a facial algorithm, and produces 3D resin portraits that presumably resemble the people who left the remains of their consumption for the scavenger-artist to appropriate (the droppings also grace her mini-installation). The three particular subjects whose faces look out at us from the gallery wall are all young, attractive and relentlessly clean, with an airbrushed appearance that belies the butts and gum from which they have been reconstructed.

Also innovative, but with more meaning to ponder, are the team of Garth and Pierre’s two photo-works of clouds of appropriated photos of countless male faces that have been cut out of their frames and pinned to the gallery walls to form dense circles. Although all of the disembodied faces are relatively small, a closer inspection shows that they comprise a motley jumble of various sizes, arrayed at different angles, with subjects from different eras and of different ages and ethnicities—a veritable perfect storm of masculine diversity. There is no rhyme or reason that is apparent in the artists’ selection of the images or their disposition, which is just the point; to contemplate such a heap of variegated humanity effectively dispels any pretension to gender purity, which dissolves into an eye-popping phantasmagoria. The other two photographers in the show, Tara Bogart and Jess Dugan, provide a counterpoint to the two striking experiments, each offering sensitive straight posed color portraits: Bogart of women taken from behind with a focus on their slightly loose and tousled hair, and Dugan of denizens of the queer world, tough and sweet. (Michael Weinstein)