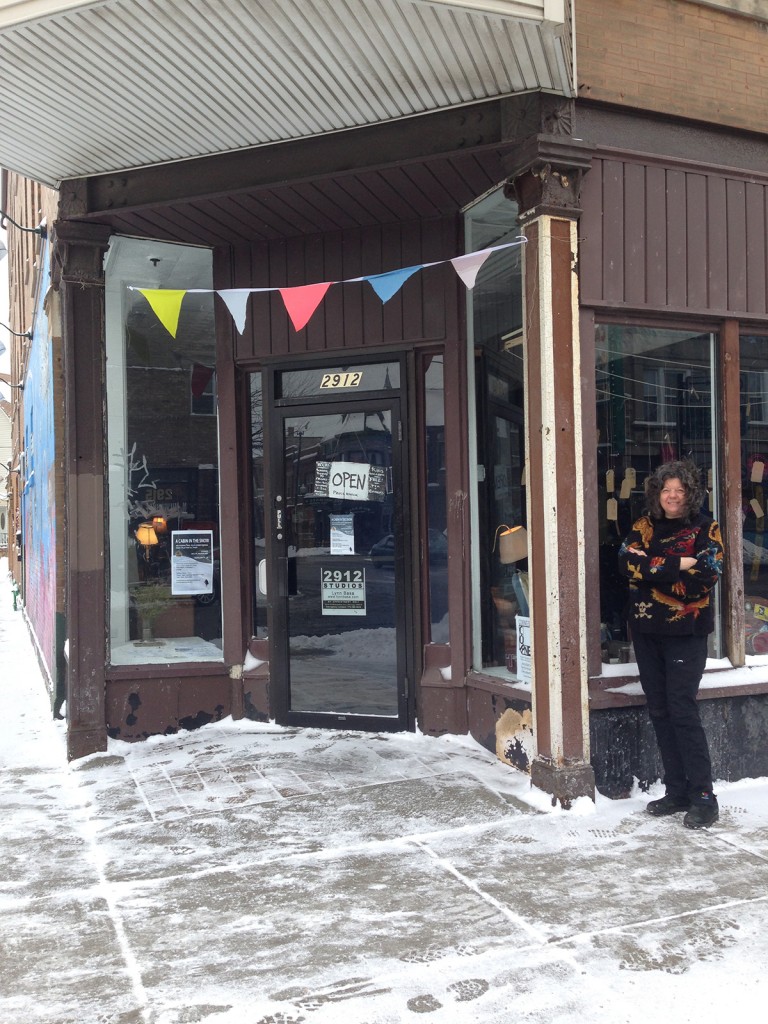 Painter and School of the Art Institute of Chicago MFA candidate Lynn Basa has opened Corner, a new art gallery in the Avondale neighborhood located at 2912 North Milwaukee. Basa has owned the building at the corner of Drake and Milwaukee since 2008 where her studio also resides. Because she can only work on one painting at a time, Basa wanted to make use of the remaining 400-square-foot space by doing something she found meaningful. We met for an interview in which she says, “I just felt like I could bring more value to my life by creating a connection with the community. Studio work is notoriously isolating and so I wanted to not only start connecting with other artists, but also experiment because I feel like the whole language of gallery space is to keep people out and I started thinking about how this very building was designed to bring people in.”

The foundation of Corner is influenced by the very history of the building. In 2014, Basa was the guest curator for A Day in Avondale, a one-day event produced by the Avondale Neighborhood Association. There she, along with Voice of the City collaborators Alva Nelms and Christopher Ellis, created Story Attic, an installation about the history of the 2912 building first as an immigrant’s Polish sausage shop in 1905, then as a bridal boutique owned by a Mexican seamstress in 1963. After having created this exhibition, they had a real cross-section of the neighborhood and Basa hopes to continue that while also using the space as her thesis project.

Corner’s inaugural exhibition opened on February 7 with an installation/performance titled “A Cabin in the Snow,” an interactive story told through a series of mechanical suitcases that have been created by Will Bishop and Grace Needlman. Unlike conventional “no-touch” art galleries, the “Cabin” installation encourages visitors to pull levers and turn cranks in order for them to wholly immerse themselves into the splendor of their story and exhibition. Puppeteers Antora Delong and Lara Vanderheiden performed the story with live music accompaniment by James Fleming.

Corner is inspired by the writings of John Dewey and based on his philosophies; Basa wants to give free reign to all the artists, even allowing them to change the color on the walls in the gallery itself or even building a wall as Bishop did for “A Cabin in the Snow.” “I would like this to be a hangout space too,” stresses Basa. “Like if there are small artist groups that want to come in and have a little meeting here or just to have a space to sit down and talk. I’d really like to activate this space as many hours as possible.” She also advocates that all artists should be paid for their work and so she solely funds the projects and artists that come to Corner.

Even though Corner has hardly been open for a month, Basa already has a stellar lineup of future artists: Philip Hartigan will be showcasing a stop-motion exhibition on the history of coal, opening on April 3; then it will be Betsy Zacsek with an installation; followed by Stephen Flemister, who will be exhibiting sculptures constructed out of cardboard with an African-American-themed story surrounding them. Lastly, Basa and collaborators of Voice of the City will tell the origins of Christmas through baking cookies. According to Basa’s research, Christmas has a dark side, even involving human sacrifice, and to present that, they will be baking gingerbread men cookies that look like people and viewers of the exhibition will eat the cookies which will essentially represent human sacrifice, again, activating the space and exhibition as well. On her major thoughts about Corner, she says, “A part of the subtext here is that all the artwork and the exhibits have to relate somehow to the human experience that people can understand and it will be by, for and about the people that are here, which is a very broad spectrum of experiences.” (Mahjabeen Syed)

The installation “A Cabin in the Snow” has been extended until March 14 due to further interest. However, the final performance (consisting of the puppeteers and music) for the show will be this Friday, February 27, from 6pm to 9pm. Performances are fifteen minutes long and will occur every thirty minutes starting at 6pm.