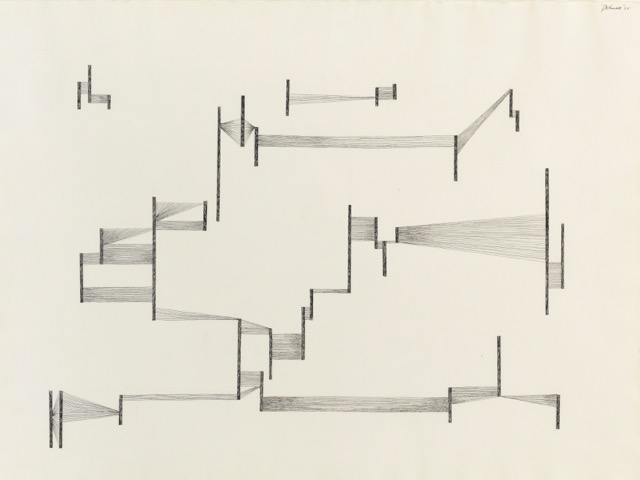 Dehner’s training in the twenties took her from Cleveland to both coasts, and included several renowned teachers. With her artist spouse, she was a fixture in the upstate New York art colony of Bolton Landing. After her divorce in the fifties, Dehner moved to Manhattan, where she remained for the rest of her long life. She suffered staggering losses. Her parents and only sister died by the time she was eighteen. A second husband died in 1974. The wrong prescription rendered her blind shortly before her death in a stairwell in 1994. 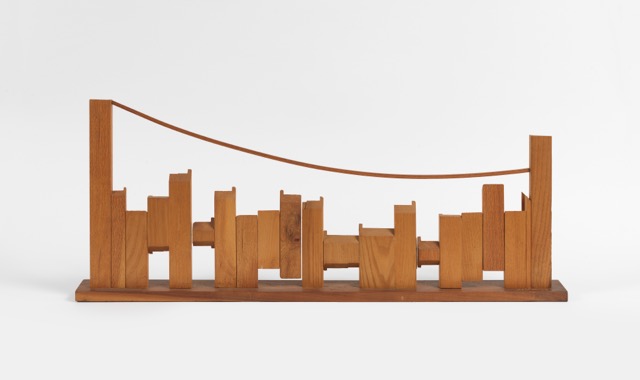 Dehner was that rare artist equally adept in two and three dimensions—in printmaking, drawing, painting—and in sculpture, but she only found her voice late. Her first solo show wasn’t until 1950, and her first sculpture five years later, at age fifty-four. “I was never taught sculpture at all,” Dehner once claimed. “The minute I had [the material] in my hands, I knew what to do.” The wooden sculptures here alternate between stacked constructions, and more horizontal formats. “The Ball (Ball in a Landscape)” exhibits something of the stage-like, Surrealist feel of Dehner’s earliest pieces. “The City to the Bridge,” is a skyline underneath the simple swooping form of a bridge. Altogether, Dehner’s sculpture might be seen as part of a twentieth-century tradition of women sculptors—including Hepworth, Nevelson, Marisol and others—who worked in wood.

Despite the abstract geometric vocabulary, her art is intuitive. There are quirky details to watch for—a backward signature, subtle changes in stain and tone, and barely visible dowels connecting wooden blocks. The thin, splintery spaces between wooden or drawn forms comprise a unique language. Dehner’s ink-on-paper drawings need to be experienced in person. They’re made up of dense networks of lines, faint zones, and sometimes thin bands of color. “Drawing with Green Ink, #3,” circa 1971, is flat-out gorgeous.

These works, despite their origins in the seventies, are genuine mid-century gems. And compared to the sensationalist, politics-saturated art of our own time, there is a wisdom and warmth about Dehner’s art—like carefully chosen words spoken in low tones. (Mark Pohlad)