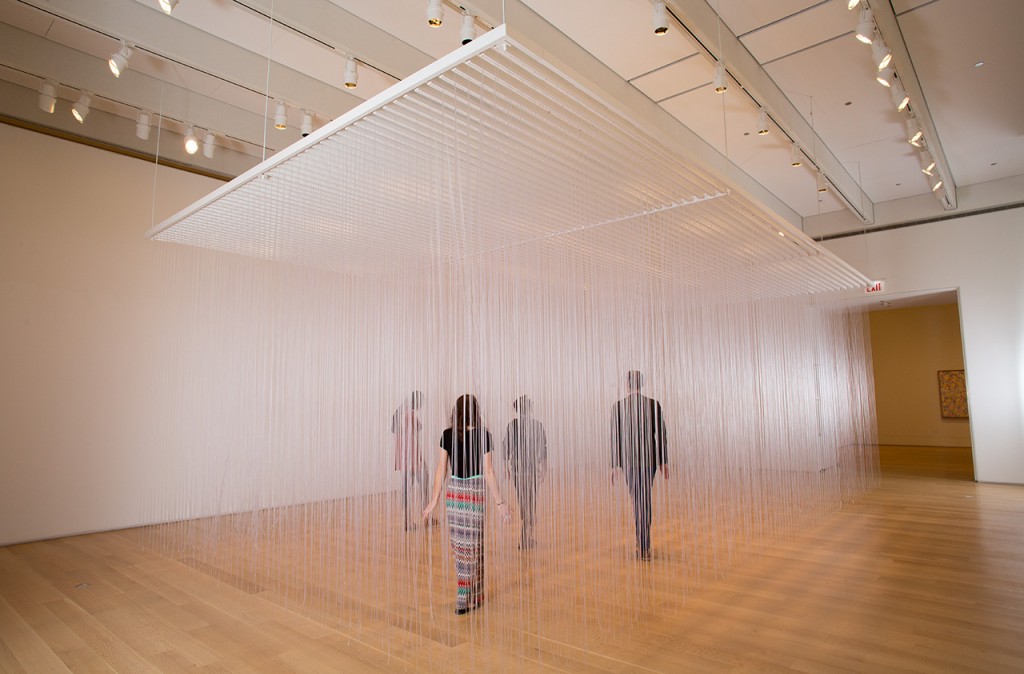 Friends of mine are used to me bristling against the word “normal,” and many of the art students I teach have opted to avoid it lest they elicit a mini-lecture that questions the production of normalcy as an underlying societal force. At issue is how normative conceptions of being come about in relation to what is deemed abnormal: this could be queer, minority or, as I’m considering here, the production of the category of disability. 2015 marks the twenty-fifth anniversary of the Americans with Disabilities Act (ADA), leaving me with questions of what the art world has done over these decades to not only comply with government-mandated civil rights law but to actively imagine modes of engagement that appreciate differently abled bodies and minds of both art audiences and artists as an opportunity to create new forms of meaningful experience.

In his 2011 essay “Beautiful Progress to Nowhere,” Chicago-based artist, writer and educator Joseph Grigely wonders, “…The arts need disabled people; but it’s not clear what exactly defines this need. Is it because difference is ‘good’? Or is it because the experience disables those who interact with us, thereby rewriting the tacit rules by which we share space together?”

Perhaps innovations in how art can be a place of interaction for low and non-sighted individuals, those who are deaf, people with special needs for mobility and other perhaps difficult to predict differences in bodies stresses the incommensurability of shared experiences in art: it’s not the same for any of us, no matter what shared abilities we might have. I spoke with Dr. Carrie Sandahl, head of the Program on Disability Art, Culture, and Humanities at UIC, “Everybody can get some experience of the artwork with their own history and apparatus, but it doesn’t have to match. Why do we think that it’s ever going to match? Audiences are going to bring different things.”

One of the first major projects that the Art Institute of Chicago (AIC) undertook after the ADA was written into law was to open its Elizabeth Morse Touch Gallery, which debuted in 2000 with five sculptural busts, down to four since its relocation just inside the Modern Wing entrance in 2009. The sculptures—rendered variously in stone or metal—are treated with a protective layer of wax to assure safe conservation of the selected works. Lucas Livingston, the Institute’s assistant director of senior programs, met with me at the Touch Gallery to talk about the museum’s various outreach initiatives, emphasizing the importance in their conception of this project that it was treated as a cohesive exhibition of portraiture comprised of accessioned works from the permanent collection. Three busts are Western works from the nineteenth and twentieth centuries, joined by an ancient Chinese sculpture from the Tang Dynasty, 600-900 C.E.; I can’t say any are by artists with whom I was previously familiar. 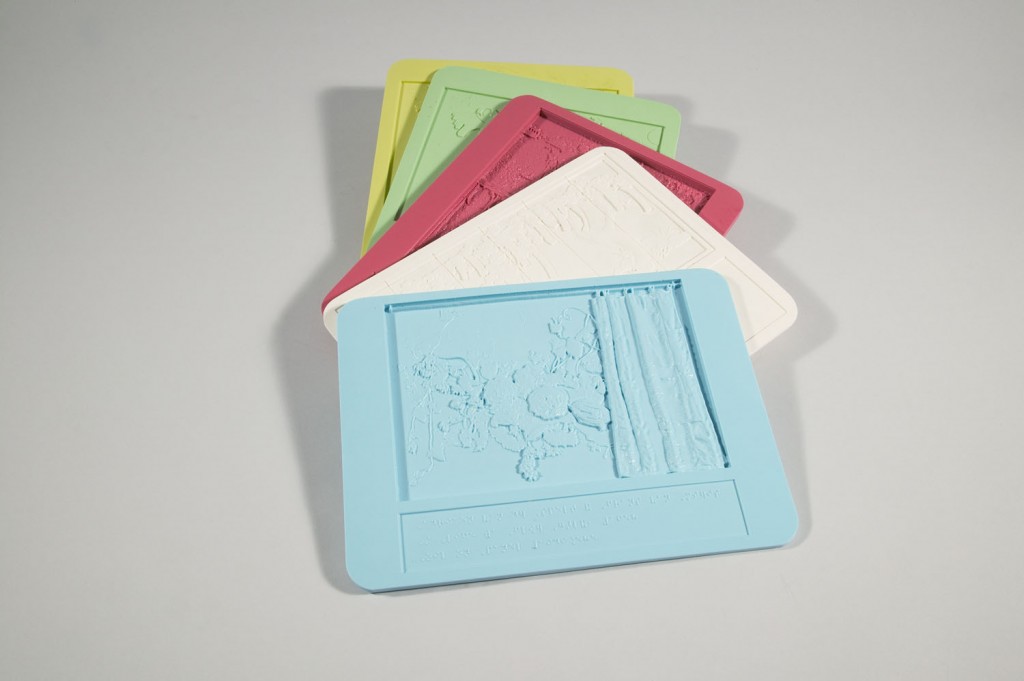 The Art Institute’s TacTiles, developed by the Department of Museum Education and Helen Maria Nugent, associate professor at the School of the Art Institute of Chicago

While the Touch Gallery is an encouraging step in realizing haptic potential for art experiences, I‘m left questioning how the small number of personages in the long-term installation might neglect the profound ways that the bodily has been interpreted by artists, and the ways that the group of busts might constitute a narrow conception of embodiment with subtly normalizing effects. What if this gallery underwent rotation? How would notions of bodies be radicalized if viewers were invited to touch, say, one of several Brancusi holdings?

In another project by Grigely, in which he takes conceptualist Sophie Calle to task for the ways in which she incorporated interviews with blind subjects into her exhibition “Les Aveugles,” he writes: “History is filled with examples of desire to relate to the other in some configuration: to experience the other, possess it, control it. It is, almost ironically, a way of learning more about ourselves, of seeing how we fit into the grand scheme of being—the endless taxonomy of differences that we are forever trying to map, order and organize into convenient compartments of knowledge… And it is not always quite the gesture of disinterested benevolence that it seems to be.”

If the Touch Gallery feels a little institutionally neglected, Livingston has worked in recent years to develop other compelling tools with which to share the museum’s permanent collection. In 2006, the Institute created a sets of TacTiles, a series of handheld plastic tablets into which representations of five major works from the collection have been laser-etched into shallow relief: a Renoir, Adriaen van der Spelt and Frans van Mieris’ 1658 “Still Life with a Flower Garland and a Curtain,” a Japanese screen by Tosa Mitsuoki from 1675, the 1503 “Aztec Coronation Stone of Motecuhzoma II” and Joan Miró’s “Personages with Star,” 1933. It’s a brilliant selection of works that draw from across the globe and throughout history, with sensitive attention to how qualities in each piece might be interestingly translated into touchable texture, such as how the TacTile actually imitates the carving techniques used on the Aztec stone. The abstract Miró painting particularly satisfies my interest in including art that opens explorations of form wider than traditional figuration, thereby exciting a space in which the bodies of museum visitors needn’t comply with norms tacitly privileged in more representational works.

In 2014, AIC received a grant from the Institute of Museum and Library Services to incorporate 3D printing into various educational programs. One result is the “Hands on with 3D Printing” initiative in which half a dozen or so objects in the museum’s collection have been intricately scanned and reproduced in 3D printed plastic at a one-to-one scale. The response has been overwhelmingly positive, says Livingston, as I was handed a plastic replica of the Greek “Rhyton (Drinking Vessel) in Shape of Sheep’s Head” from 340-330 B.C. These replicas are being used in various free tours available, including “Art in the Moment,” a sort of phenomenological treatment of the museum collection for visitors with various forms of dementia.

Many contemporary artworks made by artists with or without disabilities destabilize a singular focus on visual experience in favor of increasingly multi-sensorial means of encountering the work; Jesús Rafael Soto’s recently restored “Pénétrable de Chicago,” for instance, welcomes AIC audiences to wander through thousands of transparent filaments hanging from the ceiling (and continues on view through March 8). Supplementing works like these with projects like the TacTiles and 3D printed replicas of art and artifacts goes some ways at ideating the productive futures that Dr. Sandahl offered for arts and disability moving forward, “We need art forms that are based on our experiences and our bodies”—and her “our” here seems a broadly inclusive group—“I think that the hidden ableism in here is the assumption that the only thing that we, disabled people, are good for, is to have experiences that normal people have. That that’s even what we want. When what would be more interesting would be to turn the question around. People with disabilities—our bodies, our minds, our senses—are generative. Our experiences are generative of new aesthetics, of new possibilities, new forms of spectatorship, different ways of forming community, different ways audiences interact. That is what you’re going to get once disabled people are really infused. Just a lot more of everything.”