It’s hard to believe that just over seventy years ago Henri Matisse was something of a has-been. Considered by many to be little more than a thoughtful, polite decorator of bourgeoisie interiors, his radical stature long eclipsed by that other giant of twentieth century art. While in 2015 one might plausibly forget that Picasso ever existed, so little is his impact seen and felt in contemporary painting, the influence of Matisse is now inescapable. From massively attended retrospectives of his late work, to artists (like John McAllister) who have made whole careers out of unabashedly aping his look, Matisse might well be regarded as the single most prominent influence of our time.

Enter LA-based artist Ryan Fenchel whose new exhibition titled “Fases and Vaces I’ve Been” at Carrie Secrist treads comfortably, but not always predictably, within the circumscribed limits of the French master’s shadow.

Rich with saturated colors, flat shapes and harmonious compositions, one never gets the sensation that the bold arrangements in “Fases” were much struggled over. Aside from some errant pentimenti on the awkward “Edo, Khem” and what might be a covered-over image in “Profe Loop,” most of these works seem to have come about with relative ease. 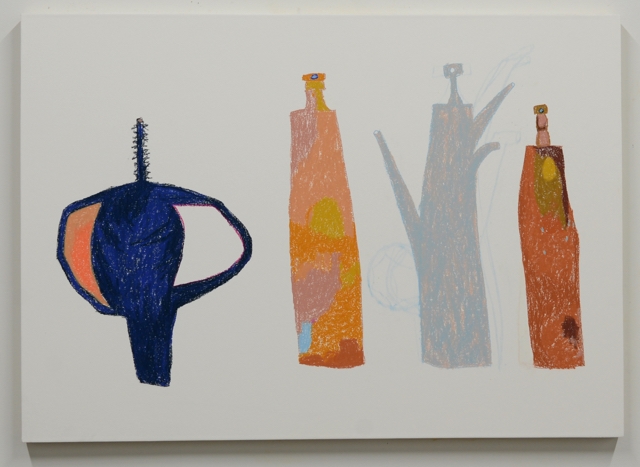 It’s the pieces that “shouldn’t work” like the visually top-heavy “Hand Snakes, Tray” whose brilliant orange square hovers menacingly atop a navy blue field, or the vessels’ strange gyrations in “Edo, Khem,” that try to stake out unfamiliar visual territory and inspire the most sustained interest.

Owing to the preponderance of soft pastel, there’s an almost universally matte, near velvet, quality to these nineteen works that is seductive and intimate. Unlike paint which is so frequently mediated by brush, the directness of pastel’s touch allows the viewer rare access to the artist’s hand.

“Fases and Vaces I’ve Been” is a thoroughly likable exhibition that demands very little from the viewer in return for its good-natured visual gratification. I was left wondering, however, at what point the legacy of Matisse, whose influence is so productive to so many artists, will seem more like a burden, from whose weight we struggle to escape. (Alan Pocaro)