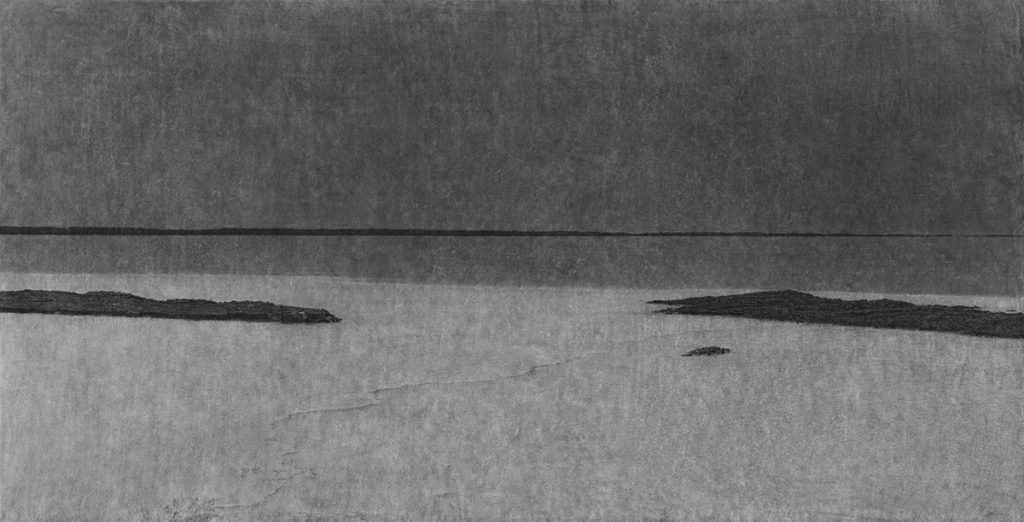 Printing her large-format black-and-white landscape photographs on Korean rice paper, on which she has meticulously and elegantly brushed photographic emulsion, and then made digital prints of the images, Jungjin Lee produces haunting and faded yet distinct impressions of the deserts of Israel and the West Bank of Palestine in her “Unnamed Roads” series. There is not a hint of the political conflict that wracks the region in Lee’s work. Indeed, she has removed as much context as possible from her images by naming each one with only the exhibition’s title, although they sometimes depict cities, ruins and distinctive rock formations. Lee’s point is that current events are merely rippling sand swirls on the surface of an immovable human condition, in which past contingencies leave their marks that are subsumed under persistent particularized forms that she captures with her view camera.

It is not too much to say that Lee’s images have far less to do with the Holy Land or the contemporary political entities into which it is divided than with perennial human existence anywhere; her photography, she says, is about “the solitary state of being human.” Except for one image in which a man shot from behind walks toward the horizon on a rocky embankment, all the rest are void of human figures, leaving the viewer to commune with each scene alone. Lee intends us to place ourselves in the position of the solitary walker in her image, which is the first one we see, facing us when we walk into the gallery. From that position, as we look around us, we find ourselves surrounded by dreamlike fragments, each exquisitely composed. The most moving of them depict flattened-out natural features, such as weathered tree trunks lying on the sand, facing each other, against a charcoal-gray sky, obdurate and seemingly implacable. The desert is forbidding yet not at all threatening, alien in the sense that the land is vast and does not belong to us, representing a temporality so long in duration that it cannot help but be indifferent to us. Lee offers snippets of the sublime. (Michael Weinstein)