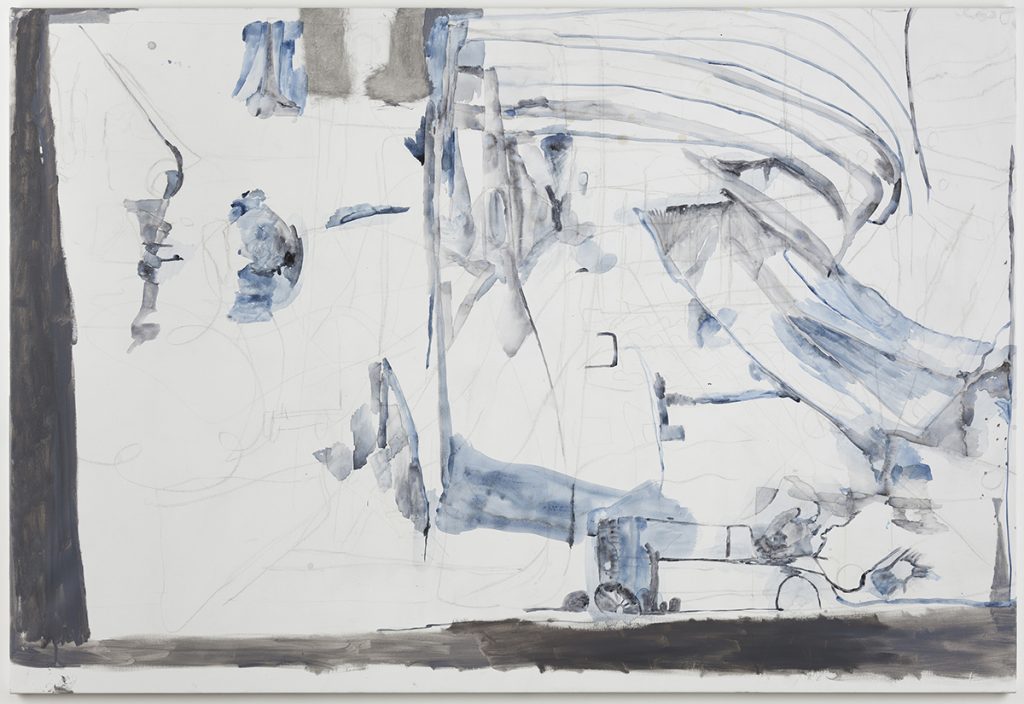 The seven blue-gray and gray-brown paintings in Varda Caivano’s “The Density of The Actions” rest easily on the Bergman Gallery’s sunlit walls. All untitled, their meandering charcoal lines and fluid, almost watercolor-like passages of acrylic paint seem fraught and indecisive. There’s a captivating immediacy to the manner in which these skeletal (and only tangentially descriptive) marks play tensely against the vertically elongated format of several of the works, but there’s also a thinness to these paintings that’s difficult to shake.

Unlike much of the artist’s recent work, which usually features highly compressed interlocking shapes, these paintings embrace visual austerity to the extent that much of their surface is left primed but unpainted. As a result, Caivano’s pictures tend to resolve themselves upon a strategy that, problematically, feels like abandonment, as if the artist simply stopped touching the surface. The ambiguous forms, vaguely figurative references and hesitantly applied paint offer the aesthetics of struggle and frustration, appearing to evidence an effort to uncover the “rightness” of shape and composition in relation to the picture’s format, but the stakes of the endeavor are elusive and so the gestures ring hollow.

A clue to this “lessness” can be found in the catalog essay contributed by critic Barry Schwabsky. Taking the form of an imaginary dialogue between Samuel Beckett and Georges Duthuit, the two discuss how even a painting rendered “bereft of occasion,” that is, with “No light, no darkness, no place, no absence of place, and none of the ‘good housekeeping’ of colors, forms, and textures,” remains, as a consequence of still being a painting, teeming with promise. An interesting thought perhaps, but not enough to sustain these works for the long haul. Consumed as rapidly as these paintings appear to have been executed, I, like Beckett’s Vladimir and Estragon, found myself waiting for something that never arrived. (Alan Pocaro)

Through April 19 at The Renaissance Society, 5811 South Ellis.