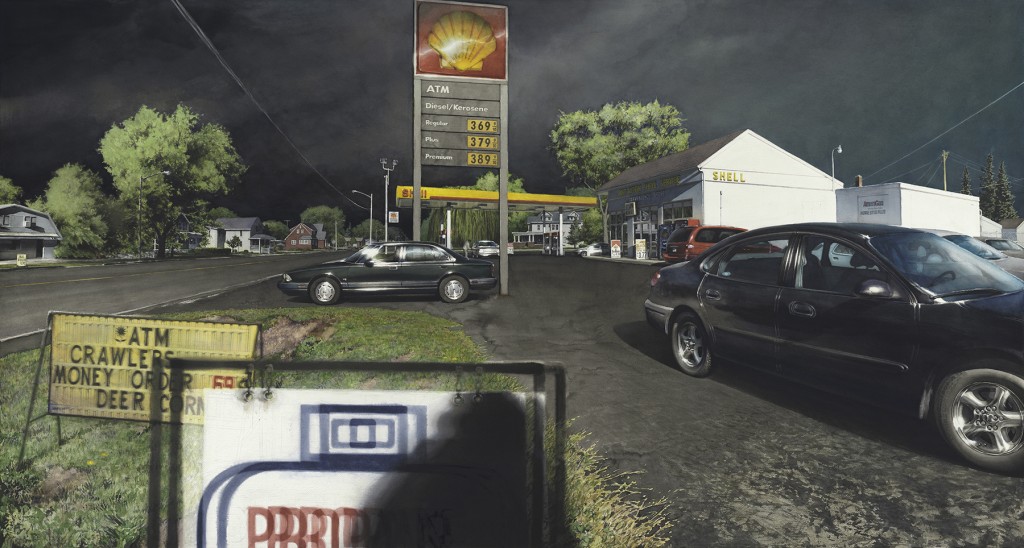 Bill Frederick takes us on a Midwestern road trip. But as in his previous shows, rather than showing us unusual or scenic vistas, we get the ordinary places that are impossible to avoid, like gas stations and strip-mall parking lots. Landscape painting usually offers an escape from the daily grind, where the human footprint, if any, fits smoothly into the natural order of things. But Frederick’s landscapes do not escape the jagged ends of human existence, and no matter how deep into the north woods he drives, he never gets far from the car.

Nor does his highly skilled, photorealist technique escape our omnipresent digital world. Working watercolors over white paper, his images are backlit, feeling just like images on a computer screen. And while hand-made images cannot convey the strictly mechanical, factoid qualities of a photograph, he comes darn close. If anything, his techniques serve to exacerbate rather than ameliorate the limitations of a camera: its tendency to wash out middle tones and lose focus before or beyond a chosen depth. Sharp angles are awkward, areas of color are untuned, and most painfully, figurative shapes are drawn lumpy, not strong.

If failed escape is his intended theme, he has achieved it with a depressing, dystopian triumph. The world can be one hell of an uncomfortable place—just as it also feels to me when, cramped and exhausted after a long drive down the interstate, I stumble out of the car into the glaring light of a filling station. It’s that flash of recognition that makes these pieces memorable, but is it really necessary to see them more than once, or even in person?

One piece, though, “Lightning, Port Austin,” seems to be moving in a more Gothic direction, suggesting a drama of impending violence. The hulking silhouette of the artist himself casts its dark shadow across a blurry road sign in the foreground, suggesting that the mystery is about him more than anyone else, and I can’t stop looking for clues amid the meticulously rendered details. Sudden death puts an exclamation mark at the end of every kind of existence. (Chris Miller)