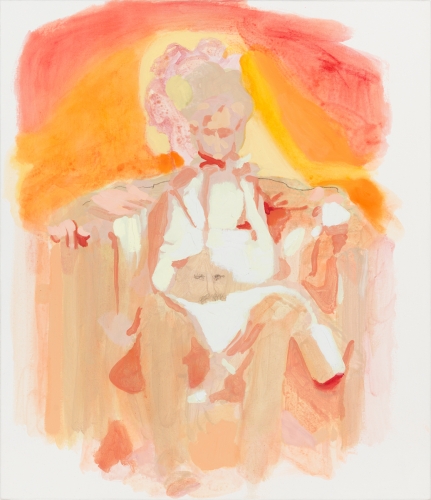 Andreas Fischer’s “The Ghost in Your Shoe” is a satisfying meditation on representation delivered as a set of strange, charming little paintings. The subject matter is familiar. Each picture is of something everyday—a horse, for example, simply titled “Horse.” The paintings are rendered dreamily, as if painted, not even from memory, but from the storehouse of the mind wherein objects are classified. How might a horse appear in the mind’s eye? This is the look of Fischer’s paintings. They spring from an interior space complete with a washy white emptiness around each object, as if the object and only the object were being held aloft and examined in a neutral region, stripped of as much context as possible. We see not renderings but impressions, fleeting notions arrested. 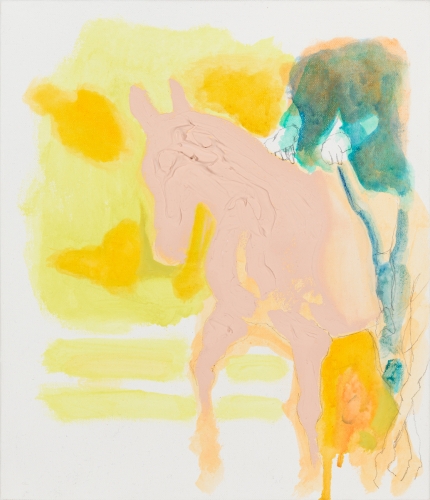 The paintings share a definite visual vocabulary, but do not overwhelm with an artist’s domineering individual vision. Their forms are vague enough that we can project onto them, that we can see where our notions align with the artist’s and where they diverge. And Fischer invites us to do so, as the show’s title suggests. Fischer wants us to stand in the same place, seeing the same thing and a different thing all at once.

The work investigates how we see and remember objects, and in some instances how signs and symbols from other parts of our lives can append to these objects, how our brains tend to glom together seemingly disparate ideas, emotions, etc., forming new connections and hierarchies. In “Monument,” for example, the Lincoln Memorial is rendered in blazing sunset hues. Lincoln’s own facial features are vague. However, eyes, a nose and a moustache peer ominously out from the statue’s belly rendered in stark pencil. Not Lincoln, but a construction of Lincoln including a mystery face, crossed neurons manifest in graphite and pigment.

Fischer arms his work with paint, pencil, semiotics and subterfuge. His paintings are representational, but self-consciously so, amused with themselves for depicting anything at all. They refuse to define anything too clearly and their uncompromising titles beg to be challenged. They are lovely, thoughtful paintings, impressions. (Christopher Backs)