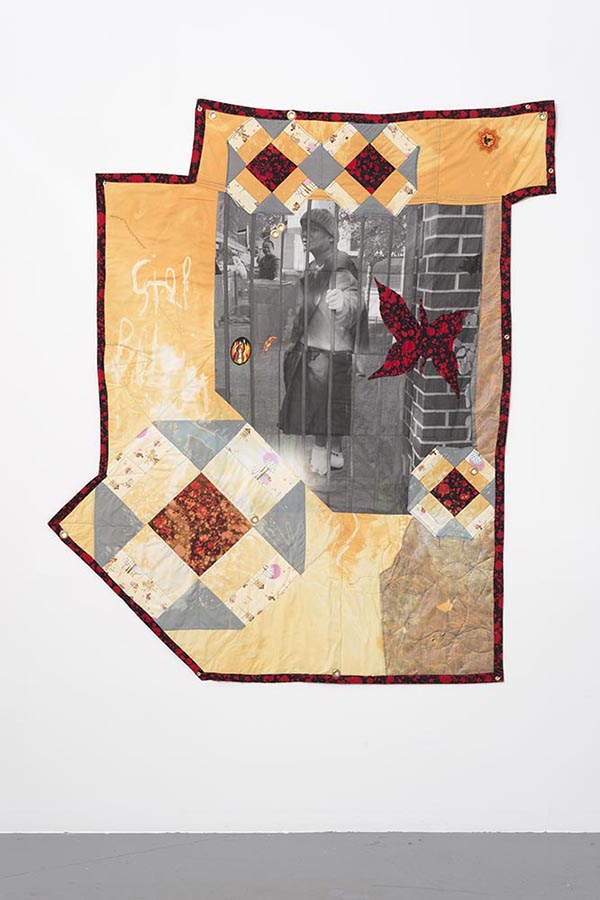 I’ve really only been making photographs for the past couple of years, and thinking seriously about their medium for an even briefer span. What began as a lighthearted impulse to get men to undress for me was challenged into a more cogent form through recognizing the violence of the cropping frame on eroticized bodies (see Kobena Mercer), the draining echo chamber of the photograph’s reproduction (see Sherrie Levine), and the image and its circulation’s complicity in capital (see Hito Steyerl). Last month, when I tried to get a roll of film developed at this or that drugstore, none still had that equipment (“We just took our developing machine out yesterday,” one clerk told me); this older accessibility to the medium of photography is nearly extinct, succeeded by even more broadly used means of iPhone cameras, selfies, dick pics, Instagram and Google image search. We find ourselves in a torrent (all meanings of the word) of image production, and yet their reliability to represent has been utterly compromised (see David Joselit in the February Artforum linking the Staten Island grand jury’s failure to indict the policeman who murdered Eric Garner to the visual evidence—video footage of a brutal cop pile-on—failing to be allowed to represent these bodies and their violences).

If all these frameworks seem to take the fun out of photography, they don’t. With the photo stripped of its credentials to prove or bear witness, it can be used to speak to its own condition of being made—a self-reflexivity that knows its limits and its capacities for laden pleasure seeking. And whether in modes chemical or digital, the effect of production is an elemental engagement between a body and light: the artist manipulating light beams in her darkroom, the street documentarian stalking by day, or the cool glow of the computer screen backlighting the image as it is edited into its final form. If you’re watching “Scandal,” you’re used to Olivia Pope’s hope for an alternative to political dirty dealings, where she invites us to “stand in the sun” with her. I’m looking for the artistic ethical equivalent where, rather than presuming what image-objects should evidence, makers and viewers can stand in the sun. 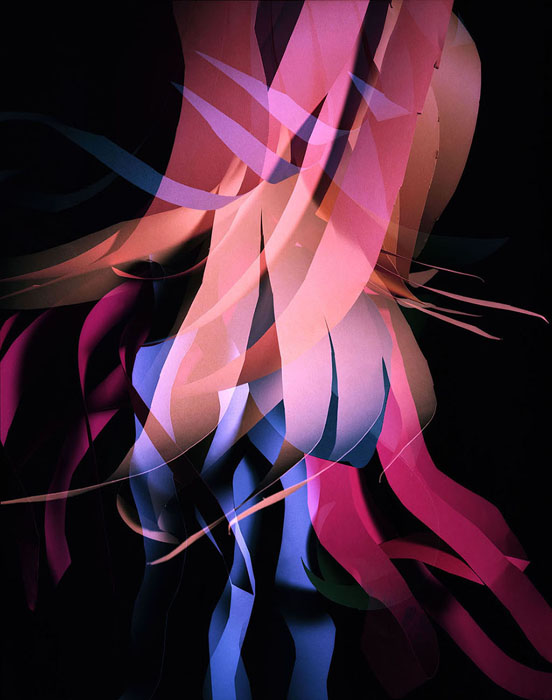 Risking “a quite ludicrous analog nostalgia” that Steyerl and Claire Bishop have attributed to anachronistic resistance to the Internet’s degraded image banks, Jessica Labatte’s exhibition “Underwater Highway” at Western Exhibitions moves deftly between studio photography, darkroom alchemy and Photoshop toolboxes. The resultant images are dense and satisfying, in part because they do little more than aestheticize the processes by which they are realized. The “Pond Weeds” are carnivalesque (all meanings of the word) color photographs that play like Francis Bruguière’s cut paper abstractions further abstracted through multiple exposures and shifting light sources. Here, Labatte shows herself entangled in the seaweedy lagoon of a century’s worth of experimental photo techniques, and her discerning taste and jubilant instincts cut across traditional forms. Her “Spotting” works are labor-conscious, Marxist fantasias; their busy scribbled surfaces the result of making visible layers of her assistants’ spot editing in Photoshop. Most earnest are the small silver gelatin prints titled for the mineral deposits bonded to the surface through chemical emulsion processes (“Turquoise,” “Hematite & Black Tourmaline”). Labatte’s retreat-to-move-forward reflections are physicalized in brooding little sheets that show the artist getting the earthy real world to attach to the picture. 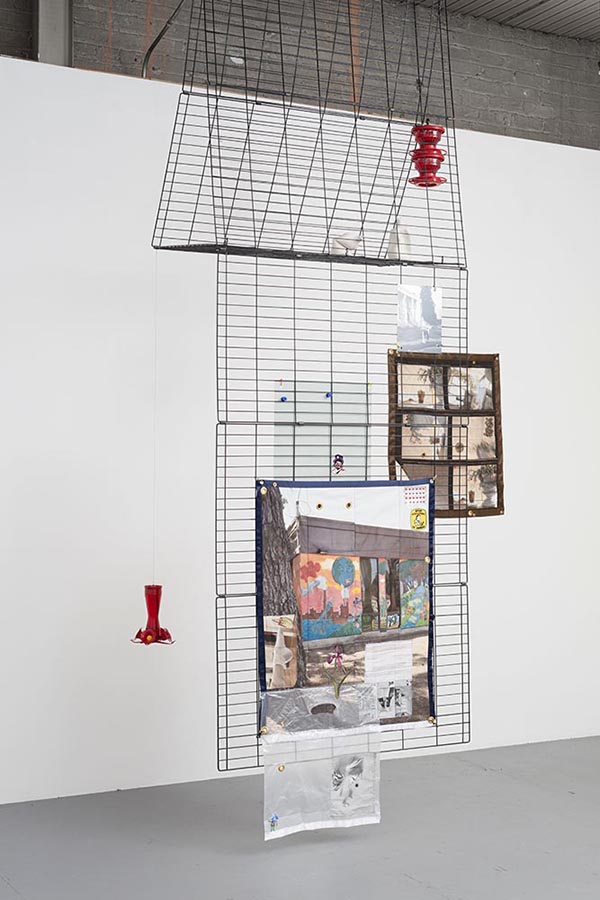 Erin Jane Nelson’s junk-shot candor at Document drags and drops the excesses of too many tabs open in a browser into a delightfully charged physical treatment of images. Her street photography that records her daily West Coast commutes are embedded into an installation of quilts and cages. Nelson’s work cozies up to discomforting depictions of how workers’ conditions have followed those of the jpeg: hyper-mobile, disposable, replicable, virtually temporary. These are story quilts depicting the harrowing edge of post-Internet art (see Artie Vierkant’s “The Image Object Post-Internet”): how we’ve learned from our own technologies new, spectacular ways to devalue the social-public and individuals who mark out relations within networks. Nelson’s Sanford-Biggers-punk-house-home-décor are reminiscent of the ways Luis Molina queerly decorated his half of a prison cell in Héctor Babenco’s “Kiss of the Spider Woman.”

Speaking of networks, Adds Donna has tapped theirs, currently hosting a group show of works by the collective of artists who operate Essex Flowers, a great project space in New York’s Lower East Side, located in the basement of a flower shop. I love everything about this space, and one of Flowers’ own, Kendra Jayne Patrick, has curated a bright assortment that ranges from monochrome painting to cast silicone body parts. Nearly all the works are lovable, but several in particular—especially through their relations to one another—cast a light (ha) on how to approach imagining images.

Tatiana Kronberg’s photogram rests in the corner where wall meets floor, its surface alive and kicking with a woman’s limbs akimbo, adorned with botanical laurels silhouetted in white against a glossy black field. The nonchalance of her crumpled display shows women doing it for themselves, against a history of these sorts of female-body-as-object photographic imprints in more austere works like Yves Klein’s or Robert Rauschenberg’s cyanotypes. Lizzie Wright’s nearby bricolage shrines “Venus” and “Bachelor” complete the scene with each emanating their own light sources. The two might be in competition to illuminate Kronberg’s lady-wraiths. “Venus” is a sweet but unsentimental totem with seashell nightlights serving both as a mermaid’s brassiere and mismatched glowing eyes in an oval glass face; as seen in Magritte’s 1934 “Le Viol (The Rape),” there’s power, charm and wit in conflating the gaze with erogenous body parts. Weird faces, new sights and particularly frameworks for how women look (all meanings of the verb) occur throughout the exhibition, including Heather Guertin’s goofy, grim abstracted facial expressions. Amanda Friedman’s “Timekeepers” mark out mystical eyes across all sorts of metal lids and discs, an extensive calendar of the artist’s aging, looking back at her from a densely painted, crowded array.

“Whoever is an image is an object. Whoever is not an image raise their hand. Images have permeated our environments since [a] long time ago. They crossed screens and incarnated: as junkspace, and all sorts of 3D spam. They materialised in form of our own bodies… So it’s not about object-ontologies but image-actions, image-gestures, thing-affinities, chains of reaction of objects, forces, and pixels, that manifest in scars and bruises, but also sometimes in the liquid harmony of the floating world of images.” So said Hito Steyerl in a 2013 interview for Rhizome. So if image-actions don’t prove, don’t represent, what do these shows show them doing? It seems they bury (under mineral dust and untamed consumer associations). They reinvent what it means for the camera to capture, not to document but to ensnare in the tenuousness of a rat-race, hamster-wheel, freelance economy. They make their own light and sunbathe across themselves. They scuttle from darkrooms and even darker rooms, out into the sun, where Photoshop fictions, multiple exposures, double-takes and reconfigurations of figures are a more flexible and functional form of truth.