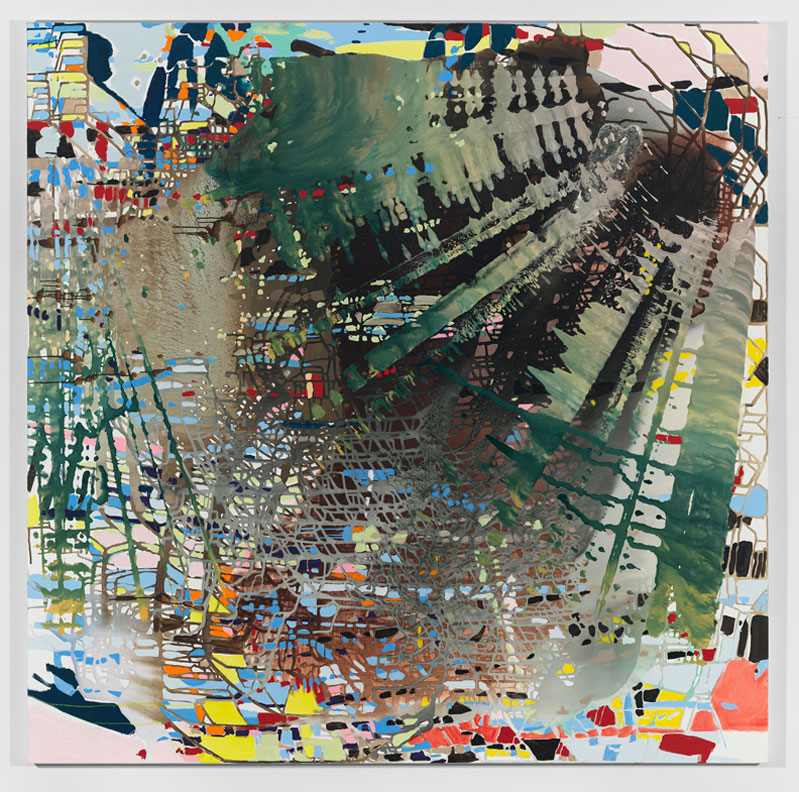 Part of their “March Trifecta” of exhibitions, Jackie Saccoccio’s new all-over paintings are unified by a concentrated hovering apparition. The subtractive process of layering paint passages evoke openly flayed nervous systems in controlled pours, drips and squeegeed treatments of indulgent color palettes. Saccoccio’s “Square in Hole” is an enthralling break from negotiating potentially formulaic x and y-axis of “portraits.” Vectors of negative space between drips are exuberantly dashed-in. Paintings hung strategically in succession push the threshold of what one wall should be made to carry. Expansiveness and restraint are emphasized. 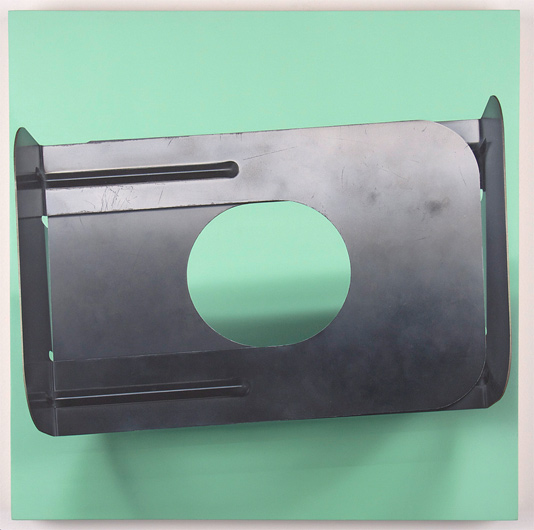 Matthew Metzger’s three excruciatingly detailed paintings of metallic black bookends hovering over mint green backgrounds reference jazz composer Anthony Braxton’s “For Alto.” Metzger’s exhaustive research at the intersection of symbolism and abstraction connects Braxton’s music philosophy with stand-ins for the virtuoso body or breath. Bookends poise to function much like Lygia Clark’s “Hand Dialogue,” 1966—inside the elastic Möbius strip, participants are locked together in perpetual conversation. Braxton’s solo saxophone LP is revolutionary yet esoteric as is Metzger’s labor to produce such devotional surfaces. Paradoxically, the paintings could not be further from improv itself. Instead these frame a conversation about the act of translation: performance filtered through mimesis to embody literal space packaged and distributed as static archive.

Morris Barazani’s vintage Modern works harken back to a time when abstraction was still new, vulnerable and idealistic—nostalgic for a time when Russian Constructivism and the New Bauhaus pioneered by Moholy-Nagy took root at Illinois Institute for Technology circa 1940. Barazani’s deployment of multiple stylistic modes are resolutely experimental evoking similarity to Franco-Russian painter Serge Charchoune. Barazani’s delicate marks on paper and canvas are still brave in a brutal world. This selection crystalizes a moment in modernism before Ab-Ex took hold and changed the trajectory of abstraction as we know it, of which Saccoccio and Metzger are inheritors. Buried beneath upheld conventions of the market, the philosophy of each of the three artists on view is driven by mutualism of self-sufficiency and the urgency of improvisation. (Nicole Mauser)

Through April 25 at Corbett vs. Dempsey, 1120 North Ashland