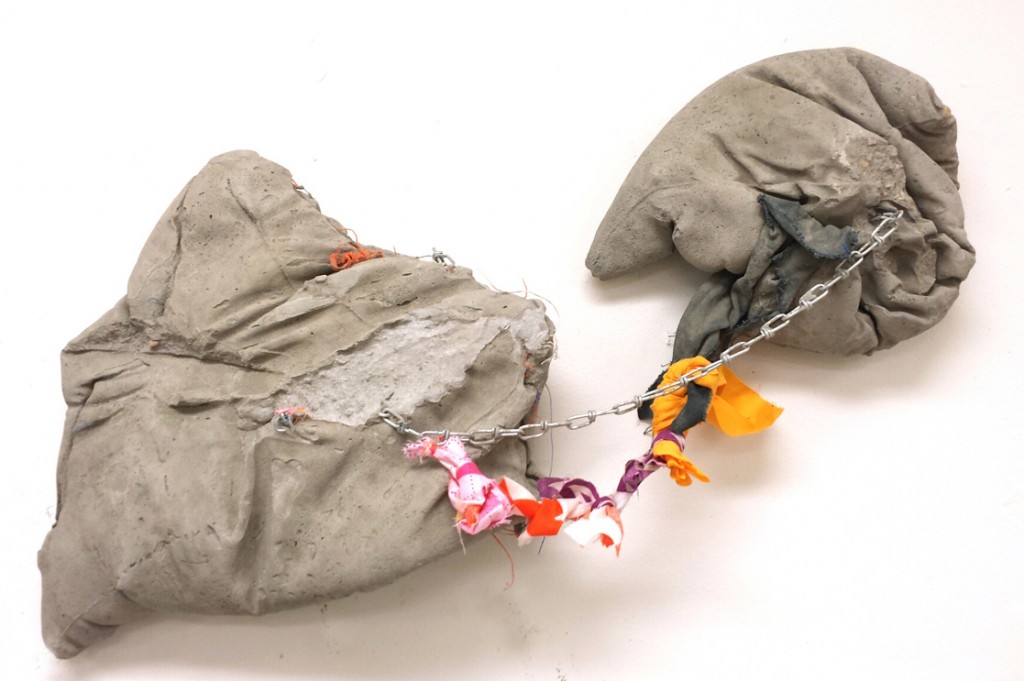 Luis Sahagun. “Imprints of a Broken Lover” 2015
chain and fabric on concrete

Appropriately titled “Escombros” or “rubble,” what Luis Sahagun’s new show at Kruger Gallery lacks in formal elegance, it effectively delivers in expressive force. Born in Guadalajara, Mexico, this Chicago-based artist conjures a remarkable variety of sculptural form from the damaged and discarded. Wood, metal, plaster, concrete and copious amounts of cardboard are fused into ungainly objects that suggest their origin as urban detritus while obliquely pointing to Sahagun’s experiences as an undocumented immigrant.

“A Disfigured Desire with an Intimate Blow” is a pulse-quickening claustrophobic installation in a plywood room that features a looped video and a suspended boxer’s heavy bag made of sheet metal, wood scraps, drywall and cardboard. Brimming with sharp edges and rusty nails, the object’s menace is exacerbated by the flickering two-channel video depicting Sahagun repeatedly punching the “bag.” On the floor, crumbled remains of drywall and a boxer’s glove evidence the perilous conflict. As a metaphor for struggle and determination (even when the effort is self-destructive) the piece is unrivaled by anything I’ve seen this year.

Less dramatic, but no less affecting are the delicate material relationships that comprise “Imprints of a Broken Lover.” Consisting of two concrete forms connected by metal chain and fabric ribbons, the work contrasts hard versus soft and warmth with frigidity. Despite the weight of its materials, “Imprints” seems on the verge of ascent, the gallery wall barely able to restrain it. Like its more assertive cousin, the work’s embodiment of the ebb and flow of human emotion is superior.

While the high points of this exhibition are indeed high, there’s a share of misfires that one must wade through to get there. A series of small melted-wax-on-paper works as well as the toy-like winged dragon “Entre Tocallos” are head-scratchingly out of place in an exhibition that emphasizes material grit and a bodily scale. Like many young (and more than a few established) artists, Sahagun’s thesis is probably best represented by fewer works in larger group shows. Despite this, “Escombros” manages to deliver some genuine emotional impact, which in today’s art world is success enough. (Alan Pocaro)

Through May 2 at Kruger Gallery Chicago, 3709 North Southport